Launching at Pickwick State Park in Counce, Tenn., the angler from Brandon, Miss. finished with a perfect 2-day limit of 10 bass weighing 25.94 pounds. He bested his nearest competitor by more than three pounds. For the victory, the Mississippi Division 12 Angler of the Year collected $2,700. He added a $500 bonus for using Garmin products to give him a total of $3,200 in winnings. 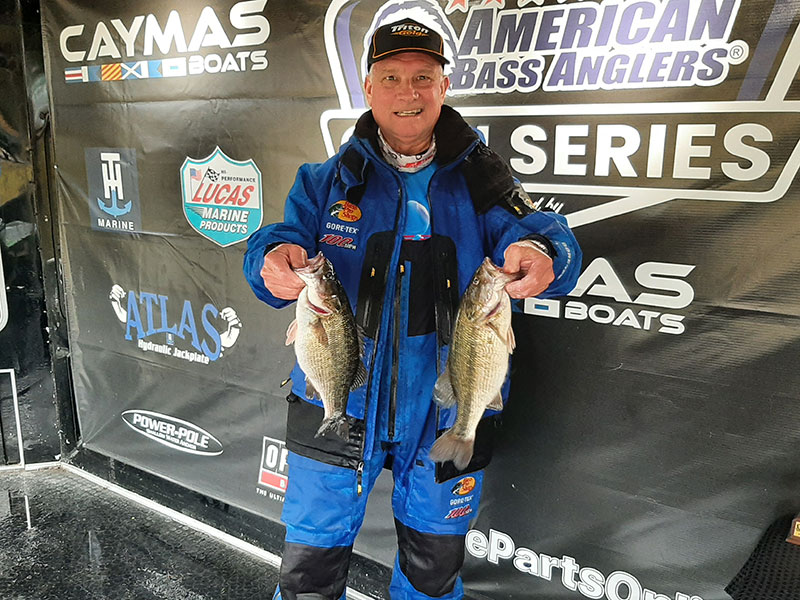 The only boater to bring in two consecutive 5-bass daily tournament limits, Allen brought in 14.76 pounds on the first day to take the early lead. That Day 1 catch gave him the third largest single-day sack caught in the tournament and put him in the lead by more than three pounds. He never relinquished the lead.

“On the first day, I caught four fish on a Berkley Cane Walker topwater bait and one on a Strike King KVD Deep Jerkbait,” the new champion recalled. “I only had five keeper bites and they were all largemouths. I also caught two short fish.”

Allen landed his second limit of five bass on the final day. Those keepers dropped the scale to 11.18 pounds for a total of 25.94 pounds and the championship win.

“On the final day, some leaves blew in on my spot, so the Cane Walker topwater bait wouldn’t work in the leaves,” Allen said. “I fished some windy points in Yellow Creek with the Cane Walker. I caught six keepers on the Cane Walker and one on the jerkbait.”

Joshua Cameron made a big jump on Day 2 to take second place among the 24 boaters in the tournament. The angler from Meridian, Miss. finished with seven bass weighing 22.56 pounds. He anchored that catch with the tournament lunker, a 5.43-pounder. Cameron went home with $1,500 for second place and a $240 big bass bonus. 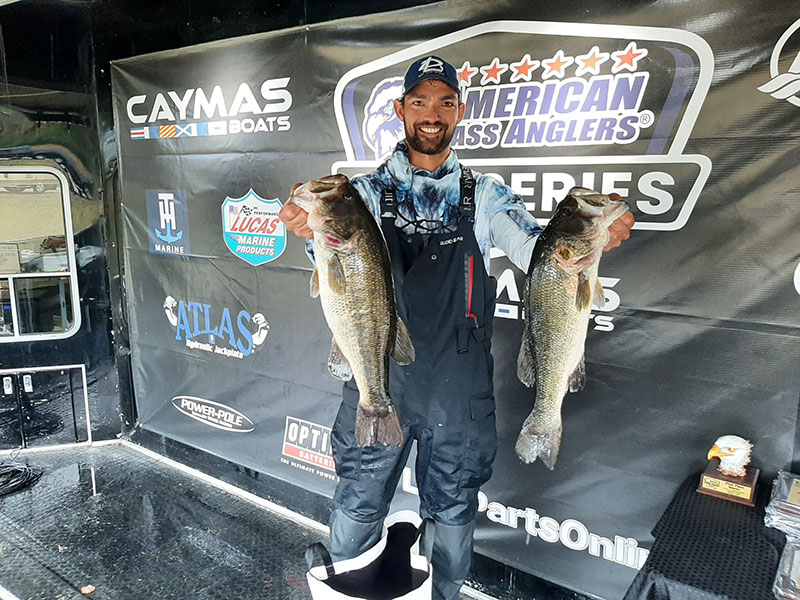 “It was a hardcore grind,” Cameron admitted. “On the first day, I caught a bunch of short fish up shallow in the grass. Mostly, I threw a topwater bait.”

Cameron held 11th place on Day 1 with two bass going 5.66 pounds. On the second day, he caught a 5-bass daily tournament limit for 16.90 pounds, the largest single-day sack weighed in the event. He capped that bag with the 5.43-pound tournament lunker. That shot him up nine levels into second place.

Following close behind, Tony A. Tidwell from Horton, Ala. finished third with seven bass at 21.86 pounds. The North Alabama Division 1 Angler of the Year and the newest inductee into the ABA Bass Anglers Fishing Hall of Fame earned $800 for third place. 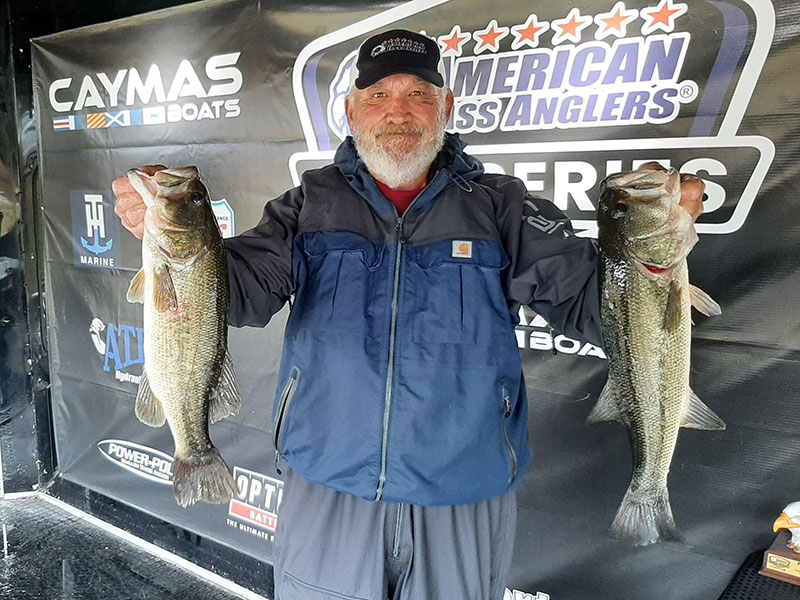 “I was really surprised with the nomination and being accepted into the Hall of Fame,” Tidwell said modestly. “I’ve fished ABA since 2005. I’ve always looked up to the people in the Hall of Fame as the ‘Elders in the Tribe’ with a lot of wisdom and knowledge to share.”

Tidwell sat in 10th place, just above Cameron, on Day 1. That day, he landed two keepers weighing 5.77 pounds. Also like Cameron, he came in with a huge sack on Day 2, the second heaviest bag in the tournament with five bass at 16.09 pounds. He anchored that sack with a 3.95-pound kicker. With that, he made the seven-level leap into third.

“I did the same thing both days in the same areas,” Tidwell explained. “On the first day, I fished grass, but the water dropped. I hit some places that I caught fish in the past, but they weren’t there. I caught two small keepers and some short fish. By the second day, the water came up a couple feet overnight. On my sixth cast of the day, I had my first keeper. We stayed in the same area all day, just working it back and forth.”

Coming in fourth, Brent H. Barnes of Chattanooga, Tenn. found nine keepers for 20.14 pounds. He picked up $700 for the effort.

Barnes sat in third place on Day 1 with a 5-bass limit weighing 11.31 pounds. He caught four fish for 8.83 pounds on the final day to drop a notch to fourth place.

Rounding out the top five boaters, Roy L. Galbraith from Guin, Ala. held the position both days. He caught two bass for 8.47 pounds on Day 1. He anchored that catch with a 5.25-pounder, the largest bass caught on the first day and second largest in the tournament. Galbraith caught a 5-bass limit on the final day for 11.03 pounds, giving him a total of 19.50 pounds. That put $500 in his pocket.

In the Co-Angler Division, Ethan T. Shaw of Raymond, Miss. also scored a wire-to-wire victory. Shaw finished with three bass weighing 12.05 pounds, the only co-angler to break into double digits. He also took co-angler lunker honors with a 4.98-pounder. Shaw won $850 for the victory and an extra $75 for the big bass. 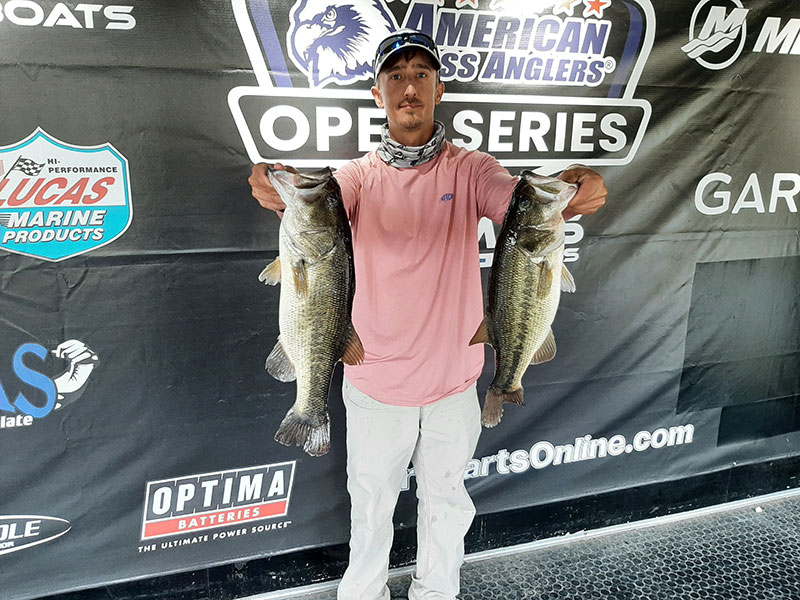 On Day 1, Shaw led with two keepers for 9.18 pounds. That gave him a 4.59-pound average and bragging rights for the heaviest single-day bag caught by a co-angler in the tournament. Topping that sack with the 4.98-pound lunker helped the average. His other Day 1 bass weighed 4.20 pounds.

“On the first day, I caught several short fish,” Shaw described. “I caught my first bass on my fifth cast in the morning. At about 9:30 a.m., I definitely had one much bigger than the lunker I caught come off at the boat. We were sitting in 30 feet of water throwing up very shallow right by bluff banks. I fished a drop-shot rig.”

“On the second day, I fished a ChatterBait,” Shaw said. “I caught my only keeper of the day on my second to last cast. I caught a couple short fish both days. “ 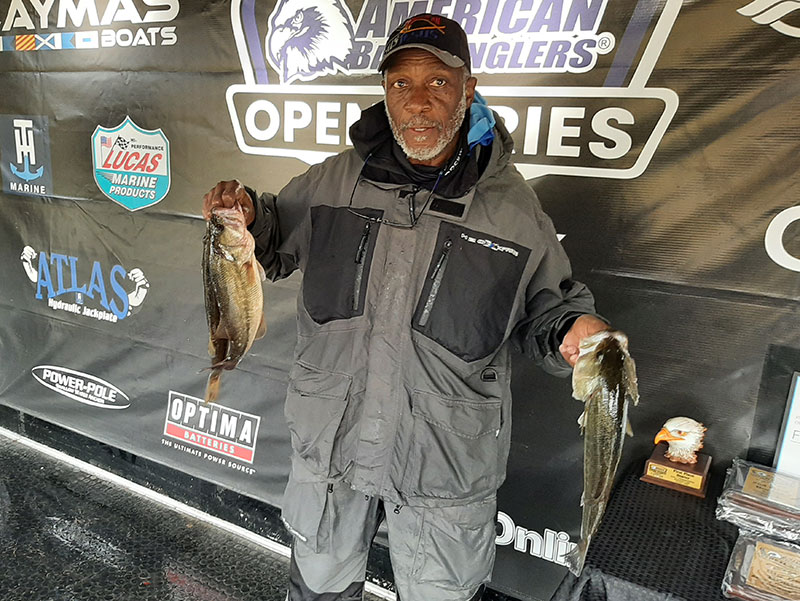 Luckett held sixth place on Day 1 with one 2.52-pound bass. On the second day, he caught a 3-bass daily tournament limit weighing 5.81 pounds to jump up four slots.

“On Day 1, I threw a spinnerbait,” Luckett revealed. “I caught my one keeper around noon. I caught a couple of short fish. On the second day, it was a mixed strategy. I caught one on a spinnerbait, one on a shaky head and a third bass on a shallow-running crankbait.”

Placing third among the co-anglers, Duane Parker from Calhoun, Ga. found four keepers for 8.27 pounds. He walked off $350 richer.

Parker sat in second on Day 1 with two bass weighing 4.78 pounds. With two more bass on the second day, he added 3.49 pounds, but dropped a rung to third.

“On the first day, I started fishing topwaters, but that wasn’t happening,” Parker commented. “I caught one keeper dragging a jig and one on a Ned rig. I was fishing shallow around rocks or wood. On the second day, it was all topwater. The rain we received helped the topwater bite.”

Scott A. Norman of Acworth, Ga. landed in fourth for the co-anglers with three bass and 7.49 pounds. He held fifth on Day 1 with one 2.97-pound bass. On the second day, he caught two bass going 4.52 pounds to move up one level.

George “Joe” L. Schonhoff came over from Slidell, La. to take the fifth spot for the co-anglers with three bass at 7.30 pounds. After blanking on the first day, he landed a 3-bass limit on the second day to advance into the top five.

This championship featured the best anglers from the North Alabama Division 1 and Mississippi Division 12. To fish these championship events, anglers must have participated in at least three events in their respective divisions during the regular season or a combination of four events with two each in the divisions participating in the championship.

Competitors earn points in these events added to the points they already accumulated throughout their division seasons. At the conclusion of the 2-day regional championship tournament, the top five points holders from each division will earn a slot to the 2023 Ray Scott National Championship.

Anglers may qualify for bonus money offered by such tournament sponsors as Caymas Boats, Mercury Marine, the T-H Marine Atlas Awards program, MotorGuide, and Power Pole. Anyone who qualifies for Caymas Cash rewards could receive up to $7,000 for winning any ABA Open Series event. If the winning boat carries a Mercury motor, the angler could receive an extra $1,000 in cash from Mercury Marine. If that boat comes with a MotorGuide Trolling Motor, the angler could win an additional $500.

See each manufacturer’s website for details, rules and qualifications for more information on their contingency programs.

For more information about this tournament, call Tournament Director Floyd Vaughn at (256) 230-5633.