EUFAULA, Ala. – Michael M. Smith brought in the largest bag of the tournament on the final day to convincingly win the Boater Division in the American Bass Anglers Open Series, Presented by Caymas Boats, 2-day Area 3 Championship, held Sept. 24-25, 2022, at Lake Eufaula. 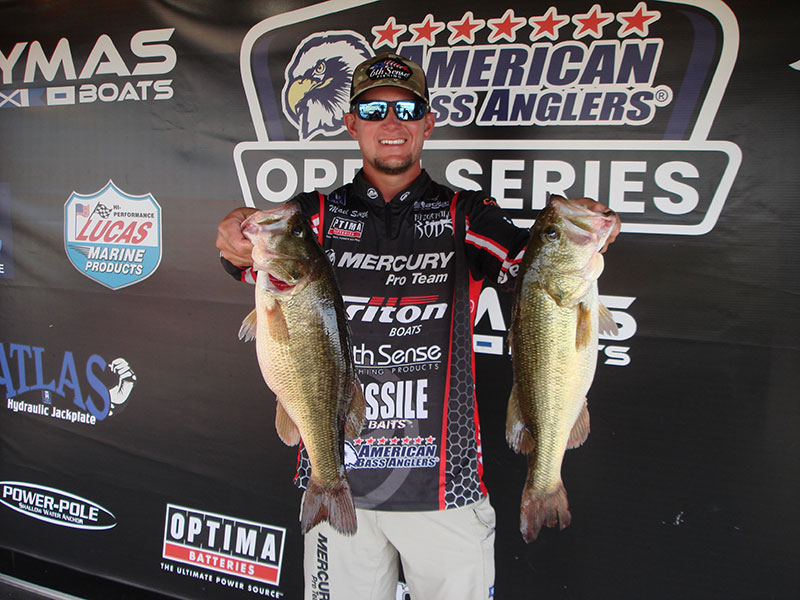 Smith, from Andalusia, Ala., defeated the boaters representing the Alabama South Division 2 and Georgia Division 8 by landing a perfect 2-day 10-bass limit weighing 35.73 pounds. That bested the nearest competition by more than seven pounds. Smith finished with a 2-day average of 3.57 pounds per fish.

Holding a slim lead of less than two ounces on Day 1, Smith landed a 5-bass daily tournament limit for 15.40 pounds, the second largest single-day bag caught in the tournament. He anchored that bag with a 4.06-pound bass, the largest fish brought to the scales on Day 1.

“I found about 15 really good schools of fish in the mid-lake area,” Smith revealed. “On the first day, they were only on about half of those spots. Mostly, I caught fish on 6th Sense DD 300 crankbaits. I also caught a few on a drop-shot rig. I caught a big one on 6th Sense flutter spoon.”

On the second day, Smith strengthened his lead dramatically. He landed another limit for 20.33 pounds, nearly five pounds heavier than any other single-day bag. In addition, he capped that catch with a 4.79-pounder that won the Boater Division lunker honors.

“Where I caught fish on Day 1, they weren’t there on the second day,” Smith acknowledged. “The places where I couldn’t find fish on the first day were loaded with bass on the final day. I used the same baits both days. I just kept rotating through spots.”

Maintaining second throughout the event, Kenny M. Carroll of Opelika, Ala. finished with a 10-bass 2-day limit for 28.29 pounds. On Day 1, Carroll tallied 15.29 pounds, and the third largest single-day bag landed in the event. He anchored that bag with a 3.61-pound kicker. On the second day, Carroll caught 13 pounds.

“We fished water 12 to 20 feet deep in the mid-lake area with Carolina rigs and crankbaits,” Carroll remarked. “I caught a couple on jigs. I did lose a big one on the final day, but it wasn’t big enough to make a difference.”

Chandler A. Ray from Bainbridge, Ga. moved up one spot to finish third among the boaters with 10 bass going 27.35 pounds. Ray held fourth place on Day 1 with 14.09 pounds including a 3.66-pound kicker. He added 13.26 pounds, the second largest single-day sack, on the final day.

“I fished from the marina to the dam,” Ray commented. “I stayed in 15 to 25 feet of water. I had six bites each day cranking a big plug for two days. I saw a lot of fish, probably more than I’ve seen in the past three years. They just wouldn’t bite what I was throwing. When I did get a bite, it was usually a quality fish.”

David J. Pair from Abbeville, Ala. finished fourth for the boaters with nine bass and 23.07 pounds. He caught a 5-bass limit weighing 11.39 pounds to hold sixth place on Day 1. On the second day, he landed four bass going 11.68 pounds to advance by one slot.

Making a big leap on the final day, David W. Parsons of Dothan, Ala. finished fifth for the boaters with eight bass at 20.34 pounds. Parsons caught four bass for 9.50 pounds and 11th place on Day 1. He anchored that bag with a 3.92-pounder. Parsons brought in four more keepers for 10.84 pounds on the second day to hop six rungs.

In the Co-Angler Division, William B. Wood from Sylacauga, Ala. won with two straight 3-bass daily division limits for 15.26 pounds. On the first day, Wood held third place with 7.55 pounds including a 2.79-pound kicker. Jumping two spots on the final day, Wood brought in 7.71 pounds with a 4.41-pound kicker. 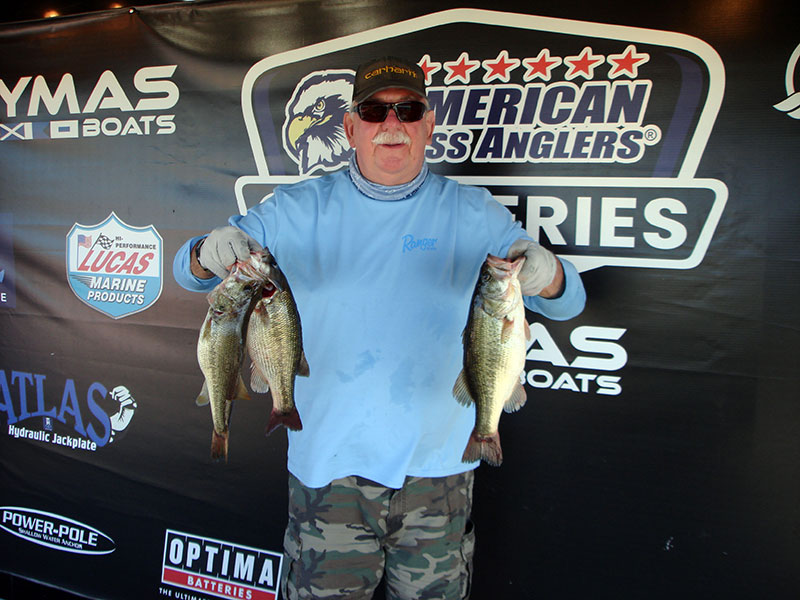 “I caught my fish on a shaky head and a NetBait plastic worm,” Wood detailed. “I fished both deep and shallow. On the first day, I caught them in 14 to 20 feet of water. I caught them shallow the final day.”

Joe L. Chilcott of Williamson, Ga. stayed in second place among the co-anglers throughout the tournament. He finished with five bass weighing 11.94 pounds. Chilcott caught a 3-bass division limit for 8.81 pounds on Day 1. He landed two bass weighing 3.13 on the final day to maintain his position.

“The final day was a struggle,” Chilcott admitted. “I only caught two fish and both were small. On the first day, I caught my fish on offshore ledges. We tried to fish shallow, but that didn’t pan out.”

Slaton caught a 3-bass limit on the final day for 10.04 pounds, the second largest single-day bag in the tournament. One of those bass weighed 5.44 pounds and took the tournament title. 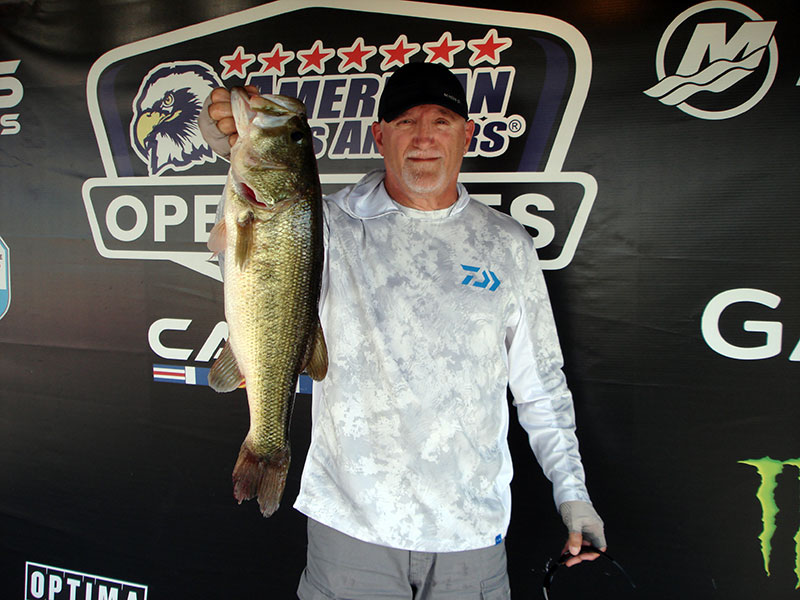 “That big bass hit a 5-inch Scottsboro Tackle swimbait in about 30 feet of water,” Slaton said. “I just let the bait fall to the bottom and reeled it slowly. The bass just made a light tick when it hit. Then, it started coming toward me so I wasn’t sure how big it was. We fished ledges all day. On the first day, I caught one fish on a frog. On the second day, I caught one fish on a jig, one on a shaky head, and the big one on the swimbait.”

Buck S. Hilliard of Peachtree City, Ga. finished fourth for the co-anglers with five bass weighing 10.55 pounds. He caught two for 3.69 pounds and sixth place on Day 1. He landed a limit going 6.86 pounds on the second day to move up two levels.

For more information about this tournament, call tournament director Billy Benedetti at (256) 230-5632. 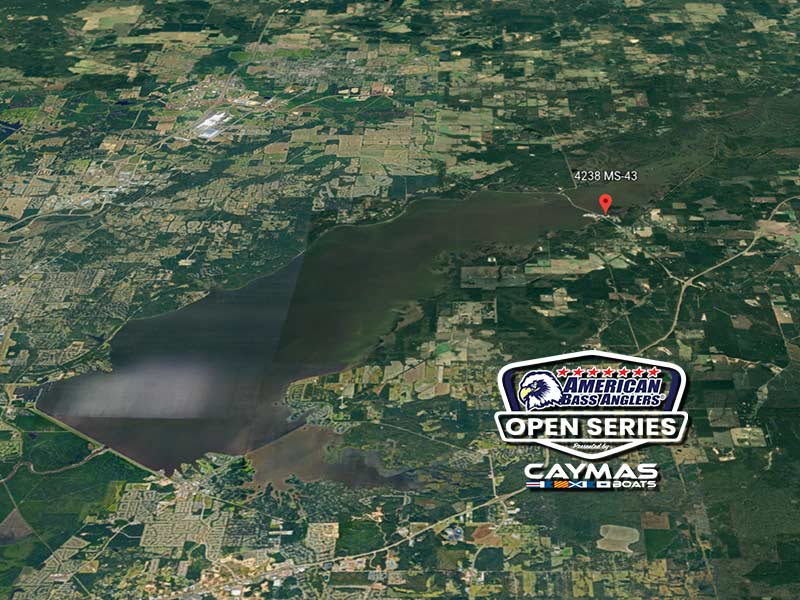 Mississippi Kicks Off 2023 On Ross Barnett

The Mississippi Division 12 of the American Bass Anglers Open Series Presented by Caymas Boats opens the 2023 season on Ross Barnett Reservoir near Jackson, MS on February 19. The bass tournament will launch from Tommy’s Landing, located at 4238 Mississippi Highway 43 in Brandon, Miss. 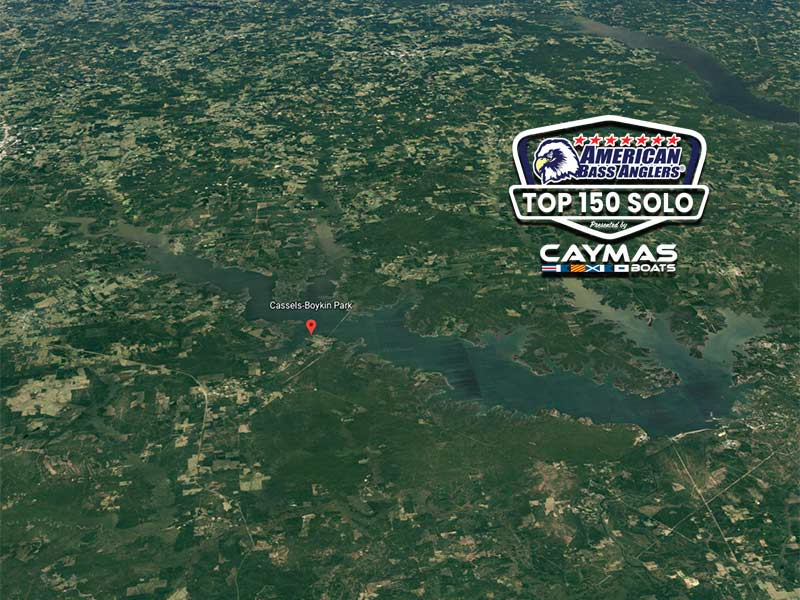