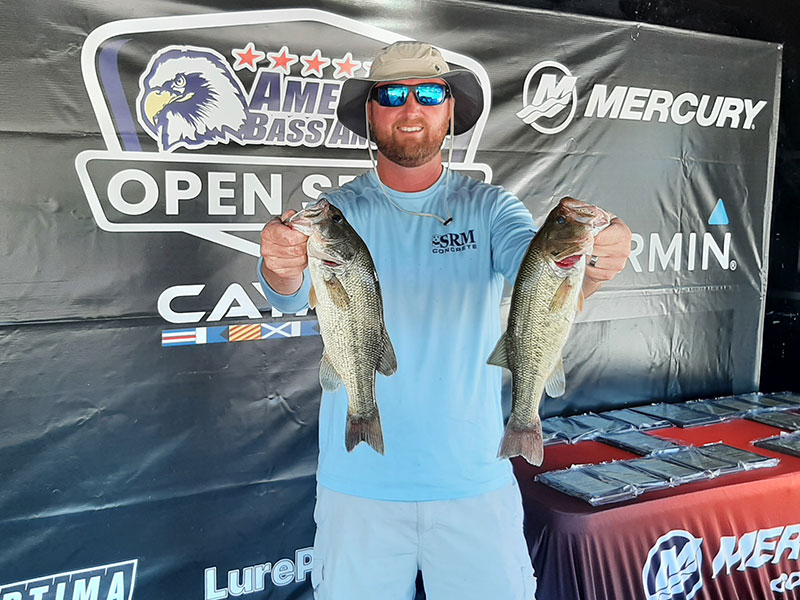 The anglers fishing the Tennessee Central 3 and Tennessee East 4 Divisions ran out of Flippers Bait and Tackle ramp in Gallatin. Boggs, from Lebanon, Tenn. finished with nine bass weighing 18.23 pounds. He collected $1,700 for the win, a $500 bonus for using Garmin electronics and earned enough points to win his division Angler of the Year title. 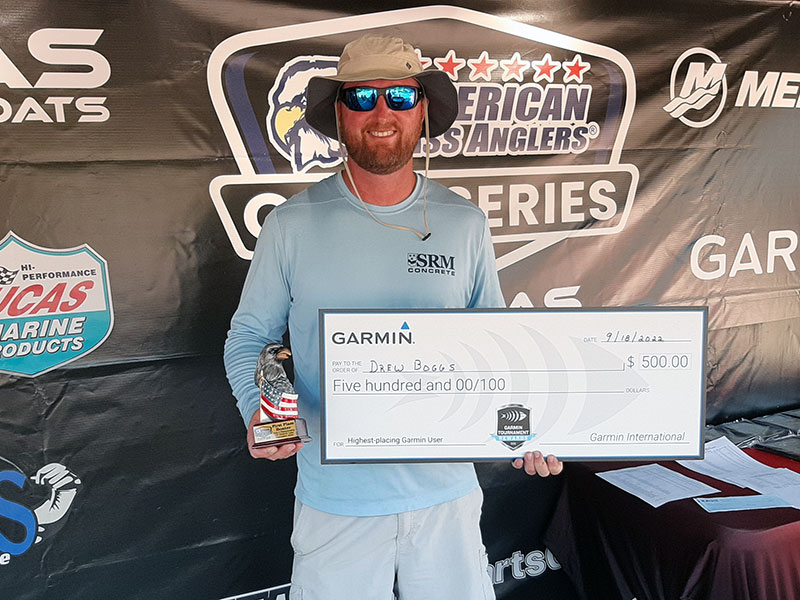 “It was a blessing to catch five good keepers on the second day,” Boggs confirmed. “I caught seven fish total on the last day. I had some trouble losing fish on the first day. On the second day, I caught two on a buzzbait early and the rest flipping. We were fishing really shallow.”

Boggs sat in third on Day 1 with four keepers at 9.11 pounds with one 2.97-pound kicker. He caught all his fish by flipping shallow cover. Fishing consistently, he brought in five bass weighing 9.12 pounds on the final day.

“I caught everything I weighed on the first day by flipping,” Boggs described. “I lost a nice keeper cranking and three more flipping.”

Joel M. Trevino from Mount Juliet, Tenn. finished second with eight bass and 16.98 pounds. He led the first day with a 5-bass daily tournament limit going 10.31 pounds. He anchored that bag with a 3.10-pounder. He brought in three bass for 6.67 pounds on the last day, dropping one notch.

“On Day 1, I was fishing shallow grass and caught a few,” Trevino recalled. “Then, I transitioned to fishing a little deeper with a shaky head worm. We had to slow down the presentation to get the bites. On the second day, I had the bite I needed, but just couldn’t get it in the boat. I was fishing shallow. My 3-pounder came off a shaky head and worm. I caught my first two bass flipping.”

Conoly Brown from Brentwood, Tenn. moved up to the third spot with seven bass at 14.91 pounds. Brown held fifth place on Day 1 with three keepers going 6.62 pounds. On the last day, he caught four bass totaling 8.29 pounds with one 2.29-pound kicker.

“I had been catching everything shallow, but couldn’t catch a fish shallow on the first day,” Brown advised. “I went down the lake and fished the drops. On the second day, I couldn’t catch anything on the drops, so I went back shallow and caught all my fish.”

In fourth for the boaters, Eric Silverstrim of Indian Mound, Tenn. finished with eight bass for 14.35 pounds. He held second on the first day with a 5-bass limit going 9.25 pounds. On the first day, he suffered mechanical issues and ran 12 miles on his trolling motor powered by Optima Batteries, He caught three bass for 5.10 pounds on the second day, dipping two levels.

“On the first day, I fished what was in front of me while running the trolling motor,” Silverstrim explained. “I threw two different colors of Jack Hammer ChatterBaits and a Rat-L-Trap to keep moving. I was lucky enough to catch about 20 fish. I lost a couple fish that would have given me a bigger Day 1 bag.”

Jayson A. Johnson of Smithville, Tenn. finished fifth for the boaters with seven bass weighing 13.40 pounds. He anchored that tally with a 3.27-pounder he caught on Day 1. It took the division lunker honors.

“I caught that big fish on a buzzbait,” Johnson said. “He just sucked it down.”

That big fish helped put Johnson in fourth place on Day 1 with four bass weighing 8.72 pounds. He caught three more keepers on Day 2 for 4.68 pounds. Both Johnson’s big fish and the largest bass caught by a co-angler came out of the same boat.

In the Co-Angler Division, Chris J. Seese of Ten Mile, Tenn. held out to win the wire-to-wire victory with five bass totaling 12.95 pounds. He led on the first day with a 3-bass division limit for 9.35 pounds including a 3.70-pounder. 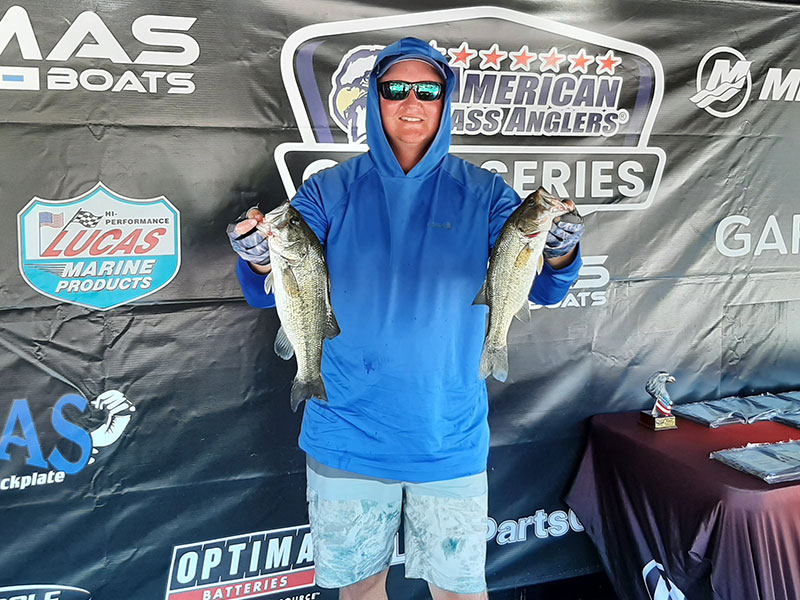 “On the first day, I caught my fish fairly early,” Seese stated. “We pulled into a place with plenty of shad. The bass were chasing them around. I threw a bladed jig. The right quality fish bit for me. I caught 10 keepers. After lunchtime, the bite slacked off.”

On the second day, Seese landed two keepers. His fish weighed 3.60 pounds to give him a victory by nearly three pounds.

“I threw a ChatterBait all weekend and didn’t get a bite on anything else,” Seese revealed. “I caught 10 keepers on the first day, but struggled the second day. I caught two keepers really early. Then, I had a fish pull off, the only fish I lost all weekend. I didn’t get another keeper bite the rest of the day.”

Placing second for the co-anglers, Duane Parker from Calhoun, Ga. found five keepers for 10.37 pounds. He held fourth place on Day 1 with two bass weighing 4.30 pounds including a 2.72-pounder. On the second day, he landed a 3-bass limit for 6.07 pounds.

“We caught fish in a variety of different ways,” Parker said. “We finally figured out a pattern at the end of the tournament when it was time to go.”

Ricky R. England from Sparta, Tenn. held third among the co-anglers for both days. He finished with four bass weighing 10.06 pounds, but one of them tipped the scales to 4.93 pounds and took the tournament lunker title. England fished with Jayson Johnson on the first day when he caught the big fish, his only fish on Day 1.

“Catching that fish was a pretty good experience,” England recalled. “Jayson was throwing a buzzbait. I picked up a beaver and dragged it past the edge of a log and she just swam off with it. I caught a couple short fish, but only one keeper that day. On the first day, both big fish in the tournament came out of Jayson’s boat.”

“On the second day, we mixed it up and I caught four keepers,” England said. “I caught fish on a buzzbait, a crankbait and a shaky head.”

Brian M. Haworth from Cookeville, Tenn. finished in fourth place among the co-anglers with three bass tallying 5.98 pounds. He held second on Day 1, but blanked the final day.

“I spent most of the first day fishing banks and laydowns upriver,” Haworth revealed. “I caught the majority of my fish on a Brush Hog. When we hit some water with some rocks, I switched to a square-billed crankbait and caught a lot more fish.”

John F. Roloff from Mount Juliet, Tenn. stayed in fifth place both days. He finished with three bass and 4.94 pounds. On Day 1, Roloff caught two keepers going 2.75 pounds. He added a 2.19-pounder on the final day.

Anglers may qualify for bonus money offered by such tournament sponsors as Caymas Boats, Mercury Marine, the T-H Marine Atlas Awards program, MotorGuide, and Power Pole. Anyone who qualifies for Caymas Cash rewards could receive up to $7,000 for winning any ABA Open Series event. If the winning boat carries a Mercury motor, the angler could receive an extra $1,000 in cash from Mercury Marine. If that boat comes with a MotorGuide Trolling Motor, the angler could win an additional $500.
See each manufacturer’s website for details, rules and qualifications for more information on their contingency programs.

For more information about this tournament, call Tournament Director Floyd Vaughn at (256) 230-5633.