ATHENS, Ala. – Anglers fishing in two eastern divisions in the American Bass Anglers Open Series, Presented by Caymas Boats, will compete in events on June 18, 2022. 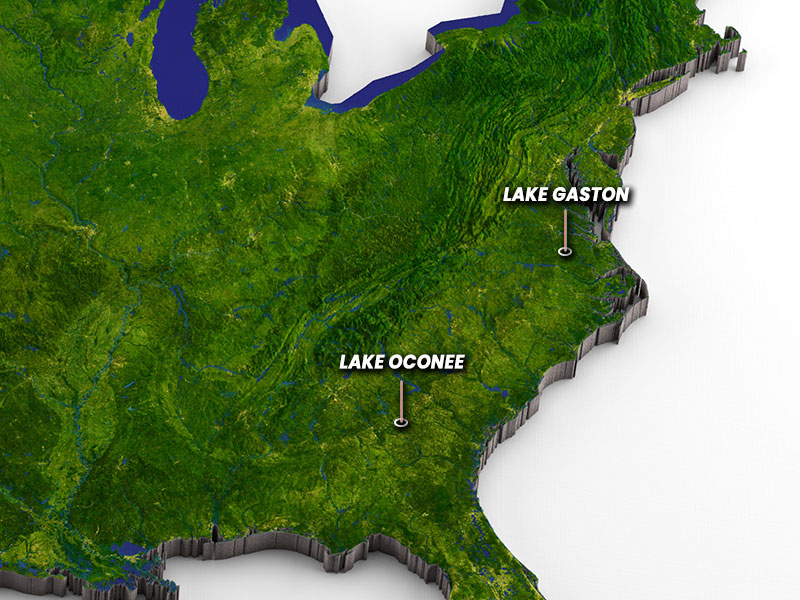 Georgia Division 8
The Georgia Division 8 concludes its regular season schedule on Lake Oconee. The anglers will run out of Sugar Creek Landing, located at 353 Parks Mill Road in Buckhead, Ga. Anglers still have time to register for this event, see www.americanbassanglers.com/proddetail.php?prod=14719.

Created in 1979, Lake Oconee spreads across 18,971 acres of Morgan, Greene and Putnam counties of central Georgia near Greensboro. The second largest lake in Georgia began as a power company reservoir with a dam stretched across the Oconee River. The lake offers anglers 374 miles of shoreline. The Oconee River runs about 220 miles from Hall County, Ga., until it joins the Ocmulgee River to form the Altamaha River near Lumber City.

During a June 12, 2021, division tournament at Lake Oconee, Bradley S. Durden from Atlanta won the Boater Division with a 5-bass tournament limit tallying 14.41 pounds. He topped the catch with a 5.44-pounder that took tournament lunker honors.

In the Co-Angler Division during that 2021 event, Timothy Ben Stone from Conners, Ga. won with a 3-bass division limit weighing 8.72 pounds. He also took the division big bass title with a 4.06-pound kicker.

The division will fish its 2-day championship on Sept. 24-25, 2022, at Lake Eufaula, Ala. That event runs out of Lakepoint Resort State Park, located at 104 Lakepoint Drive near the town of Eufaula. To register for this tournament, see www.americanbassanglers.com/proddetail.php?prod=14720.

For more information about this tournament, call Tournament Director Billy Benedetti at (256) 230-5632.

Virginia Division 19
The Virginia Division 19 will fish its regular season finale at Lake Gaston. The anglers will run out of Summit Landing, located on Bluebird Road in Littleton, N.C. Anglers still have time to register for this event, see www.americanbassanglers.com/proddetail.php?prod=14756.

Straddling the Virginia-North Carolina border, Lake Gaston covers about 20,300 acres. The dam on the North Carolina side of the lake creates hydroelectric power. The reservoir stretches about 35 miles long and offers anglers more than 350 miles of shoreline.

Lake Gaston ranks as one of the best bass lakes in North Carolina or Virginia. Good populations of largemouth and Kentucky spotted bass feast upon abundant bluegill, threadfin shad, alewife, gizzard shad and herring. The lake produces some 4- to 6-pound largemouth and some in the 7- to 10-pound range. Historically, it produced bass exceeding 14 pounds.

Many anglers fish the sand flats or wooded shorelines and deeper creek channels. Pea Hill and Lizard creeks flow into the north side of the lake. On the south side, many anglers fish Lees Creek or Poe Creek.

“I caught all of my fish sight fishing,” White detailed. “I flipped the beds all day and caught about 10 fish.”

Finishing third among the boaters, Shane D. Doughtie of Roanoke Rapids found five good keepers for 14.97 pounds. One of them weighed 5.03 pounds and earned the tournament lunker title.

“I was sight fishing all day with craw baits,” Doughtie said. “I just threw the baits into the beds.”

In the Co-Angler Division during that May tournament, Glenn E. Eskin of Henderson, N.C. landed his 3-bass division limit for 7.29 pounds. He padded that sack with the division big bass, a 3.60-pounder.

Other hot lures in that May event included flukes, brush hogs, weightless soft plastics in and beaver baits fished around docks.

The division will fish its 2-day championship Sept. 17-18, 2022, on the Potomac River. Ala. The event runs out Smallwood State Park, located at 5700 Sweden Point Road in Marbury, Md. To register for this tournament, see www.americanbassanglers.com/proddetail.php?prod=14761.

For more information about this tournament, call Tournament Director Rodney Michael at (256) 497-0967.