ATHENS, Ala. – Anglers fishing the American Bass Anglers Open Series, Presented by Caymas Boats, will compete in multiple events during the weekend of May 14-15, 2022. 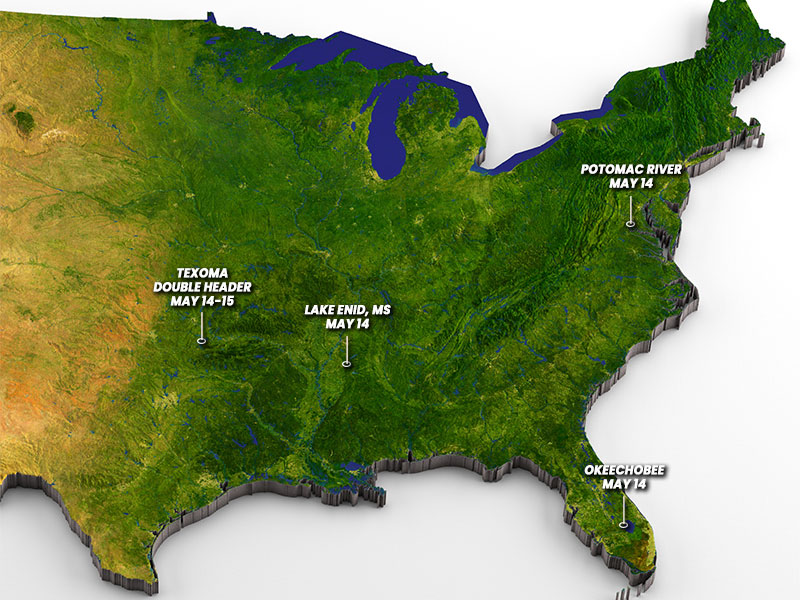 The Florida South Division 7 wraps up its regular season May 14 on Lake Okeechobee. The anglers will run out of C. Scott Driver Park landing, located at 10100 W. Highway 78 in the town of Okeechobee to fish the 730-square-mile lake. To register for this tournament, CLICK HERE.

About the size of Rhode Island, “Big O,” always ranks among the best bass lakes in the nation. The sprawling natural lake consistently produces bass in the 3- to 8-pound range with numerous fish breaking the double-digit mark. The lake record topped 15 pounds. Abundant grass mats and reedy flats dominate much of the lake. Working buzzing frogs over the grass often produces vicious strikes from lunker largemouths.

During a March 26, 2022, division tournament on Big O, Gary K. Milicevic from Labelle won the Boater Division with a 5-bass tournament limit weighing 24.81 pounds. He topped it with a 6.48-pounder for a 4.96-pound average.

“I went to the north end of the lake,” Milicevic stated. “I was hoping to get five big bites. Instead, I got seven. I lost one big fish flipping. I’m not sure how big she was, but I caught another one right after that one and culled a small one. I caught half of my fish on a Gambler jig and the rest on a frog.”

In the Co-Angler Division, Carson L. Yero of Lake Placid brought in his 3-bass division limit for 12.22 pounds and a 4.08-pound average. He also landed the biggest fish caught by any co-angler at 6.62 pounds.

“We went down south to punch mats,” Yero revealed. “We used beavers, Strike King Rage Bugs and a Wyze Guyz Tackle craw. The biggest one hit a Rage Bug at about 8:30 a.m.”

The division fishes it’s 2-day final event on Sept. 17-18, 2022, at Lake Tohopekaliga, also called Toho, at the northern end of the 100,000-acre Kissimmee chain of lakes south of Orlando. That event will launch at Kissimmee Lakefront Park in the town of Kissimmee.

For more information about this tournament, call Tournament Director Billy Benedetti at (256) 230-5632.

The Maryland Division 21 will fish its second event of the season May 14 on the Potomac River. The competitors will launch at Smallwood State Park, located at 5700 Sweden Point Road in Marbury, Md.
One of the most historic rivers in the nation, the Potomac River runs 383 miles from the mountains of West Virginia to Chesapeake Bay. The river drains an area of about 14,700 square miles, making it the fourth largest river on the Atlantic coast and 21st largest in the United States. One of the top bass rivers in the nation, the stream can produce good numbers of bass in the 3- to 6-pound range with some topping eight pounds.

During an April 30, 2022, division tournament on the Potomac River, Robbie L. Henderson of King George, Va. won the Boater Division. He landed his 5-bass tournament limit for 17.43 pounds, anchored by a 4.34-pounder.

“I was fishing grass down south,” Henderson explained. “I also fished a few docks. I only caught six keepers all day. I was throwing a swim jig, a Texas-rigged worm and a ChatterBait.”

In the Co-Angler Division, Craig H. Thomas of Allenwood, Penn. found three keepers going 10.72 pounds with a 3.70-pound kicker. That gave him a 3.57-pound average. He caught all his fish on a green Senko.

Justin T. Moffat from White Plains, Md. placed second among the co-anglers with three bass at 9.94 pounds. He also caught the division big bass, a 4.65-pounder.

Other hot lures for this tournament included lipless crankbaits and creature baits flipped in the grass.

The division returns to the Potomac River for the third event of the season on June 4, 2022. That tournament will also run out of Smallwood State Park. To register for this event, CLICK HERE.

For more information about this tournament, call Tournament Director Rodney Michael at (256) 497-0967.

The Mississippi Division 12 fishes it’s third tournament of the season May 14 on Enid Lake. The anglers will run out of the Wallace Creek ramp in Pope. To register for this event, CLICK HERE.

More known for producing giant crappie, including the world record white crappie at 5 pounds, 3 ounces, the impoundment can also deliver good bass catches. At this time of year, anglers catch many bass by fishing topwaters early in the morning. Then, shift to soft plastics, bladed jigs or spinnerbaits worked through one to four feet of water.

After Enid, the division anglers head to Ross Barnett Reservoir near Jackson on May 28. That tournament will run out of Tommy’s Trading Post in Brandon. To register for the Ross Barnett event, see www.americanbassanglers.com/proddetail.php?prod=14701.

For more information about this tournament, call tournament director Floyd Vaughn at (256) 230-5633.

Texas anglers will fish a double-header on May 14 and May 15, as the East Texas Division 11 goes to Lake Texoma – twice! The division will hold two distinct tournaments, NOT a 2-day tournament, on these days. Both events run out of Highport Marina, located at 120 Texoma Harbor Drive in Pottsboro, Texas.

On Saturday, May 14, the division will fish its originally scheduled season finale. The following day, the anglers will fish a make-up tournament.

Initially scheduled to open the season at Lake of the Pines on Feb. 5, 2022, that event had to be postponed because an ice storm made fishing and driving unsafe. That tournament will now take place Sunday, May 15 at Lake Texoma. Therefore, the original first tournament of the division season now becomes the 2022 regular season-ender,

Impounded in 1944 on the Red River, which forms the border between Texas and Oklahoma, Lake Texoma covers 74,686 acres and drops to about 100 feet deep in places.

“I caught every fish in one hole,” Bean recalled. “On my fifth cast, I stuck a big smallmouth on a jerkbait. He came up twice and threw the bait. I started throwing an umbrella rig. My fifth fish in the boat was the 7.29-pounder to finish my limit by 9 a.m.”

The East Texas Division 11 concludes the season with a 2-day tournament slated for Sept. 17-18 on Lake Palestine. The Lake Palestine tournament will launch out of the Villages Marina, located on Big Eddy Road in Flint, Texas.

For more information about the Texoma tournaments, call Tournament Director Chris Wayand at (256) 230-5627.