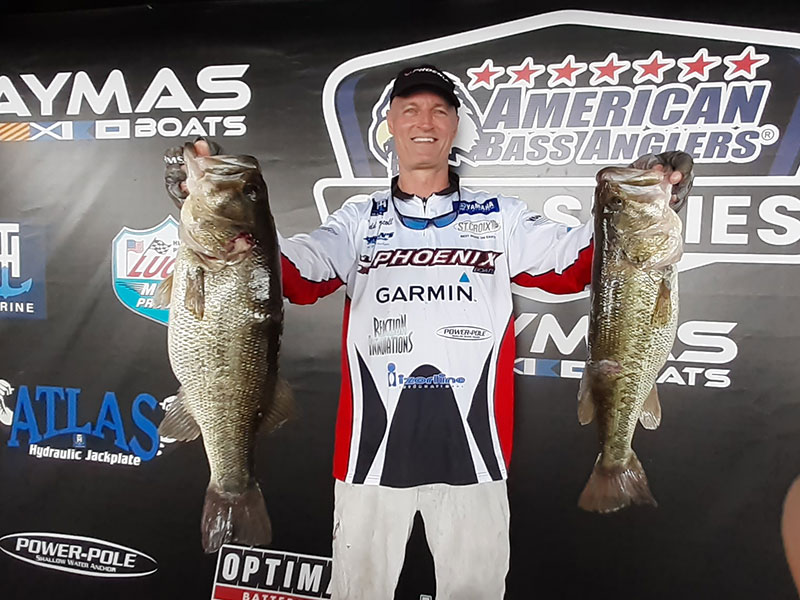 Launching at Cassels-Boykin State Park in Zavalla, the Boater Division angler from Jasper brought in a 5-bass tournament limit for 22.86 pounds. He anchored that bag with a 6.62-pounder that took tournament lunker honors. That gave him a 4.57-pound average. Driscoll won $2,400 as tournament champ plus an extra $460 for the lunker, giving him a total of $2,860 in winnings.

“I practiced for four days,” Driscoll reported. “In practice, I mainly caught fish up shallow, but during the tournament, they were out deep, about 15 to 30 feet. The bass were around wood and brush in the deeper water. The Garmin LiveScope was absolutely the key because we could see which piles were active with bass and which were not. The fish were suspended on top of the brush piles. I stuck with a Zoom Ol’ Monster worm in redbug color. I probably fished about 35 places and caught bass on 10 of them. With that Garmin LiveScope, we can run and gun and see where we needed to fish and where we didn’t.”

In second among the 48 boaters, Clayton C. Boulware of the hosting Zavalla also landed his 5-bass limit for 19.68 pounds. He also placed a 6.17-pounder on the scales, the second largest bass landed in the tournament. He collected $1,100 for the day.

“The fish were setting up in their summer patterns,” Boulware detailed. “We did a lot of running and fished about 25 spots with Texas-rigged worms. Everything I weighed in came on a Mr. Twister Hang Ten 10-inch worm with a 1/2-ounce tungsten weight. We also ran a frog by some cypress trees. I caught fish from four feet deep to 22 feet deep. My two biggest fish came in 20 to 22 feet of water. I caught about 40 keepers.”

Lane F. Anderson from Kountze took third among the boaters. His 5-bass bag weighed 18.27 pounds with a 4.39-pound kicker. He went home with $900 in his pocket.

“I had five different areas with bream beds that I wanted to fish,” Anderson explained. “Only two of them produced. They were all in six to 12 feet of water. I hit them early, running and gunning with an Azuma Z Boss 20 crankbait. I caught about 40 bass in the 2.5-pound range. I think the cloud cover made them stay on the bream beds a little longer. In the afternoon, I fished deep brush piles with a Zoom Ol’ Monster plum-apple worm. At 3 p.m., I caught one that gave me about a half-pound cull up. That made a difference.”

Landing in the fourth spot, Jason Robertson of Pineville, La. found five solid keepers for 18.16 pounds with a 5.40-pounder topping the sack. He took $700 back to the Bayou State. Justin S. Sowell from Silsbee also landed a limit for 17.87 pounds to earn $500 for fifth place among the boaters.

In the Co-Angler Division, Mark C. Lanham of Lufkin waited almost to the last minute to land his 3-bass division limit going 13.04 pounds. He capped his catch with a 5.20-pound kicker. That gave him a 4.35-pound average and put $1,000 in his pocket. 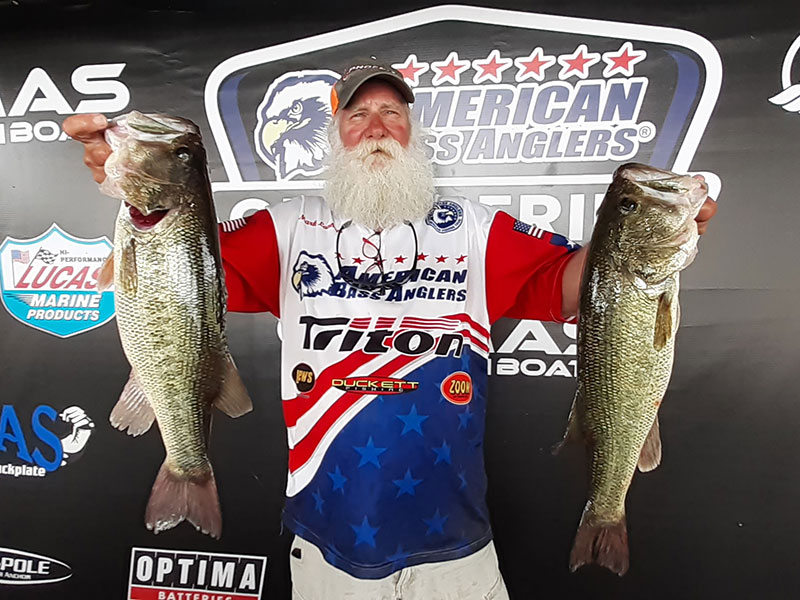 “I was extremely lucky,” Lanham stated. “In the last 20 minutes, I culled everything I had in the boat. I maybe had seven pounds when I started culling. I was throwing a small Texas-rigged trick worm in about 10 to 12 feet of water. We just happened to land on the right spot.”

Taking the second spot for the co-anglers, Lee O. McDowell from Kemp caught a 3-bass limit for 10.18 pounds. He anchored his bag with a 5.45-pounder, the second largest bass caught by any co-angler. McDowell earned $550 for the effort.

“I was flipping with a weightless Senko,” McDowell commented. “I also fished a shaky head in about 15 feet of water. I caught some on a swim jig. I had a limit by 8:04 a.m. and caught seven keepers, so I did some culling.”

James D. Stephens of Carthage found three big keepers for 9.98 pounds. One of them weighed 3.95 pounds. For third place, Stephens added $350 to his bank account.

“We went north up the river and fished in the bushes all day,” Stephens revealed. “I caught most of my fish on a frog. After the rain stopped, I started flipping bushes and caught my biggest fish. I caught four keepers and made a good cull when I caught the big one. We saw two really good fish by some bream beds, but they wouldn’t hit anything.”

Pam S. Holwerda from Killeen scored one for the ladies. She placed fourth among the co-anglers with three bass at 9.94 pounds, but one of them weighed 5.49 pounds. That gave her the division lunker title. She earned $275 for fourth place and a $165 bonus for the big bass, giving her $440 in winnings.

Rounding out the top five co-anglers, Matt J. McIntosh from Stonewall, La. brought in three keepers. His limit weighed 9.52 pounds, enough for him to go home with an extra $200.

The division returns to these same waters on June 4, 2022, for the third event of the regular season. Again, the anglers will run out of Cassels-Boykin Landing, located on State Park Road in Zavalla. To register for this event, CLICK HERE.