LAGRANGE, Ga. – Team Roth, Dillon, and Rickey, put in a solid final performance to score a knockout wire-to-wire victory in the 31st annual Military Team Bass Tournament, presented by American Bass Anglers and Caymas Boats and held May 4-6, 2022, at West Point Lake on the Georgia-Alabama line. 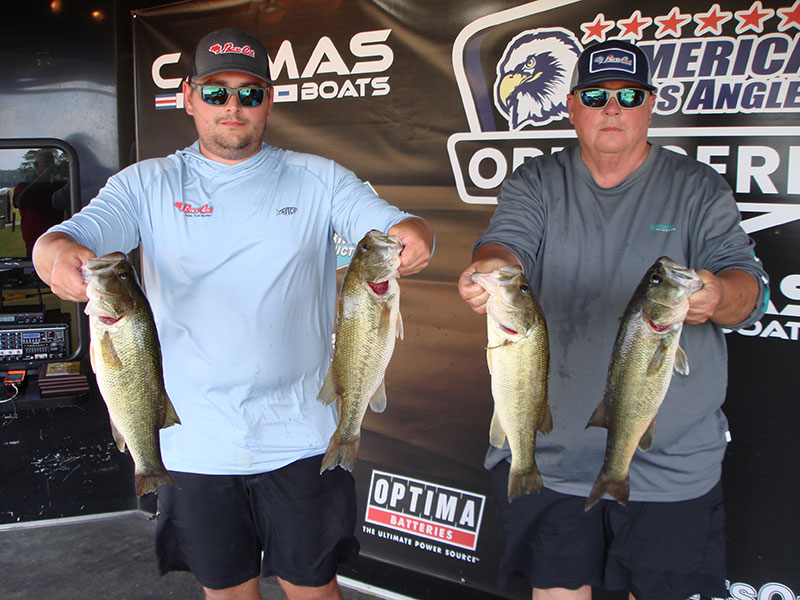 With Dillon representing the Air Force and Rickey the Marine Corps, the Roths pulled in a perfect three daily tournament limits of five bass each to win with 34.79 pounds. The Roths beat their nearest competition by nearly 6.5 pounds and collected $2,000 as the new military champions.

Team Roth took the early lead on Day 1 with 11.88 pounds, anchored by a 3.14-pound kicker. On Day 2, they added 10.29 pounds to lengthen their lead to more than two pounds with a 22.17-pound two-day total. Saving the best for last, they landed their biggest sack at 12.62 pounds, one of the biggest daily bags caught during the tournament, to seal the victory on the final day.

“We caught most of our fish on a shaky head, jerkbait and a brush hog all three days,” Dillon said. “We fished all over the lake. We lost a good fish each day.”

Taking second place among the 70 military teams and representing the Air Force, Craig Fagan and Torrey Aiken finished with a perfect 15 bass for 28.38 pounds. They collected $950. 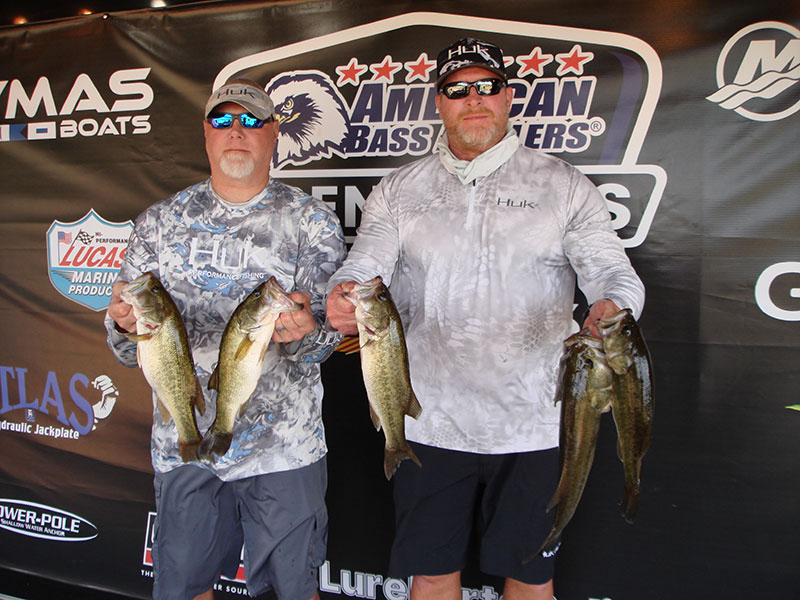 Fagan and Aiken sat in 25th place on Day 1 with 7.41 pounds. They caught 9.93 pounds the second day to vault 17 levels to eighth place with 17.34 pounds. After increasing their weight each day, they tallied their best effort on the final day to bring 11.04 pounds to the scales. This pushed them up another six notches.

“We stayed all week in the back of Stroud Creek fishing around bream beds with a wacky-rigged Senko,” Aiken explained. “On the final day, we caught two key fish on a frog. We lost a lot of fish. We probably would have won if we had put everything we hooked into the boat.” 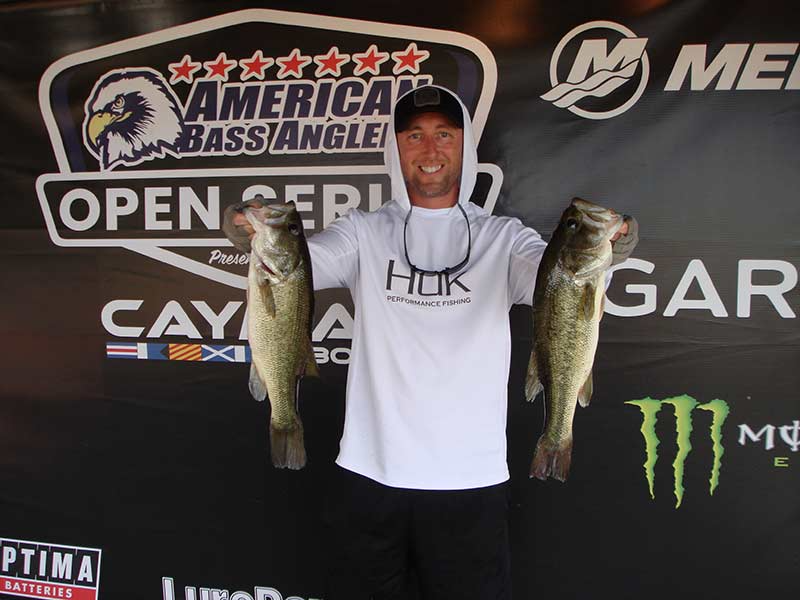 Hovering near the top each day, Spencer occupied third place on Day 1 with 11.02 pounds, less than a pound out of first. He anchored that sack with a 2.88-pounder. On the second day, he held second place with 10 bass going 20.16 pounds after catching a 9.14-pound bag. On the last day, Spencer caught four bass weighing 7.55 pounds to drop a rung. One more good keeper would have at least put him in second place.

“I had never been to this lake before,” Spencer commented. “I figured I would focus on one end of the lake. I went up the Chattahoochee River and stayed there all week. I also focused on catching largemouth. I caught all my fish in the back of pockets guarding fry and chasing shad. I caught them on wacky-rigged stickbait. I also caught a lot of key fish on a frog. I made the cardinal sin of fishing and let a fish get around my prop. I broke off a 3-pounder and it cost me.”

Overcoming service rivalries, Bart Brimhall of the Army and Mark Sullivan, who retired from the Navy, did a joint operation to finish in fourth place with 15 bass weighing 27.65. The team collected $750. 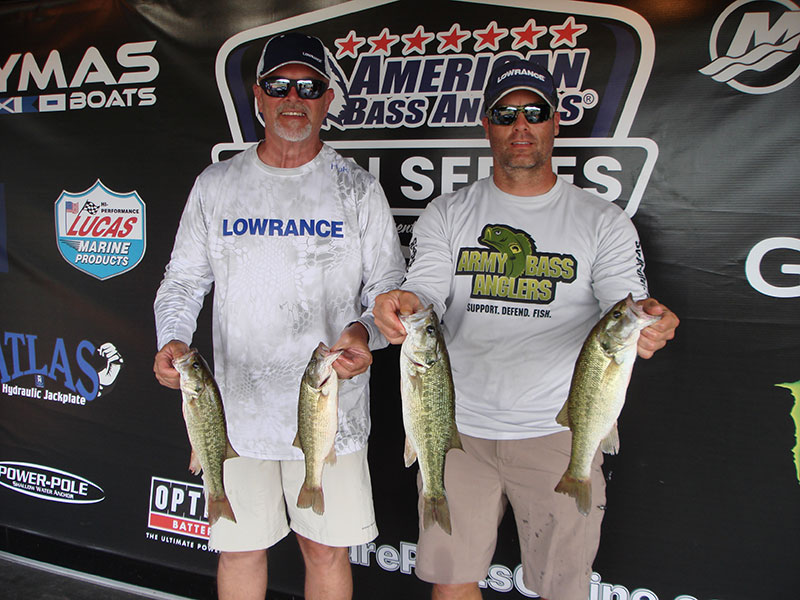 Brimhall and Sullivan held 17th place on Day 1 with 8.14 pounds. They found enough keepers for to leap of nine places with a 9.09-pound bag on Day 2 to give them ninth place with 17.23 pounds. They caught their best sack on the final day at 10.42 pounds to move up another five levels. Catching a 3.62-pounder helped that effort.

“We caught a lot of fish on crankbaits off main points and some on topwaters,” Sullivan revealed. “We caught a couple on spinnerbaits, but there was this one fish that got off the first day. It got off again on the second day. We went in to get it on the final day and saw another competitor in that spot. I asked if he saw a big fish by a stump. He answered that it broke him off on a spinnerbait. We fished the lower end of the lake.”

Comer Carter and Doug McGroarty, both Air Force men, finished in fifth place with three solid limits to give them 27.62 pounds. They earned $625 as a team. Comer collected a $500 bonus as the top finishing angler using Garmin products.

“We just went fishing and didn’t burn $10 worth of gas in three days,” Carter said. “We caught fish on a lot of different baits including crankbaits, shaky heads and Pop-Rs. You name it and we threw it. We just got lucky.”

Jason Ray and Robert Hughes placed 10th with 14 bass totaling 25.31 pounds. Ray landed the biggest bass on the first day at 4.08 pounds and collected a $660 bonus. On the first day, they held fourth place with 10.45 pounds.

“I was fishing a Whopper Plopper topwater bait about 8 a.m. on the first day when the big one exploded on it,” Ray advised. “Every big keeper fish we caught this week came on a Whopper Plopper.”

Bryan McNeal and Jared Albright caught the largest bass on Day 2 and led the lunker competition with a 5.31-pounder. They finished in 20th place with 12 bass weighing 21.65 pounds. They also collected $660 for catching the biggest bass on the second day.

They caught the biggest bass by fishing a Spook topwater bait near two laydowns in about eight feet of water. The fish hit the lure at about 7:45 a.m. on the second day. The team already had a limit and culled up about four pounds. The bass jumped out of the water to get that bait and leaped out of the water about five more times, they said.

Fishing with Rob Nowlin, Ron Figueroa caught the largest bass on the third day, which also took the lunker title for the entire tournament. For the 5.60-pound bucketmouth, Figueroa pocketed $660. The team finished 13th with 15 bass tallying 24.49 pounds.

“We were fishing down the lake when I caught the big bass,” Figueroa recalled. “We were fishing up the lake and it started raining. All the wind went away and we needed wind so we made a move down the lake to a spot we had fished on the first day. I was throwing a ChatterBait in the back of pockets. It jumped out of the water. These fish on this lake are the jumpingest fish I’ve ever seen.”

Hosted by the city of LaGrange, Ga., the event ran out of the Pyne Road Mega Ramp. West Point Lake extends 35 miles along the Chattahoochee River spanning the border with Georgia and Alabama. The lake offers anglers 525 shoreline miles to fish.