The tournament launched at Goose Pond Ramp in Scottsboro, Ala. After an hour delay for the weather on the first day due to excessive winds making boating on the massive 75-mile-long, 69,100-acre Tennessee River impoundment dangerous, tournament officials pushed back the ending time that day by one hour.

Rockhill finished with a perfect 2-day limit of 10 bass weighing 40.51 pounds for the wire-to-wire victory. That gave him a 4.05-pound average. Catching a 6.01-pound bucketmouth on the first day helped his average. Rockhill went home with a check for $18,000.

On the first day, the angler from Santa Rosa Beach, Fla. landed a 5-bass daily tournament limit to jump ahead with 22.83 pounds, the second largest single-day bag in the tournament. That gave him more than 2.5 pounds of separation from his nearest competitor heading into the final day.

“With the wind the way it was, it was a little dicey getting to the fishing places and trying to get back, but we made it work out,” Rockhill commented about the first day of competition. “I have never fished in wind like that before. I pitched into grass in six to eight feet of water. I kept my flipping stick in my hand all day.”

On Day 2, Rockhill went big in his baits. He brought in another 5-bass daily limit for 17.68 pounds. That put him more than three pounds ahead of second place and in the big money.

“I caught all my fish punching dollar grass,” the new champion stated. “I found one little stretch of grass upriver that was probably about 200 yards long. I just went back and forth on it for two days. I knew the area held fish. I saw some other guys fishing that area, but they were catching small ones. To get those big bites, I had to pitch it 15 to 20 feet back in the grass. On the first day, I punched with a 1.5-ounce creature bait. On the second day, the wind blew in a lot of eel grass, so I went up to a 2-ounce weight.”

Landing in second for the 130 anglers fishing the event, Robert “Matt” M. Baty from Bainbridge, Ga. caught 10 keepers tallying 37.16 pounds. Baty took a check for $6,000 back to Georgia. 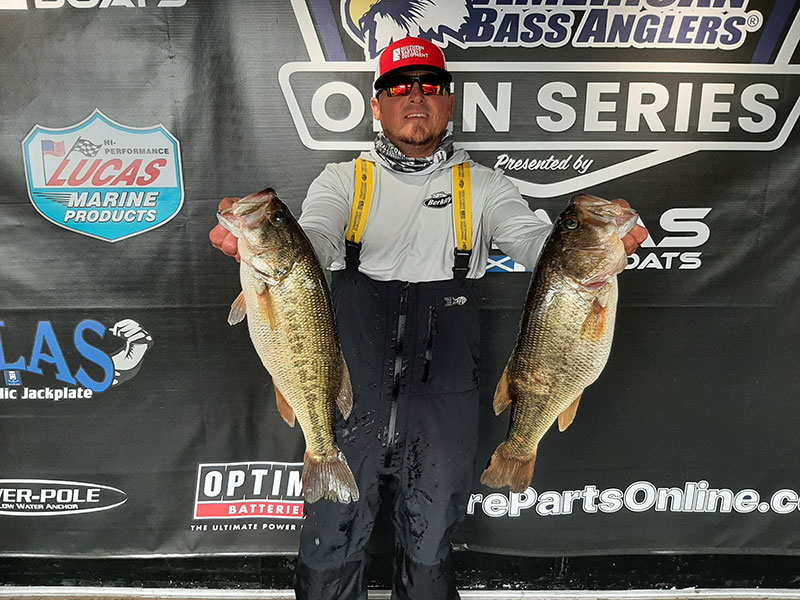 On the first day, Baty held fourth place with five bass going 19.12 pounds. This included his largest bass of the tournament, a 5.36-pounder. Mostly, he fished main-lake ledges with a deep running crankbait.

“This lake fishes a whole lot like my home lake, Lake Seminole,” Baty observed. “It has deep offshore grass and shell beds. I knew the wind on the first day was going to get stronger. I was hoping to land on some fish and luckily I landed on the right spot. On the first day, I caught the five fish that I weighed during the first hour. I fished main-lake ledges with a Berkley Dredger 25.5. I was fishing shell beds in about 10 to 12 feet of water and grinding that crankbait into the shell beds. I like that crankbait because it grinds into the shell bed really well. I was fishing it fast, probably faster than I’ve ever fished it.”

Baty brought in 18.04 pounds on his second day. That bumped him up two places to finish second.

“When I came up to Guntersville, I thought I would be fishing shallow, but I started scanning offshore ledges and finding a few fish,” he commented. “I caught all my fish off one shell bed down south. On the second day, I caught two really quickly on the crankbait. They were schooling right by my motor. Then they quit. Later, I caught them on a flutter spoon and a topwater bait. I caught about 20 fish on the final day.” 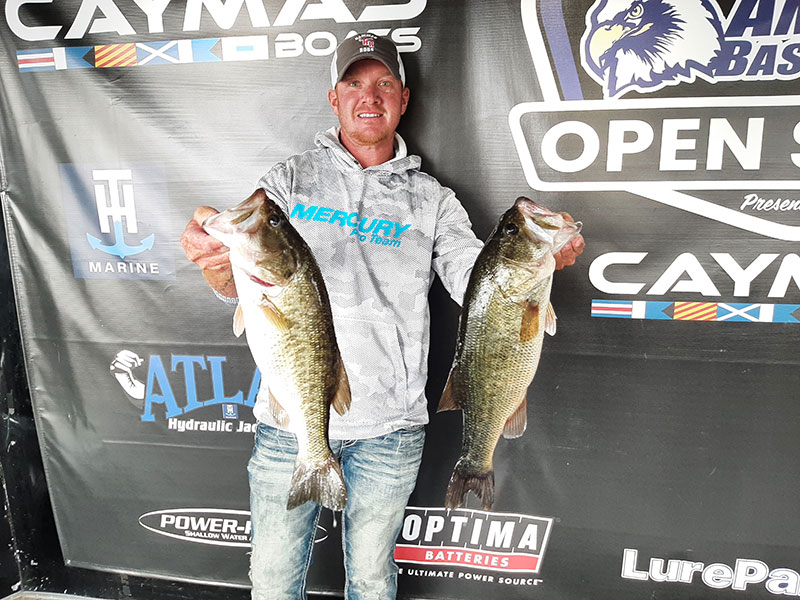 “I just stayed offshore both days,” Ogle revealed. “It was a grind. I lost two big ones trying to net them. That’s fishing.”

Finishing in fourth place, Jett B. Loach from Chickamauga, Ga. finished with a perfect 10 bass tournament limit for 36.46 pounds. On the first day of competition, he brought in the biggest bass of the event at 8.15 pounds. For fourth place, Loach earned $3,550 plus a $1,000 lunker bonus for a total of $4,550 in winnings. 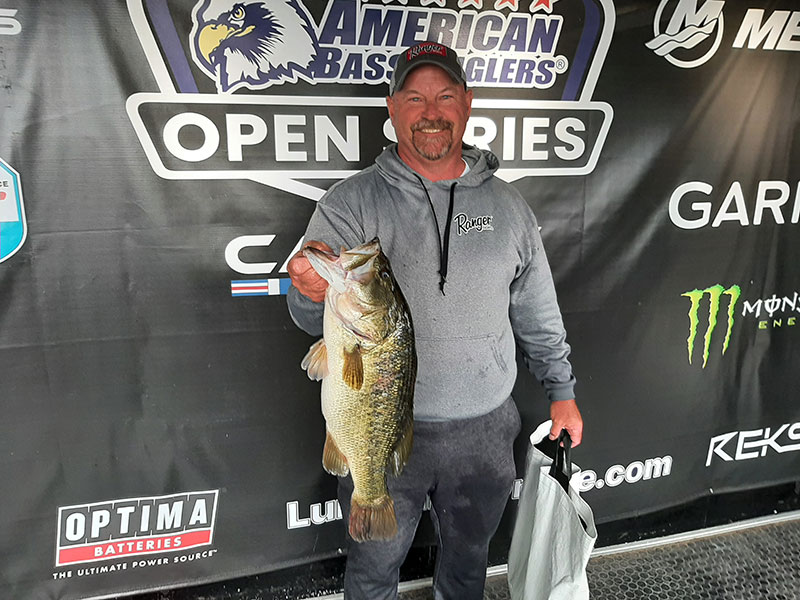 Aided by that giant bass, Loach sat in second place on Day 1 with 20.25 pounds, the fifth biggest one-day bag caught in the tournament. He fished downriver on Day 1 and struggled to get back with the howling wind. He caught 16.21 pounds, dropping two spots to fourth on Day 2.

“I threw a Senko wacky style the whole time both days,” Loach advised. “I found some grass and beat it to death for two days. On the first day, I ran way down the river and caught three small fish early. The wind got up and I tried to make my way back and tore the rub rail off my boat. I took about six baths on the way back. I didn’t get another bite until about 2 p.m. when the wind chilled out so I could run upriver. I pulled in a spot and caught a small one and one about three pounds. The big fish was my fifth fish on my first day. I caught one almost six pounds as my fifth fish on the second day. I also caught two catfish and thought the biggest bass was another catfish until I got it to the boat.”

Don C. Bobo made one of the longest rides to fish the tournament, coming all the way down from Somerset, Ohio. He also made the biggest leap of the tournament, jumping 59 levels to finish fifth with nine bass and 34.71 pounds. Bobo sat in 64th place on Day 1 with four bass for 9.97 pounds. On the second day, he caught the largest single-day sack at 24.74 pounds, more than many anglers landed in two days. He took home $2,850. 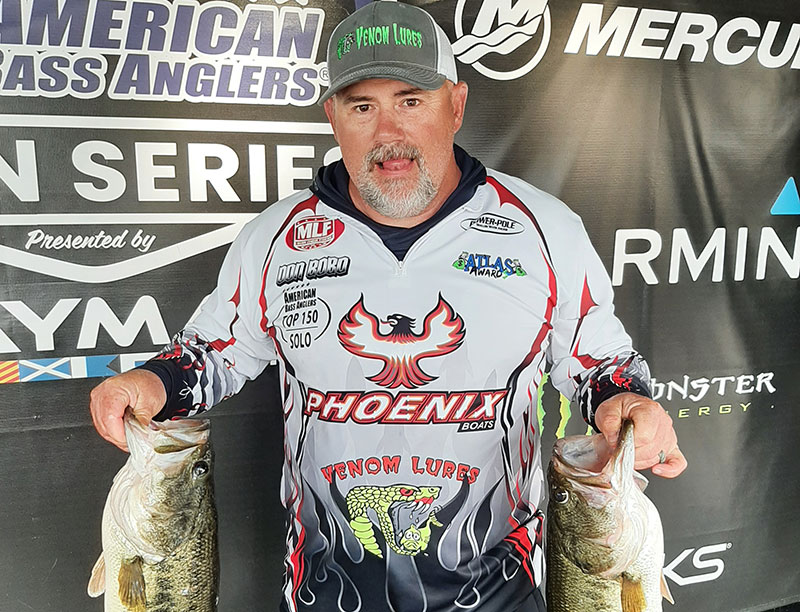 “The first day was rough with the wind,” Bobo said. “On the first day, the fish I found earlier were next to impossible to catch in the wind. On the second day, I caught them on a trick worm in about 10 feet of water around the grass.”

Kenny M. Carroll from Opelika, Ala. sat in third place on Day 1 with five keepers weighing 19.17 pounds. On the final day, he caught 14.74 pounds. That dropped him to sixth place with 10 bass going 33.91 pounds.

“My practice didn’t go very well,” Carroll commented. “I found some bream beds late in practice and caught some bass off the beds. I was using a Senko, an Ultravibe Speed Worm and a jig.”

Danny C. Shell from Albertville, Ala. sat in fifth place after one day with five bass totaling 16.69 pounds. He brought in 12.98 pounds on the second day to finish in 21st place with 10 bass weighing 29.67 pounds. He caught fish on a Carolina rig in eight to 10 feet of water.

“The first day was a pretty rough,” Shell lamented. “That Caymas boat did an awesome job in that rough water on the lake. It’s a great boat.”

Anglers pay $600 to enter each tournament and everyone fishes alone both days. No more than 150 anglers can participate in any divisional event. If 150 anglers participate, the winner of that event will take home a guaranteed $20,000. If fewer competitors register, the top 20 percent of the field will each earn a portion of the prize money, based upon the number of entries.

The Southeast Division wraps up its regular season on June 17-18 at Lake Chickamauga, Tenn. The tournament launches out of Chester Frost Park, located at 2277 Gold Point Circle North in Hixson, Tenn.