EUFAULA, Ala. – Hovering near the lead all week, Rodger Beaver, Jr. finally broke into first place on the day it mattered most to emerge as the Boater Division victor during the 2022 Ray Scott Championship, Presented by Caymas Boats, held at Lake Eufaula, Ala. on April 6-9.

The angler from Dawson, Ga., finished with a perfect four straight 5-bass daily tournament limits to put 76.32 pounds on the board for a 3.81-pound average. His largest fish caught on the first day, weighed 5.78 pounds. 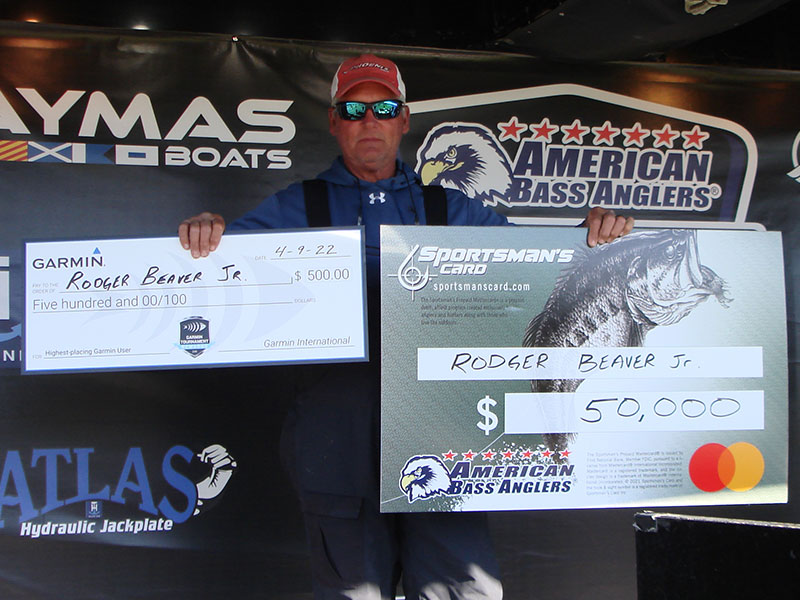 “Every day, I basically did the same thing,” the new champion commented. “I fished offshore structures, like trees, rock piles, and stump fields. I caught everything from about six to 20 feet deep.”

Beaver used some baits made in the hosting town of Eufaula, Ala. He caught most of his fish a 1.5-ounce Strikezone Ledge Buster spinnerbait (www.strikezonelure.com). He tipped the spinnerbait with two different sizes of Big Bite Baits (bigbitebaits.com) Pro Swimmer trailers. He also caught a few fish on a 5-inch Big Bite Baits Fighting Frog.

The 133 competitors in the Boater Division only broke 20 pounds in a day four times. Beaver caught two of them. He held second place on Day 1 with 18.94 pounds, including that 5.78-pound kicker. He dropped to third on the second day with a 15.02-pound sack that gave him 33.96 pounds.

“I fished up the lake on the first day before the mud got down the lake, but fished down the lake most of the time,” Beaver revealed. “The mud blew out my spot on the second day.”

As the Boater Division champion, Beaver pocketed $50,000 in cash plus a new fully-equipped Caymas CX 20 20-foot boat powered by a 200-horsepower Mercury outboard on a Caymas trailer. The package comes with two Garmin electronics units, a Garmin trolling motor, Optima batteries and other items. The boat package retails for about $65,000. Beaver also earned a $500 bonus because he had Garmin electronics in his boat for a total of $115,000 in winnings and annual bragging rights as the champion of the 7th annual Ray Scott Championship.

After leading for two days, Shane Powell from nearby Dothan, Ala. finished second with 17 bass going 61.94 pounds. After landing three straight 5-bass daily limits, one of them topping 20 pounds, Powell struggled on the final day. On Day 4, he brought in two keepers for 4.87 pounds. He collected $7,000 for second place.

On the first day of the competition, Powell held third place with 18.89 pounds, including a 5.77-pound kicker. On the second day, he landed 20.11 pounds, the four largest single-day sack of the tournament, to take the lead with 39 pounds. He maintained his lead on Day 3 with an 18.07-pound catch that gave him 57.07 pounds. He caught most of his fish working a spinnerbait around deep brush piles.

Phenix City, Ala. angler Ryan N. Ingram improved his standing three out of four days and maintained on the other day. One of only three boaters to bring in four straight limits, Ingram finished third with 20 bass at 52.88 pounds. For that, he become $6,000 richer. The top three anglers all fished in the same general area with the same type of baits.

Chandler A. Ray from Bainbridge, Ga. caught the largest single-day sack in the tournament to take the early lead with 22.04 pounds. He anchored that bag with a 6.64-pound largemouth, the biggest fish caught on the first day. Ray slipped to second on Day 2, landing 14.60 pounds to give him 36.64 pounds. On the third day, Ray landed a 12.42-pound bag, but dropped to third place with 49.06 pounds. After catching three straight 5-bass daily limits, Ray blanked on the last day, but still finished fifth. That gave him a check for $3,500.

Samuel R. Rineer from Aberdeen, Md. topped the boaters in the division big bass category. He caught a 7.27-pounder on Day 2 and finished with five bass weighing 18.42 pounds. He picked up $1,000 for the big fish.

In the Co-Angler Division, Damon J. Phillips of Anderson, S.C. made a huge leap from near the bottom to winning the championship title. He led on the third and crucial final day. He also caught the most keeper bass of any co-angler to finish with nine fish and the only total catch to break 20 pounds. He ended with 20.90 pounds.

“I thank all my boaters for putting me around fish and giving me a chance to catch them,” Phillips remarked. “For a co-angler, anyone not around fish is in for a long day. I’ve fished ABA events for several years and all my boaters have been outstanding for letting me catch fish.” 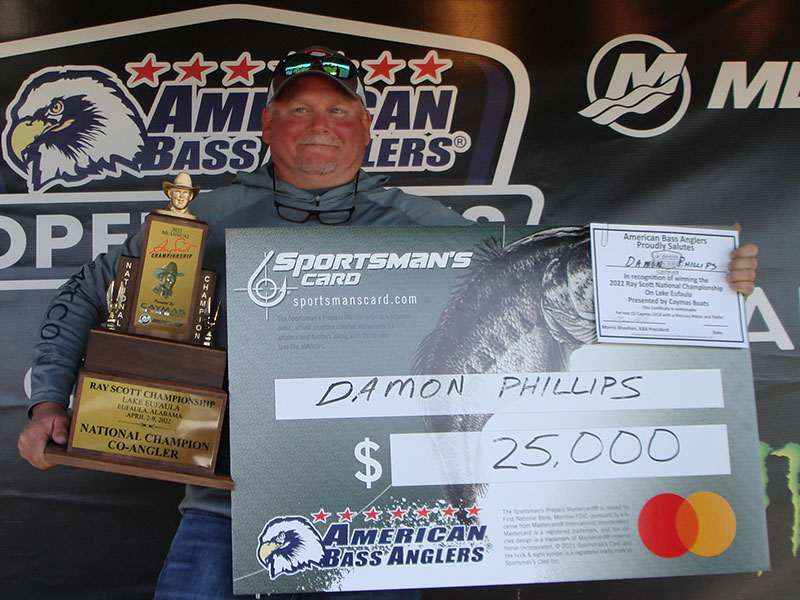 On the first day, Phillips sat in 51st place with a single bass weighing 1.47 pounds. On Day 2, he caught a 3-bass daily division limit weighing 7.28 pounds to rocket into fifth place with 8.75 pounds. He brought in another limit of keepers on the third day for 6.55 pounds. That gave Phillips the lead with 15.30 pounds heading into the final stretch.

He ended the tournament with two bass weighing 5.60 pounds. That gave him enough total weight to beat his closest competitor by nearly 4.5 pounds.

“On the final day, we went down the lake and struggled,” Phillips said. “The wind was really bad, worse than any other day on the lake. We went to the bank and I caught two good fish. I fulfilled the top item on my bucket list and now I have a new boat, plus $25,000 in cash.”

As the new Co-Angler Division champion, Phillips pocketed $25,000 in cash. He also took home the title to a new fully-rigged Caymas CX 18 SS 18-foot boat equipped with a 150-horsepower Mercury outboard on a Caymas trailer. The package comes with Garmin electronics, a MotorGuide trolling motor, Optima batteries and other items. The boat package retails for about $55,000, giving Phillips a grand total of $80,000.

Taking second among the co-anglers, Kyle A. Jones of Leesburg, Fla. also made big rises. Blanking on the first day, Jones sat at the bottom of the pack. He caught two keepers weighing 2.14 pounds on the second day, nudging him up two spots to 55th place.

“On the first day, I drew a local boater,” Jones said. “We started fishing some riprap down the lake. I only had one bite all day and missed it. It was probably a 6- to 7-pounder. On the second day, we went flipping the shallows, but didn’t do very well. By 1 p.m., we fished some riprap near the ramp. I caught two small spotted bass.”

Jones made major upward progress on Day 3 by landing a limit weighing 8.42 pounds. That put him in 11th place with 10.56 pounds. Jones landed another limit on the final day. His 5.87-pound sack allowed him to finish in second place for the co-anglers with 16.43 pounds and a check for $3,500 in his pocket.

“On the third day, the same thing happened as the second day,” Jones remembered. “With about 90 minutes left, we started fishing near the ramp and I filled my limit in about 20 minutes. I caught all my fish on a 1.5 and a 2.5 square-billed crankbait. On the final day, I caught all my fish in that same area on the same crankbaits.”

“I want to thank all my boaters for giving me the opportunity to catch some fish,” Casanova said. “I fished with Rodger Beaver on the final day. He’s a phenomenal fisherman who is really dialed in on his spots. It’s tough to fish behind him, but I learned a lot.”

On Day 1, Casanova held seventh place with three bass going 5.54 pounds. He moved up five spots to second on Day 2 with a 7.46-pound limit for 13 pounds, less than an ounce behind the leader. On the third day, Casanova landed one keeper weighing 1.46 pounds, but remained in second place with 14.46 pounds. On the last day, he caught a single 1.01-pound bass.

On the first day, Williams landed his 3-bass division daily limit for 8.53 pounds, He anchored that sack with a 5.22-pound kicker, the largest bass caught by any co-angler on Day 1. On the second day, Williams caught one bass weighing 1.58 pounds, dropping him to fourth place with four bass going 10.11 pounds. On the third day, he found two keepers for 2.07 pounds, putting him in fifth place with six bass going 12.18 pounds. He landed one 1.86-pounder on the last day.

Rounding out the top five co-anglers, Maricko R. Roberts from Newton, Miss. went up and down the ladder during the week. Roberts brought in seven keepers for 13.60 pounds for a payout of $1,750. Roberts held 34th place on Day 1 with one bass weighing 2.26 pounds, but blanked on Day 2, sending the angler down to 52nd levels. Catching a 3-bass limit weighing seven pounds on Day 3, Roberts advanced to 15th place with 9.26 pounds. Roberts landed another limit on the final day for 4.34 pounds.

Curtis Hillman from the hosting town of Eufaula, Ala, led on Day 2 with three bass going 13.94 pounds, the largest single-day bag for any co-angler and the only co-angler to hit double digits in one day. However, he zeroed all three other days, putting him in eighth place. However, he did catch the biggest bass of the tournament at 7.94 pounds. He pocketed $1,000 for eighth place and a $750 bonus for the big bass.

The tournament ran out of Lakepoint Resort State Park near the town of Eufaula, Ala. The 8th annual Ray Scott Championship will be held in April 2023 on the Red River in Shreveport, La.