Why do bass attack red objects in the winter? Many theories evolved. For one, crawfish emerge from the mud and begin crawling around in late winter or early spring. Bass can’t resist slurping a crawfish scurrying over the bottom. For this reason, tube baits and jigs with craw trailers work exceptionally well in late winter and early spring.

Others theorize that the red color looks like blood in the water. A bleeding prey means an injured prey that’s easier to catch.

Perhaps bass see red better in the water. During the winter and early spring, many areas receive copious amounts of rainfall, which could muddy the waters. Red shows up well in murky waters. It gives off good flash and a strong silhouette.

“In the winter, I fish a lot of red rattle baits and crankbaits,” advised Tony Tidwell of Horton, Ala., who fishes several American Bass Anglers tournament circuits and other events that occur on his home waters of Lake Guntersville in northeast Alabama. “Red stands out and gives a good flash when it comes through the water. Someone could catch bass on a red bait at Guntersville at any time, but I don’t catch as many bass on red baits at other times of the year as I do in the winter. When the water temperature is in the mid to lower 40s, that’s when I catch bass really well on red baits on Guntersville.” 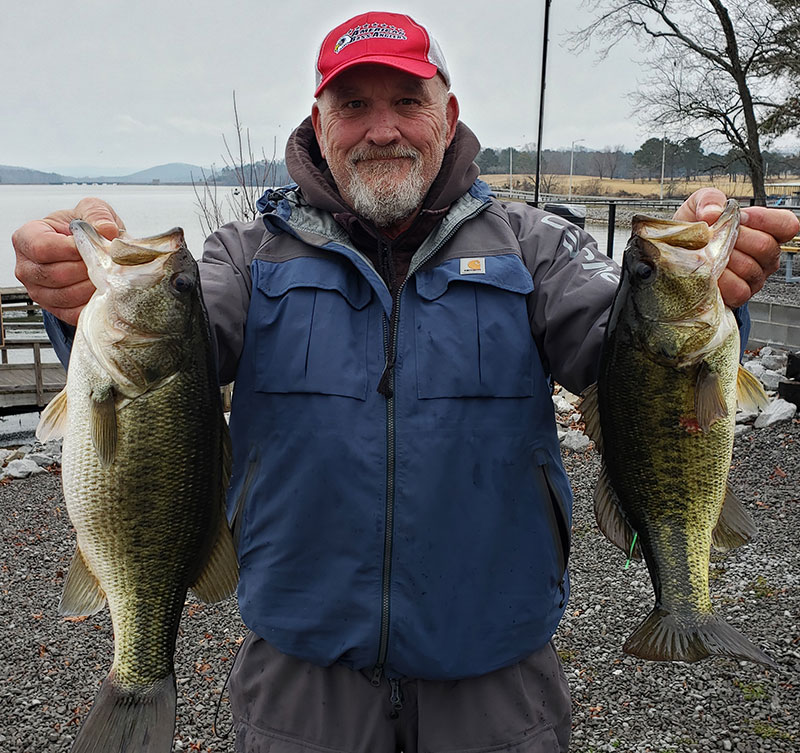 Normally considered a northern species, yellow perch range from the Canadian Arctic to South Carolina, but this member of the walleye family has been introduced in the Tennessee, Chattahoochee and Apalachicola River systems in Alabama, Georgia and northern Florida. They grow to about a foot long and can weigh more than two pounds. They sport a tinge of red around their gills and fins. Yellow perch usually begin spawning in February. Bass hunt them in shallow grassy flats.

“Bass usually get right at the top of the eelgrass,” Tony advised. “Eelgrass lays straighter along the bottom than other aquatic grasses. The top might be three to four feet below the surface with another two to three feet of grass to the bottom. Bass hide in that top layer of the eelgrass with just enough of their heads sticking out to see so they can ambush prey.”

Tidwell uses a 7-foot medium-heavy to heavy rod and a reel loaded with 15-pound-test 100-percent fluorocarbon P-Line when fishing rattle baits over the grass. In the winter, he makes long casts and works a rattle bait slowly just over the grass tops.

“A Cotton Cordell Super Spot sinks a little slower than other rattle baits in its class,” Tony mentioned. “The colder the water, the slower I want a bait to sink. I do a slow, steady crank in the winter, as slow as I can retrieve it. I don’t jerk it, but I’ll give it a little twitch every now and then to give it a little flash. I want to work it just fast enough so it says right above the eelgrass. I don’t let it fall into the grass. When bass hit a red bait, they are very ferocious. It’s not a subtle bite.”

Anglers could try this strategy when fishing the Alabama North Division 1 of the ABA Open Series, Presented by Caymas Boats, season opener. Set for Jan. 29, 2022, on Lake Guntersville, the tournament launches out of Goose Pond Ramp in Scottsboro, Ala. To register for this event, Click Here to Register.

The best price online for a Cotton Cordell Rayburn Red is $3.40 from Walmart online (See Link)