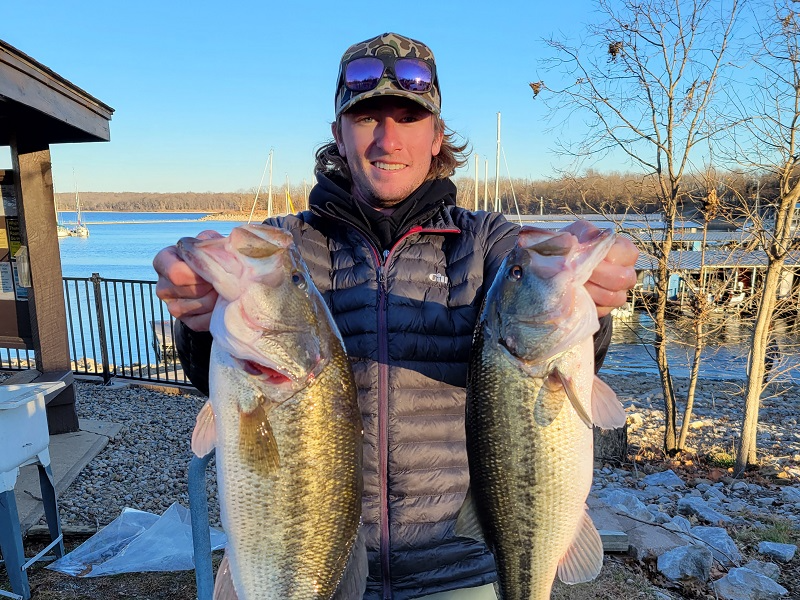 It was a crisp, cool take-off with air temperature in low 30’s, warming into the low 60’s by weigh-in time of 3:30. Water temperature was 47°-50°. Jigs and crankbaits were the baits of choice for most of the anglers. Eight of the 28 anglers brought in their 5-fish limit. View full results with pictures at www.centralmidwestbass.com.

Anglers are fishing for cash, prizes and points which will qualify them to fish the Stockton Lake 2-day Championship September 24-25, 2022. Big Bass of the year will be awarded a $500 prize from Heritage Tractor; Big Stringer of the year will win $500 cash donated by Jag’s Snacks. Over $4000 worth of prizes will be given away at the 2-day event. Anglers must qualify for the 2-day by fishing four (4) 1-day events. D126 next tournament is scheduled for February 19, 2022 launching out of Old State Park.

This was an American Bass Anglers tournament. ABA is a national tournament circuit with divisions in more than 30 states. ABA members can fish in any of these tournaments. Division 126 is one of several Missouri divisions and holds tournaments almost every month. It is run in a draw format and open to boaters and non-boaters from age 14. Membership is $35/year; entry fee is $70/angler. Most divisions have a Big Bass option pot. Schedules with results for several area divisions can be found at www.centralmidwestbass.com.