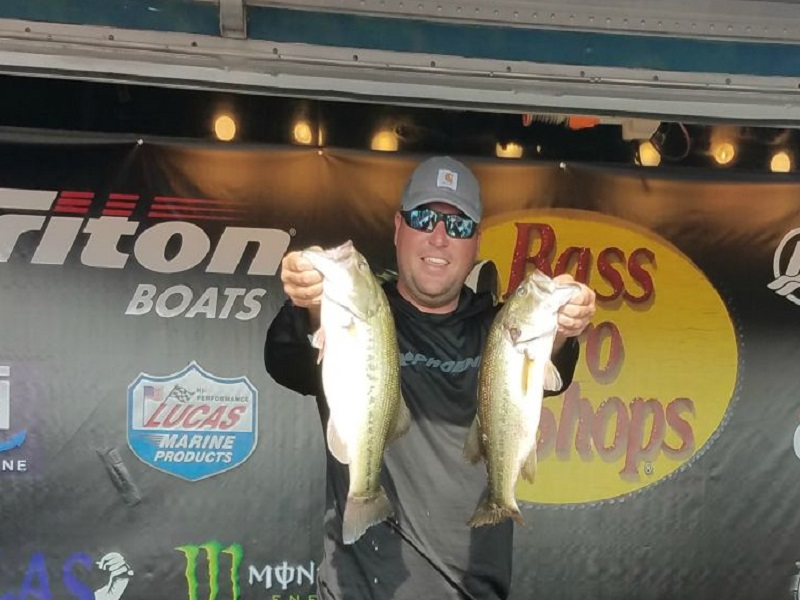 ATHENS, Al. – George “Tyler” Trent of Nathalie, VA won the American Bass Anglers American Fishing Tour National Championship held March 20th through the 22nd on Kerr Lake, VA.  Running out of Oconeechee State Park, Tyler’s three-day total of 15 fish topped the field of 237 anglers weighing in at 39.21 lbs.  Throughout the season these anglers compete in a local division to earn their place at the National Championship.  Not only did Tyler qualify, be he won Angler of the Year in his division which increased his chances at winning a boat by two.  The winner of the National Championship and the highest finishing Angler of the Year in this tournament each win a new Triton 21TRX with a Mercury Outboard and GARMIN electronics.

Tyler is now the proud owner of a 2021 Triton 21TRX equipped with a Mercury 4 stroke, GARMIN electronics, TH Marine accessories, and a check for $4000.00.  Tyler also had the right electronics on his boat during the tournament, giving him another $500.00 bonus from GARMIN.

“It was quite a week” stated Tyler.  “I was able to practice for 2 days and figure out where the fish had staged.  Saturday and Monday.  Both days of practice were good. There was a span of two weeks where the fish didn’t move at all prior to the off limits so I felt good about it.  I only hooked a couple to save them for the tournament, but I was expecting to catch 15-20 lbs. each day.” Mentioned Tyler.  That just wasn’t the case.  The weather turned and it turned cooler and pushed the fish to swing toward the fall pattern and we all know it can get tough when that happens.  “I was fishing deep and shallow by running all over the place throughout the day.  Anywhere from 80 to 100 places each day, I stayed on the move.  The two primary baits I used on my deeper fish were a jig and Shakey head, shallow bites were all on a whopper plopper.  I had a few key places out deep that I was able to catch a limit each day, then covered a bunch of water to cull up.  I felt confident going into the tournament with the practice I had, and I thought it was going to be wide open.  It got tougher during the tournament.”  Stated Tyler.

Leading up to this event, as usual, mother nature threw the anglers a curve ball with the first cooler temperatures of the year.  Mornings were in the upper 40s with mid-day highs in the upper 70s to low 80s, which made the fish begin their fall migration.  Anyone that fishes this time of year knows how difficult the fish can be to pattern.

Finishing in second place, Brandon Gray of Bullock, NC also caught his limit on all three days of competition, for a total weight of 35.54-lbs.

“For me practice was good.  I found some fish in Nutbush, so I had to make a run all 3 days of the tournament. everything was 24-32 ft deep, and I had a good feeling about the tournament.  The weather caused those fish to move so I moved up a little shallower to areas just above that depth range and located them again in the 13-19ft range.  All the fish I caught came on a jig and on a 1 oz spinnerbait.  I was on the move a lot too, just like Tyler.  I was hitting 40-50 stops a day.  I would pull up, make 5 or 6 casts and if I didn’t get a bite, I was on to the next one.  The lake has been in a funk for the last 2 months.  It hasn’t cooled down enough yet to really put the fish in a pile and turn on like it should.  You can be in one pocket on one end and the lake had turned over and the next pocket you go into the lake was fine.  It’s been like this for 6 weeks.  A 12 lb bag has been heavy enough to do well and I really wish the rest of the field could have seen what this lake is capable of.  There are a lot of fish there, and good ones too.  Had it been the right timing this tournament could have been off the chain.” Stated Brandon.  “I lost a couple good fish.  The one that really hurt my feelings was on day 1 of the tournament.  I saw her and when she came off, I felt like a popped balloon.  Luckily, I did get another good fish on day 2.  The fall pattern we expected is just still not here.” said Brandon.

Tom O’Bryant of Cedar Grove TN finished in third place, with his 3 limits of fish going 29.61 lbs.  Tom is no stranger to this stage.  He took home a win and a new Triton boat in a previous National Championship in 2010.  Starting out with lead with a hefty bag of 14.98 lbs Tom was able to stay in contention all week and keep his eyes on the title.

“This tournament was very interesting.  I only had 4 areas I concentrated on and ended up fishing one of them 90% of the 3 days.  I needed a flat and a ditch, with some cover.  When I say ditch, it was only a difference of a couple feet, and the structure could be anything.  Rocks tractor tires, limbs, etc.  I was close to the launch site too.  I was in Bluestone.  The flat was maybe 5 acres.  It was deeper on the back side, and it had 12 docks.  In the morning I was on the flat casting a spinnerbait or a chatterbait.  When the sun came up, they went to the docks.  A lot of creeks had similarities but most of them were not set up right.  There were enough fish in this one area to win the tournament. I wasn’t able to concentrate on the second day like I had hoped, and I managed to bring in a limit, but the size was not there.  I looked for the rest of the day but didn’t cull up.  On the 3rd day the clouds came in and the fish never went to the docks.  I had to stay on the flat and only got 5 bites.  When the fish had moved up, the only color I could get them to hit was Watermelon-red.  It was critical to have that color.  Vibratail worm was the only thing they would hit.  On the fall…  Those 3 critical factors of sunlight, the Vibratail worm, and staying out on the flat were the patterns that worked for me.” Said Tom.  “I was launching at Bluestone and day 3 brought in some rain before takeoff.  I called Chris (the tournament director) because I needed my raingear which was still in my truck, still had time so I went back and got it, so before the tournament started on day 3 I ran to the launch 2 times!  LOL.”  I only came in with 3 fish on the final day due to the cloud cover but all in all it was a good week.  I had a lot of fun, could have done better, but I am happy with the outcome.

A special thank you goes out to Tina Morgan with Mecklenburg County for hosting a Top-Notch event the entire week we were there.  She had everything set up to give these anglers a wonderful experience, right down to the final awards banquet.  Her support and coordination made the experience such a memorable event!

In some areas, tournaments to compete in the 2022 season have already begun.  The best anglers from across the nation will advance to the AFT National Championship slated for Oct 16th through the 22nd of 2022 on Lake Eufaula, AL launching from Lakepoint Resort and Marina.

For more information on these tournaments and how to qualify for the next one, call ABA at 256-232-0406. Online, see www.americanbassanglers.com