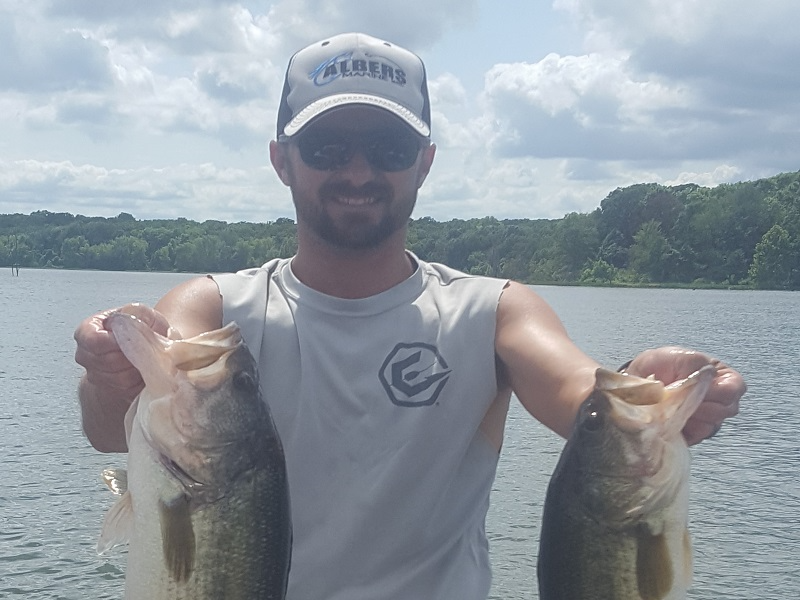 Following a 30 minute lightning show, AFT Division 58 anglers were able to launch from Timberhill Boat Ramp on Big Hill Lake August 21, 2021. Big Hill proved its status as a “trophy fish lake” as 20 bass over 18” were accounted for; 16 of the 20 anglers had a 5-fish limit.

Brett Rinehart’s 6.5 lb bass helped put him in the winner’s circle with a total weight of 23 lbs and $678 cash. Second place went to Kyle Kiister with an 18.36 lb bag and $329 cash; 17.94 lbs earned Terry Knueppel 3rd place and $108 cash. Mack Hale brought in 2nd Big Bass, a 6.0 lb largemouth. Most anglers reported catching fish in the grass, next to stumps or in the deep timber using soft plastic.

The next Big Hill tournament will be September 18, 2021. McConnell Air Force Base personnel have been invited to join the anglers for a day of fishing in this regular 1-day qualifying tournament. It is designated as “Take An Airman Fishing” day. Anyone interested in finding out more information about this special tournament, call Becky at 316 644-1454

The ABA National Championship will be help on Kerr Lake, Virginia October 20-23, 2021.
American Bass Anglers is a National Trail with almost 40 Divisions across the country. It is run in draw format. Boaters and non-boaters from age 14 are encouraged to compete. There are several divisions in this area. You can get more information about them at www.americanbassanglers.com (AFT Trail). Information about the area tournaments can also be found at www.centralmidwestbass.com web-page as well as centralmidwestbass FB page. Membership in ABA is $35/365 days; entry fee is $70. Most divisions have a Big Bass Option Pot. Call Becky with any questions: 316 644-1454.