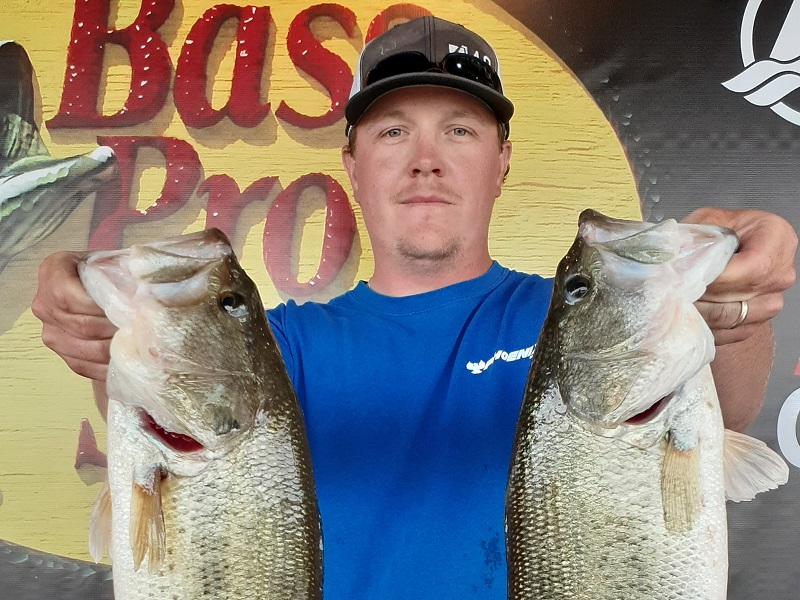 EUFAULA, Okla. -- After scoring a wire-to-wire victory in the March 26-27, 2021, ABA Top 150 Solo Series Southwest Division event on Lake Sam Rayburn, Texas, Zach A. Clark did it again during the divisional finale, held April 30-May 1 at Lake Eufaula, Okla.

In Oklahoma, the Center, Texas, angler landed nine bass in two days to secure the win with 32.31 pounds, nearly eight pounds ahead of his nearest challenger. Until the official tournament practice period began, Clark had never seen the 102,000-acre impoundment on the Canadian River near the town of Eufaula, Okla.

Hard rains dropped five inches of water on the area right before the tournament began. The water level in the massive lake rose five feet in two days and put a serious stain on it. Places and patterns anglers discovered in practice changed drastically by the time the competition began. Anglers had to compete and scout for spots at the same time while determining new patterns.

Clark found some areas in practice, but when conditions changed, he had to look for better water quality. Fortunately, he found a little spot he liked by the time the tournament began. Despite the conditions, Clark jumped out in front early with the biggest single-day sack of the tournament. He caught a five-bass daily tournament limit weighing 17.88 pounds to hold the Day 1 lead by nearly 2.5 pounds. He anchored that sack with a 4.79-pound kicker. Catching four good keepers on the final day, he finished the tournament with a 14.43-pound sack.

“I was flipping bushes up the lake with a V&M J-Bug,” the champion revealed. “Before the water came up, we could see the bushes and they were the best-looking bushes I’ve ever seen in my life. They were healthy and thick at the bottom. I found bass on a spinnerbait earlier in the week when the lake was low, but then, the lake rose so quickly. When flipping, I was only getting big bites, no small bites, so when the water got up in the bushes, it wasn’t so bad for me.”

Catching the only two-day tournament limit of 10 bass in the event, Brett W. Hortman from Natchitoches, La., took the second spot among the 61 competitors fishing the final tournament of the series. His limit weighed 24.38 pounds. Hortman held sixth place after Day 1 with a 12.52-pound bag capped off by a 3.98-pounder. He put another 11.86 pounds on the board after the final day to vault up four spots.

“I had a horrible practice,” Hortman admitted. “With all the water coming up, I just ran around most of the last day before the tournament began looking for clean water. I concentrated on areas with clean water coming into the lake. I fished this lake once before six years ago. The change was real drastic. I wanted to try some areas I found the last time I was here, but they were too deep under water. I had to make some adjustments.”

Cole D. Garrett of Winnfield, La. moved up two spots to finish third with seven bass going 24.01 pounds. On Day 1, he sat in fifth place with four bass and 12.67 pounds. He capped his catch that day with a 5.34-pounder, the second largest bass landed in the tournament. On Day 2, Garrett caught three keepers for 11.34 pounds.

“Since it was muddy, I tried to find the cleanest water I could find,” Garrett explained. “I was flipping bushes with a beaver. I always fished the first set of bushes under the most water where I got my bites. When I missed a good fish while flipping, I threw in a drop shot to catch it. My two biggest fish came that way.”

Dropping one notch, Eli H. Brumnett of Wagoner, Okla. finished fourth with nine bass at 23.44 pounds. Living just an hour away from Lake Eufaula, Brumnett fishes the impoundment regularly. On the first day, he occupied third place with a five-bass daily tournament limit going 15.23 pounds. He helped his catch with a 5.27-pounder, the third largest bass caught in the tournament. Brumnett found four keepers for 8.21 pounds on the final day.

“Fishing was slow at first,” he said. “I figured out that the fish weren’t in the bushes like they were on the first day of the tournament. I pulled off the bank and started fishing rocks in about 10 feet of water and caught four keepers. I was throwing a Chatterbait.”

Another local angler, Phillip Lunceford of Stigler, Okla., leaped 13 spots to finish in the Top Five with nine bass and 23.05 pounds. Lunceford caught four bass for 8.01 pounds and 18th place on Day 1. He landed his daily limit on the last day to add 15.04 pounds to his tally, the heaviest single-day bag weighed on Day 2.

“I was flipping bushes with a Reaction Innovations Sweet Beaver in paycheck color with a 3/8-ounce tungsten on 25-pound-test line,” Lunceford commented. “On the first day, I couldn’t get that fifth fish. On the final day, it seemed like a new batch of fish moved up overnight, but they were all cookie-cutters. Before the rain, the fish were starting to move up on the beds. The water was clear and we could see them. When the water rises fast like it did this week, the fish don’t adjust. When the North and South Canadian rivers get to rolling, they turn blood red.”

Just missing the Top five, Kevin Lasyone from Dry Prong, La., finished sixth with nine keepers weighing 22.15 pounds. Lasyone held 11th place on Day 1 with four bass and 11.09 pounds, which included a 4.48-pound kicker. Fishing consistently, he caught a limit on the last day to add 11.06 pounds to his weight, kicking him up five places.

Fellow Louisiana angler, Robert Sparks of Doyline took the seventh position with eight bass weighing 19.16 pounds. Sitting in eighth place on Day 1, with a limit going 11.53 pounds, he moved up a notch by catching three bass at 7.63 pounds.

Jeromy J. Francis from Livingston, Texas, fished eighth with seven bass and 18.71 pounds. On the first day, he sat in fourth with a five-bass limit weighing 13.74 pounds, topped by a 4.51-pound lunker. On the last day, Francis caught two bass totaling 4.97 pounds to fall four spots.

Jumping four spots, Nathan D. Asbill from Poteau, Okla. landed in ninth place with nine bass at 18.36 pounds. He held the 13th spot on Day 1 with four bass and 8.63 pounds. His biggest fish weighed 2.93 pounds. On the last day, the caught his five-fish limit to add 9.73 pounds to his tally.

Ryan Keele of Center, Texas, made a huge leap on the final day to finish in the Top 10 with eight bass at 18.32 pounds. On the first day, he brought in four keepers for 7.09 pounds to hold 23rd place. Climbing 13 spots on the last day, he landed four more bass for 11.23 pounds.

Adrian James from Winnfield, La. finished in 11th place with five bass weighing 17.28 pounds, but caught the biggest fish of the tournament on the first day, a 5.60-pounder. He held second place on Day 1 with 15.46 pounds.

Up to 150 anglers can compete in any Top 150 Solo Series tournament. If 150 anglers participate, the winner will take home a guaranteed $20,000 in cash. If fewer competitors register for an event, the top 20 percent of the field will each earn a portion of the prize money, based upon the number of entries. In addition, the winner of each divisional tournament, plus the top five points earners from each division qualify to fish the 2022 Ray Scott Championship.