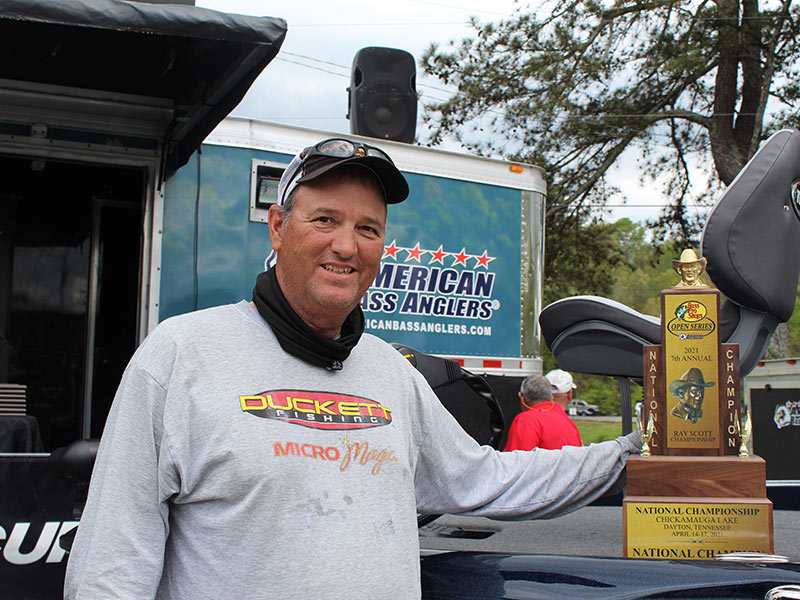 ATHENS, Ala. – Landing his largest bag in the final day of the four-day tournament, Chris D. Baumgardner scored a wire-to-wire victory in the prestigious 2021 Ray Scott Championship, which concluded April 17.
Running out of the Dayton Boat Ramp in Dayton, Tenn. to fish the 36,240-acre Lake Chickamauga, Baumgardner of Gastonia, N.C. brought in 22.71 pounds on the final day of the tournament to secure his Boater Division championship. Landing four straight five-bass tournament limits, Baumgardner won with 78.70 pounds, more than 10 pounds heavier than his nearest competition. He finished with a 3.94-pound average.
Only six of the 148 anglers in the Boater Division caught daily sacks weighing more than 20 pounds and only Baumgardner caught two of them. He jumped out to an early lead on Day 1 with his first monster bag, which weighed 22.18 pounds.
On Day 2, Baumgardner strengthened his lead over the competition with a 17.84-pound catch to give him a two-day total of 40.02 pounds. On Day 3, he caught 15.97 pounds, but still led with 55.99 pounds. On the final day, the new champion landed his personal best sack of the event and the second largest one-day catch in the tournament with 22.71 pounds to clinch the champion title.
For the victory, the new champion won $50,000 in cash plus a new fully-equipped Triton 21TRX bass boat powered by a Mercury outboard, a trailer, a T-H Marine Hot Foot and a certificate worth $1,000 toward the purchase of Garmin Electronics. His new boat package retails for about $65,000.
Billy C. Cline from Argyle, Texas, started in 11th place after Day 1, but moved up steadily throughout the tournament to finish second among the boaters with 19 bass going 68.45 pounds. Ending with a five-bass daily tournament limit for 16.84 pounds on the first day, Cline brought in four bass weighing 14.26 pounds on the second day. That moved him into eighth place with 31.10 pounds.
On the third day, Cline caught another limit, landing his biggest bag of the tournament at 22.47 pounds, the fourth largest single-day bag in the championship. That gave him a three-day total of 53.57 pounds, less than 2.5 pounds behind Baumgardner. Cline finished with 14.88 pounds to remain in second place.
Keeping a lock on third place, Haden Lamb of Ooltewah, Tenn., finished the tournament with a perfect 20-bass four-day limit for 66.49 pounds. He held sixth place on Day 1 with 17.50 pounds, but climbed into second place on Day 2 with an 18.66-pound bag. That gave him a two-day total of 36.16 pounds. On the third day, Lamb brought in 15.14 pounds, dropping him to third place with 51.30 pounds. He landed 15.19 pounds on the final day.
Travis Manson from Conshohocken, Pa., took the fourth spot with 19 bass weighing 63.20 pounds. He caught a five-bass daily limit for 16.14 pounds on opening day to give him 14th place. Missing a perfect limit by one fish on Day 2, he landed 9.69 pounds and dropped to 20th place with 25.83 pounds. Putting in his best tournament effort on Day 3, Manson caught the third largest one-day stringer in the tournament at 22.48 pounds. With that he soared into fifth place with 48.31 pounds. He ended the event with a 14.69-pound bag.
Putting in the best single-day effort of the championship event, Nick W. Kincaid from Coweta, Okla. landed the largest five-bass bag of the tournament at 23.08 pounds on the final day. He anchored that tally with a 9.33-pound beast, the second largest bass seen in the tournament. That helped lift him from 18th place with 39.50 pounds to the Top Five with 18 bass and 62.58 pounds.
On the first day, Kincaid held the 17th slot with a five-bass tournament limit for 15.45 pounds. Catching one short of a limit on Day 2, he brought in 9.68 pounds to drop to 21st place with 25.13 pounds. He caught four more bass on the third day for 14.37 pounds and 18th place.
Early on the first morning, Kenny M. Carroll of Opelika, Ala., landed the only double-digit bass to hit the scales in the championship tournament. His 10.21-pounder took lunker honors. Two other boaters caught bass in the eight-pound range. Trent Menees from Justin, Texas, landed an 8.48-pounder and Bobby A. Tadlock of Clinton, Tenn., put an 8.05-pounder in the boat. Like Carroll’s fish, both eight-pounders also came on the first day of the tournament. 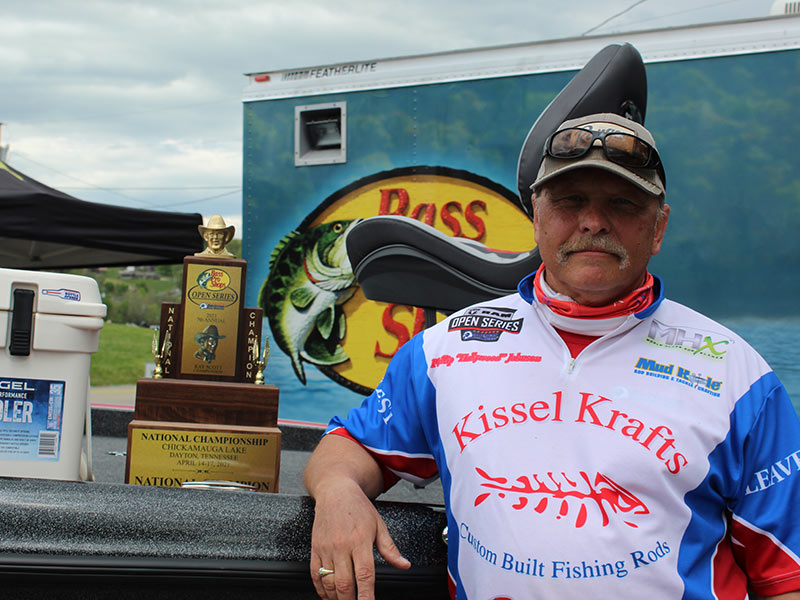 In the Co-Angler Division, Phillip J. Johnson of Griffin, Ga., led the 140 co-anglers three out of four days to take the victory with 10 bass at 35.83 pounds. After catching three consecutive three-bass division limits, Johnson only brought in one 2.99-pounder on the final day, but that put him in the winner’s circle.
On the first day, Johnson held the lead with three bass going 10.68 pounds, one of only 12 double-digit single-day bags brought in among the co-anglers. He added 6.25 pounds on Day 2 to up his tally to 16.93 pounds, but dropped to fourth place.
On the third day, Johnson regained the lead with the largest one-day bag caught in the division at 15.91 pounds. His 7.57-pound kicker, one of three bass topping seven pounds, caught by a co-angler, helped his bag considerably. Heading into the final day, Johnson led with 32.84 pounds, 8.35 pounds heavier than his nearest competition.
Johnson won $25,000 in cash, plus a new fully-equipped Triton 19TRX bass boat with a Mercury outboard, a trailer, a T-H Marine Hot Foot and a certificate worth $1,000 toward the purchase of Garmin Electronics. His boat package retails for about $45,000.
Coming from St. Louis, Mo., Ted J. Daniels finished second with 11 bass going 31.55 pounds, the only day he broke into the Top Five. Daniels held 15th place on opening day with a three-bass daily division limit for 7.62 pounds. He caught two bass the following day for 4.62 pounds, but stayed in 15th place with 12.24 pounds.
On Day 3, caught an 8.81-pound sack, moving him up eight slots to seventh place with 21.05 pounds. On the final day, Daniels landed the only double-digit sack among the co-anglers that day with 10.50 pounds, vaulting him into second place.
Day 2 division leader David L. Marr from Cleveland, Tenn., finished third among the co-anglers with 10 bass and 31.31 pounds. After one day, Marr sat in ninth place with three bass going 8.34 pounds. Bringing in the third largest stringer in the division, three bass at 12.24 pounds, he took the lead from Johnson on Day 2 with 20.58 pounds.
On Day 3, Marr caught his biggest fish, a 3.04-pounder, but that’s the only keeper he caught that day. He dropped into third place with seven bass and 23.62 pounds. He finished the event with a limit going 7.69 pounds.
Eli H. Brumnett of Wagoner, Okla. finished fourth in his division. He brought in 10 keepers weighing 28.44 pounds. Brumnett sat in eighth place after one day with 8.39 pounds, He moved up five spots to third on Day 2 with a 9.29-pound catch. His six-fish limit gave him a two-day total of 17.68 pounds.
Brumnett climbed another notch into second place on the third day with a 6.81-pound effort that gave him 24.49 pounds. On the last day of the event, he caught one bass weighing 3.95 pounds.
Rounding out the Top Five co-anglers, Jose Gallardo of Belle Glade, Fla. finished with nine bass for 28.19 pounds. He held fifth place on Day 1 with three bass and 9.92 pounds. One of them weighed 4.69 pounds. On Day 2, he caught 9.72 pounds, lifting him into second place with a two-day total of six bass weighing 19.64 pounds. After blanking on Day 3, Gallardo came back strong on the final day with a three-fish limit weighing 8.55 pounds.
Chris A. Bowers of Brandon, Miss., won the lunker title in the Co-Angler Division with a 7.97-pounder. Jason E. Prestridge of Paradise, Texas, caught the second largest bass among the co-anglers at 7.74 pounds.
On the final day, only the top 25 boaters and co-anglers fished. The top 20 percent of the boaters and co-anglers received cash prizes, depending upon how high they placed in the standings.
The annual Ray Scott Championship culminates the 2020 season for the Bass Pro Shop Open Series, presented by American Bass Anglers. During the 2020 season, boaters and co-anglers from ABA divisions across the country competed in divisional tournaments and a two-division final event to qualify for this Ray Scott Championship.
American Bass Anglers commitment is to provide low cost, close to home tournaments for weekend anglers and at the same time offer each competitor an upward path for individual angler progression.
For more information about American Bass Anglers visit www.americanbassanglers.com or call (256) 232-0406.
American Bass Anglers is sponsored by Bass Pro Shops, Triton Boats, Mercury Motors, Motor Guide, Berkley, Abu Garcia, T-H Marine, Power Pole, Garmin, Monster Energy, Lucas Oil, Engel Coolers, OPTIMA Batteries, REKS Sunglasses, and HotelPlanner.com. 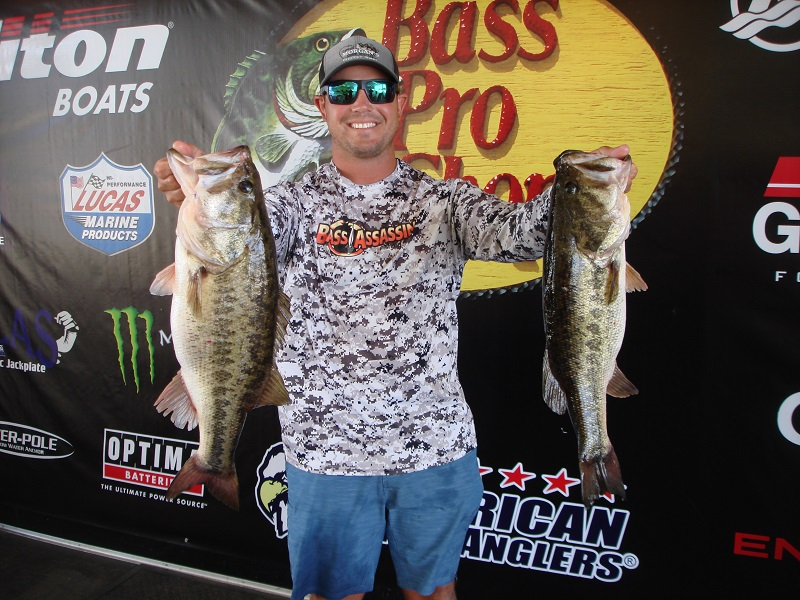