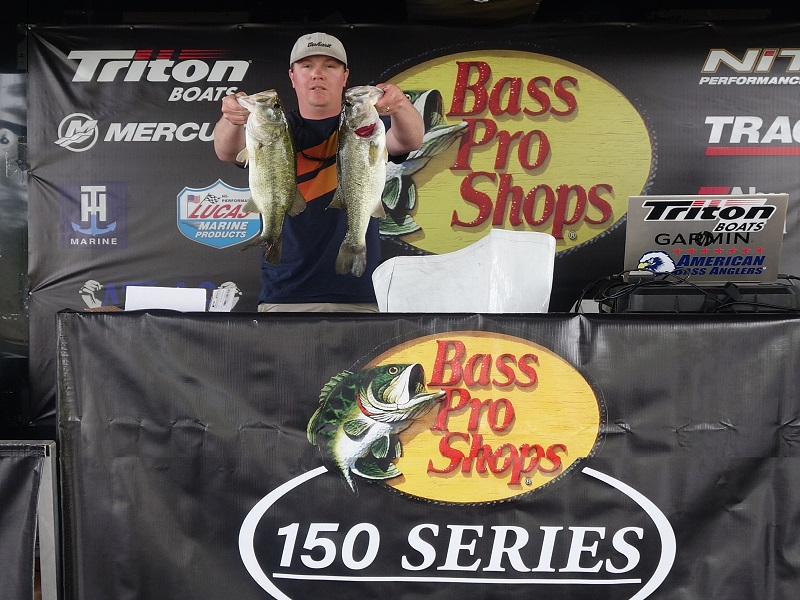 Running out of Cassel Boykin Park Landing in Zavalla, Texas, on March 26-27, 2021, Clark finished with a perfect 10-bass two-day tournament limit weighing 40.37 pounds to take the title in the second of three ABA Top 150 Solo Series Southwest Division events. Beating 82 other competitors, the Center, Texas, angler pocketed $13,000 for the victory.

After the first day, Clark led with a five-bass daily limit going 21.33 pounds, the second largest and one of only three sacks exceeding 20 pounds caught in the tournament. Clark notched a 19.04-pound bag on the second day to secure the victory. His catch averaged just over four pounds per bass.

“I fished some shallow grass in the mid-lake area,” Clark advised. “On both days, I threw a swimbait and a Chatterbait with a V&M Thunder Shad on the back of it. I just seemed to catch the right ones and was able to cull up each day for the win.”

The winner of each divisional tournament, plus the two division Anglers of the Year will qualify to fish the 2022 Ray Scott Championship. Bryan D. New of Belmont, N.C. won the 2019 Ray Scott Championship, collecting more than $100,000 in cash and prizes. He now fishes the Bassmaster Elite Series.

Walt Stevens of Bernice, La. maintained his lock on second place throughout the tournament. He finished with 10 bass weighing 36.49 pounds including a 4.87-pound kicker that he caught on the first day. Stevens tallied 20.47 pounds on opening day, the third largest one-day catch in the event. He brought in another 16.02 pounds on the final day to pocket $5,500.

“I bounced around quite a bit,” Stevens said. “I had to scratch and claw to get a limit each day. I caught more fish on the first day than the second. I think a lot of that had to do with the amount of boat pressure on the lake. Everything was covered up so I had to scramble and go find fresh water to fish. Everything I caught came off soft plastics.”

Trey Bayles made a huge 43-place jump by landing one of the biggest bass caught in the event and the largest one-day stringer. On Day 1, the Eros, La. angler held 46th place with 9.79 pounds. Bayles caught 21.56 pounds on the final day to finish with a 10-bass limit going 31.35 pounds. He anchored that Day 2 bag with an 8.43-pounder, the second largest bass caught in the event. Bayles took home $4,200.

“It was absolutely rough on me that first day,” he confirmed. “I’m not real familiar with the lake so I stayed close. On the last day, I ended up pulling out the spinning rods and got lucky. I caught my bass finesse fishing with a shaky head and a wacky Senko in green pumpkin colors.”

Justin L. Morton also made a giant leap in the standings on the second day to finish fourth with 10 bass at 30.06 pounds to collect $2,500. Barely missing the Top 10 on Day 1, the Etoile, Texas, angler held 11th place with 15.21 pounds. Fishing consistently, he added 14.85 pounds to that total on the final day to move up seven spots.

“I was fished up north and had a lot of spots, but there was a lot of pressure up there on the last day,” Morton commented. “For the final day, I had to can that and go on an adventure to find different fish. I caught 30 before 8 a.m., and kept weeding through them. When I realized I wasn’t going to improve in that spot, I started to look for different areas where I wouldn’t have as much company.”

Rounding out the Top Five anglers, Andrew E. McClusky of Silsbee, Texas, brought in two straight five-bass daily limits to finished with 29.97 pounds. On Day 1, he held 13th place after a 15.16-pound effort. He landed 14.81 pounds on the last day to move up eight notches and earn $2,100.

“I fished transition areas with grass,” McClusky revealed. “I’d run down the mid-lake area first thing in the morning and then come back up later. I caught every single fish each day on a Chatterbait.”

Tater S. Reynolds of Evans, La. started strong, bringing in a 7.85-pound largemouth, the biggest bass caught on the first day of the tournament. He held third place with five bass weighing 18.74 pounds. On Day 2, he brought in another five-bass daily limit for 11.03 pounds, dropping to sixth place with a total of 29.77 pounds.

John L. Soukup of Sapulpa, Okla. dropped three places with a two-day limit of 10 bass weighing 29.37 pounds. He held fifth on Day 1 with a 17.25-pound sack. He anchored that catch with a 7.42-pounder, one of only five bass exceeding seven pounds caught in the tournament. On Day 2, Soukup brought in 12.12 pounds to finish eighth.

Fishing at the south end of the lake, Cole B. Moore captured the tournament lunker title with an 8.98-pound bucketmouth to take the ninth spot with 10 bass going 29.26 pounds. Moore sat in 35th place with 11.42 pounds on Day 1. Helped by his giant largemouth on the final day, the Anacoco, La., angler vaulted 26 steps with a sack weighing 17.84 pounds.

“I lucked up and caught the big one in the hydrilla on a jerkbait,” Moore explained. “I threw it in about 10 feet of water around a scattered clump of grass. The fish hit between 9:30 a.m. and 10 a.m. It was the only bite I had right there.”

Completing the Top 10 for the Rayburn tournament, Jason C. Moorhead of nearby Jasper, Texas, tallied 10 bass weighing 29.16 pounds. He occupied the 14th spot on Day 1 with 15.02 pounds, but moved up four places with a 14.14-pound effort on the final day to crack into the Top 10.

The 83 competitors in the catch-and-release event caught a total of 667 bass weighing 1,609.63 pounds. The average angler caught eight bass for a 19.39-pound sack with the fish averaging 2.41 pounds.

The Southwest Division anglers finish out their inaugural season at Lake Eufaula in Oklahoma. That tournament will run from April 30 to May 1 and launch out of the South Point Cove ramp, located at 400 Lakeshore Drive in Eufaula, Okla. About two hours east of Oklahoma City, the largest lake in the Sooner State covers about 102,000 acres and offers anglers more than 600 miles of shoreline.

In the Southeast Division, anglers will next fish Lake Guntersville in Guntersville, Ala. That tournament also runs from April 30 to May 1. The inaugural ABA Top 150 Solo Series season concludes for everyone on June 25-26 at Lake Chickamauga, Tenn.

Anglers pay $600 to enter each of three divisional tournaments and everyone fishes alone. Anglers can enter events in both divisions if they wish. If 150 anglers sign up to compete in an event, the winner will take home a guaranteed $20,000 in cash. If fewer competitors register, the top 20 percent of the field will each receive a portion of the prize money, based upon the number of entries. The angler who catches the biggest bass in each tournament will take home a $1,000 bonus.