The American Bass Anglers Top 150 Solo Series Southwest Division heads to Texas for Round Two of its inaugural season.
Division anglers will fish Lake Sam Rayburn from March 26-27, 2021. The tournament will run out of Cassel Boykin Park Landing (www.angelinacounty.net/parks) in the mid-lake area of Lake Sam Rayburn near Zavalla, Texas.

Locals call the lake “Big Sam” for its size, but anglers could call it the same thing for the size of the largemouth bass it produces. “Big Sam” regularly produces many bass in the 4- to 8-pound range with some in the 10- to 12-pound range each year.

“The lake is definitely going to be producing some good kickers in this tournament,” remarked Keith Combs (keithcombsbassfishing.com), a Bassmaster Elite Series pro from nearby Huntington. “I expect people will see several fish over nine pounds and maybe some in double digits. It’s common in a tournament at this time of year to see two or three 10-pound fish. I caught a 10-pounder in early March just fun fishing. It’s hard to predict where the tournament will be won because anywhere in the whole lake, for the first time in probably the last 10 years, is capable of producing winning bags.”

Tommy Shelton set the lake record for largemouth with a 16.80-pound bass. The lake also produced a 5.50-pound spotted bass, just shy of the state record for the species. In the past few months, anglers caught several largemouth in the 11- to 13-pound range and numerous 10-pounders. In tournaments, anglers usually need to catch at least 15 to 18 pounds a day to stay competitive. 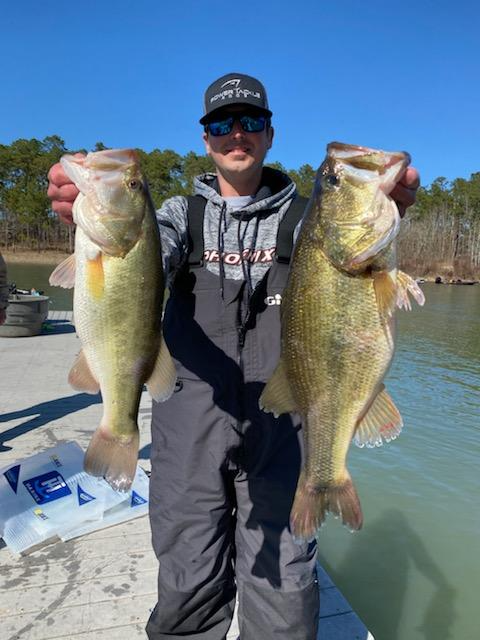 “I know of at least two 13-pounders caught already this year,” detailed Rickie Y’Barbo with East Texas Guide Service (936-676-6408, www.samrayburn.com) in Zavalla who guided on the lake for more than 50 years. “It will be good fishing. More than likely, people will see some double-digit fish caught in this event. I believe we’ll see some 20-pound stringers.”

During a Major League Fishing tournament held Jan 28-30, 2021, Derek Mundy landed a bass weighing 13 pounds, 10 ounces. He finished the second day of the tournament with a 39-pound, 7-ounce bag for a single day average of 7.88 pounds. He won the tournament with 15 bass going 70 pounds and 11 ounces.

“That 13-pound bass was the biggest bass I’ve ever personally seen,” Combs recalled. “I would expect to see some one-day bags in the mid- to upper 20-pound range. To win, I would guess that people would need to bring in at least 47 to 48 pounds over two days. A lot of the anglers will bring in 17- to 18-pound bags each day.”

“The lake has so many 3- to 5-pound bass,” Combs commented. “A lot of anglers will bring in a solid limit of 2.75-pounders with a couple bass in the 3- to 5-pound range. Replace one small keeper with a 10-pounder and it’s a game-changer. It can happen a few times in this tournament. One fish could really make a difference in somebody’s standings.”

Bass typically begin spawning when water temperatures reach the mid-60s. A severe cold front dumped an enormous amount of snow, by Texas standards, on the Lone Star State a few weeks ago. That possibly delayed the spawn a bit, but warmer temperatures in the past of couple weeks put the spawning season back on track. With water temperatures already above 60 degrees, anglers fishing the tournament should find most of the bass in pre spawn or spawning mode, but some already spawned.

“During the freeze a few weeks ago, it got down into single digits here,” Y’Barbo advised. “That really shut the fishing down for a while, but it’s coming back pretty strong. Some fish had already spawned during the full moon in February. The next full moon will be March 28, one day after the tournament ends. Recently, I’ve caught fish bigger than five pounds in three to four feet of water.”

“I feel strongly that the tournament will be won in four feet of water or less,” Combs agreed. “If I was fishing this tournament, I would stay in very shallow water. The bass will be trying to get to the shallows everywhere in the lake. The big creeks will come into play as well as small pockets off the main lake. The outside banks of some big creeks and islands will be good places to look for fish.”

Many people might work the banks looking for bedding fish. Anglers can do that in some places in Lake Sam Rayburn, but not everywhere. Recent rains muddied the water, particularly in the north. Water becomes clearer the farther south one goes, but the northern part of the lake remains stained to murky. That doesn’t mean anglers can’t still catch spawners.

“The lake’s not very clear right now,” Combs said. “I go to spawning places to fish, but not necessarily try to see bass. In some of the best places to fish the lake, people won’t be able to see fish on the beds right now, but those are still good places to fish. At tournament time, anglers will be able to pull into little obscure pockets off the main lake and catch big fish. The mouths of the creeks will also be good. The whole lake will really start to come into play before tournament time.”

Combs recommends throwing a lot of soft-plastic creature baits in the shallows. Drag creature baits along the bottom. The bait might pass through a nest with a giant largemouth in it. Bass don’t eat much when on the beds, but they might grab something that could threaten their eggs or fry, such as aquatic salamanders, crawfish, and bream. Use baits that mimic these nest raiders. He also suggests throwing stickbaits and other soft-plastic temptations.

“In late March, people can fish many options on Lake Sam Rayburn,” Combs confirmed. “I would definitely try a Strike King Rage Bug in green pumpkin or Okeechobee Craw. That’s one of my favorite baits for fishing Sam Rayburn. I would also try a 5- or 6-inch Strike King Ocho stickbait. I’d have one rigged weightless and one rigged with a really small sinker. I’d also have on a Strike King hollow body frog. If I wasn’t catching fish, I’d keep changing areas. The bass are going to be somewhere shallow. If it’s not happening in one area, just keep moving around to find them.”

Patches of hydrilla, lily pads, coontail and pondweed cover portions of the lake. Usually, aquatic grass grows out to about 10 to 12 feet deep. Another grass line forms closer to the bank in less than two feet of water. These grass beds make great places to catch prespawn and spawning bass.

“I believe an angler can catch fish deep or shallow,” Y’Barbo revealed. “When I say deep, I’m talking 10 to 12 feet. Fish will be looking for places to spawn. I recommend throwing Chatterbaits or some kind of bladed jig. Red lipless crankbaits, like a Rat-L-Trap, are always good at Rayburn in the spring. People can also throw the trusty soft plastics. For plastic colors, I recommend watermelon reds and other darker colors.”

Although known as a lunker largemouth lake, Big Sam also contains a huge crappie population. Local anglers built thousands of brush piles everywhere in the lake to attract crappie. These piles also attract bass that feed upon the crappie. With good electronics from companies like Garmin, anglers can find these isolated piles with ease.

“The lake is at a good level right now,” Combs observed. “It’s almost full, which means it has lots of bushes and other cover in the water. The lake has good grass in the mid-lake area, but not as much to the north. It also has some good grass in places at the south end where we haven’t seen grass in years. I think a good angler will be able to catch fish just any anywhere on the lake.”

Created in the flatlands of East Texas, the lake bottom doesn’t change drastically. However, anglers can find numerous inundated old creek channels that once flowed through the piney woods. These channels create humps and drops where anglers can work Carolina rigs, Texas-rigged worms, football-head jigs, heavy spinnerbaits and deep-diving crankbaits. Anglers can also fish brush, fallen trees, and other woody cover along the banks, good places to flip plastic creature baits. Anglers might also spot some schooling activity in the major creek channels.

“I think the Veach area will be a strong contender as a place to win this tournament,” Y’Barbo predicted. “The Deer Stand area might be producing some fish, but I like the lower end for big fish.”

On such a massive lake with large wide-open stretches where nothing blocks the wind, anglers need to be careful. When infamous March winds start howling, they can churn the sprawling lake surface into treacherous waves in a hurry. However, winds can also help anglers find fish.

A stiff breeze blows plankton toward windward shorelines. Baitfish feed upon plankton and follow the food. Bass follow shad and other baitfish. Consequently, a windy shoreline can often produce excellent results, especially when throwing lures that resemble shad like crankbaits or spinnerbaits.

“As a general principle, if the wind is blowing 20 miles per hour or more, a spinnerbait fisherman is going to catch more bass,” explained Alton Jones, a former Bassmaster Classic champion from Waco, Texas. “The harder the wind blows, the better bass bite spinnerbaits. A strong wind lapping against rocky banks produces a lot of oxygen and noise that can hide my presence. I make long casts and run a 1/2- or 3/4-ounce willow-leaf spinnerbait as fast as possible parallel to the bank. I like white and chartreuse with double No. 4 and No. 3 gold willow-leaf blades. When bass hit, they practically knock the rod out of my hands.”

From Big Sam, the Southwest Division heads north to fish Lake Eufaula in Oklahoma from April 30 to May 1 for the final division event of the inaugural season. In the Southeast Division, anglers fish Lake Guntersville in northern Alabama on the same weekend. The first ABA Top 150 Solo Series season concludes for everyone on June 25-26 at Lake Chickamauga, Tenn.

Anglers pay $600 to enter each divisional tournament and everyone fishes alone. Anglers can enter tournaments in both divisions if they wish. If 150 anglers sign up to compete in an event, the winner will take home $20,000 in cash. If fewer competitors register, the top 20 percent will each receive a portion of the prize money, based upon the number of entries.

In addition to earning cash prizes, the winner of each divisional tournament, plus the two-division Anglers of the Year will qualify to fish the 2022 Ray Scott Championship. Bryan D. New of Belmont, N.C. won the 2019 Ray Scott Championship, collecting more than $100,000 in cash and prizes. He now fishes the Bassmaster Elite Series.