Powell Wins Comes From Behind At Eufaula

From Dothan, Ala. just south of the 45,181-acre Chattahoochee River impoundment on the Alabama-Georgia line, Powell caught his two-day event limit of 10 bass weighing 42.30 pounds for a tournament average of 4.23 pounds. With 128 competitors in the field, Powell pocketed $17,500 for the win. 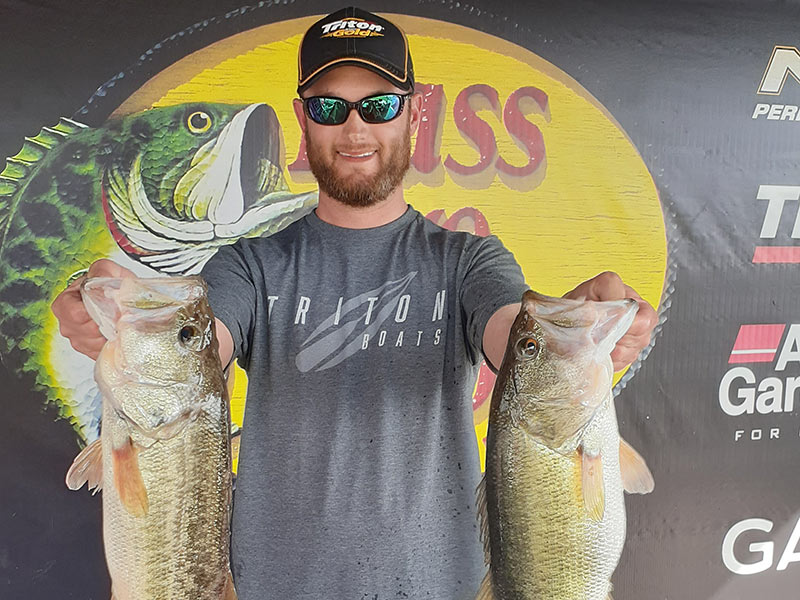 “In practice, I didn’t fish a lot,” admitted the first winner of the new ABA Top 150 Solo Series Southeast Division tournament circuit. “I just looked around because there was another big tournament going on. I tried to stay out of the other people’s way. I looked for areas that didn’t seem to get a lot of pressure from the other tournament competitors.”

A major winter storm forced Major League Fishing to postpone and move its tournament scheduled for Lake Palestine near Tyler, Texas, to reschedule it for Lake Eufaula. Both the MLF and the ABA tournaments ran out of Lakepoint Resort State Park in the town of Eufaula, Ala.

Powell held ninth place on Day 1 with 17.06 pounds. On the final day, he landed 25.24 pounds of keepers for a 5.05-pound average. Only six anglers in the tournament caught daily bags exceeding 20 pounds, none for two days in a row.

“On the first day, a three-pounder was a good fish,” Powell remarked. “On the final day, I headed down the lake and caught bass around every grassy point, dock, and brush pile I fished. It was like they all pulled in overnight. I caught four-pounder after four-pounder. My biggest and smallest weigh fish on the final day didn’t vary more than about a pound.”

The new champ caught most of his fish in the morning on a chartreuse spinnerbait. After the morning bite, the bass no longer wanted a spinnerbait. Later in the afternoon, Powell switched to a jig.

“Once the sun came up a bit, the fish got off the spinnerbait,” the victor explained. “Good thing it didn’t really get sunny until about noon. In the afternoon, I fished a brown jig with Big Bite Baits Dean Rojas Fighting Frog trailer on the back.”

Ryan Horton of Palmetto, Ga. held second place from wire to wire to pocket $6,000. On the first day, he landed the third-largest stringer at 21.02 pounds. He anchored that bag with the tournament lunker, a 7.75-pound bucketmouth that hit a spinnerbait up shallow. 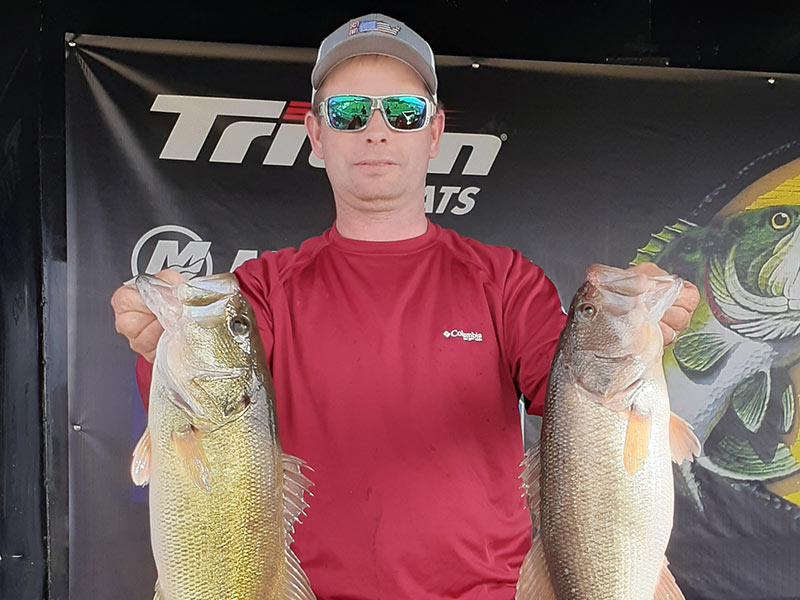 “I did a lot of scratching around,” Horton quipped. “There was a lot of boat traffic on the water. I fished mostly on the south end of the lake and got blessed with some good bites. I caught the big bass on a spinnerbait in about three or four feet of water.”

On the first day, Horton fished from mid-depth ranges to the shallows. He caught most of his fish early in the morning. On the second day, Horton brought in 18.09 pounds to finish with 39.11 pounds.

“I was looking for fish moving into the beds and throwing a spinnerbait and jig,” Horton said. “I needed a little bit of stain on the water before I could get them to eat.”

Frederick S. Daughtry from Abbeville, Ala. at the south of the lake held third place throughout the tournament and collected $5,000 for the effort. On the first day, he landed 20.97 pounds, including a 6.26-pound kicker. On the second day, he landed 15.71 pounds, anchored by his tournament-best, a 6.60-pounder. Daughtry finished with two consecutive daily five-bass limits to end with 36.68 pounds for the event. 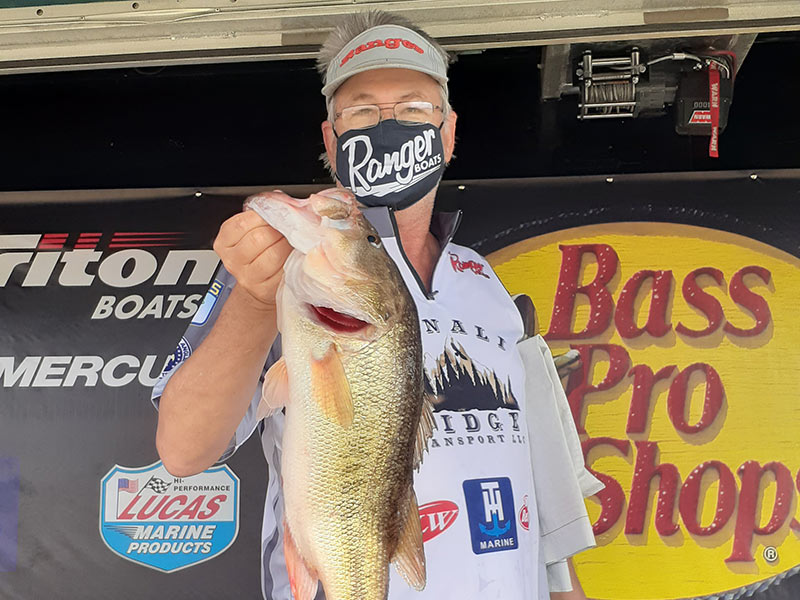 A junior on the Auburn University fishing team, Robert J. Cruvellier came all the way from Montreal in Quebec, Canada, to place fourth. A check for $3,500 should help with his college expenses.

On Day 1, Cruvellier held fifth place with a five-fish daily limit weighing 17.92 pounds including a 5.72-pound kicker that hit a gold Chatterbait. He lost another big bedding fish with only 10 minutes until weigh-in time after working it for about two hours. 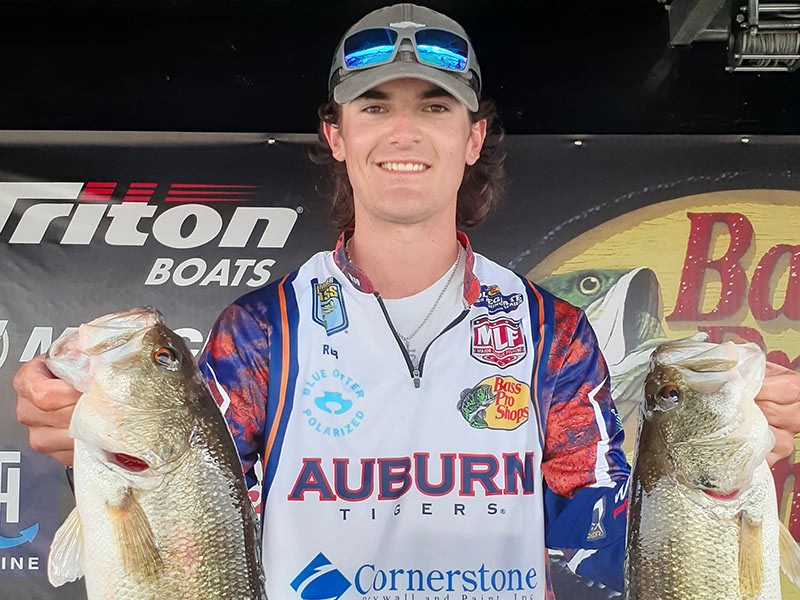 “Fishing has been pretty good overall,” the young angler advised. “With the lake getting hammered, I wrote off the docks. This warming trend messed up how I had been catching the fish in practice. The warming temperatures pushed bass up shallow to spawn. Also, the muddy water blew out a few areas for me.”

On the final day, Cruvellier completed his 10-fish tournament limit with a 16.76-pound sack. With that, he jumped one place to end with 34.68 pounds.

“With the warming trend, I started looking for shallow cruisers and caught a few,” Cruvellier commented. “On the last day, I didn’t have a really big fish, but I had mostly better fish than the first day. I fished water three feet deep or less, flipping a Texas rig to beds, but I also fished a wacky rig. Color really didn’t seem to matter. I rotated through a lot of colors. On the beds, I used brighter colors. I caught some on reddish, orange plastics.”

Right behind, another angler from the Chattahoochee River Valley, Bobby D. Padgett from Lagrange, Ga. moved up one place to finish fifth with 10 bass going 34.66 pounds. On Day 1, he held sixth place with 17.81 pounds and added 16.85 pounds on the last day. He took home $2,800 for the fifth-place showing.

Taking sixth place in the tournament, Ryan Ingram of Phenix City, Ala. brought in a 10-bass two-day limit for 34.41 pounds. On Day 1, he held 27th place with 13.63 pounds but caught the second-largest sack of bass on the final day. His 20.78-pound effort helped him vault up 21 spots.

Dropping three notches, Dax Bumpers of Marietta, Ga. finished seventh with 10 bass and 33.19 pounds. On the first day, he held fourth place with 20.75 pounds, including a 7.08-pounder he caught on a worm. He added 12.44 pounds on the final day.

Coming all the way from Raleigh, N.C., Mike Corbishley took the ninth spot with two five-bass daily limits totaling 32.46 pounds. Corbishley held 14th place on Day 1 with 15.53 pounds. He bested that on Day 2 with a 16.93-pound effort to jump up five places.

From Eufaula, the Southeast Division heads to Lake Guntersville in Scottsboro, Ala. on April 30-May 1. Then, the anglers finish the season in both divisions on June 25-26 at Lake Chickamauga in Dayton, Tenn.

In the other ABA Top 150 Solo Series division, the Southwest Division heads to Lake Sam Rayburn near Zavalla, Texas, from March 26-27. The division concludes its competition for the year on April 30-May 1 at the other Lake Eufaula near Eufaula, Okla.

Anglers pay $600 to enter each event and can register to fish tournaments in both divisions if they wish. If 150 anglers participate in a tournament, the winner will take home a guaranteed $20,000 in cash. If fewer competitors register, the top 20 percent of the field will each earn a portion of the prize money based upon the number of entries.

In addition, the winner of each tournament, plus the two-division Anglers of the Year will qualify to fish the 2022 Ray Scott Championship. Bryan D. New of Belmont, N.C. won the 2019 Ray Scott Championship, collecting about $100,000 in cash and prizes. He now fishes the Bassmaster Elite Series.