The new trail, the ABA Top 150 Solo Series, features two regional divisions – Southwest and Southeast. Each division will hold three regional tournaments. The Southwest Division kicks off the new season on Feb. 5-6 at Toledo Bend Reservoir. In the Southeast Division, anglers open the season Feb. 26-27 on Lake Eufaula in Alabama. To Register for this first event (Click Here)

“We have been asked for years to have a solo tournament trail with an affordable entry fee and a good payback,” announced Morris Sheehan, president, and owner of American Bass Anglers. “This is that trail. These tournaments have been scheduled on great lakes at the prime time for big bass stringers.”

Most of the rules remain the same as for other American Bass Anglers events, except every ABA Top 150 Solo Series tournament will run for two days on Fridays and Saturdays, and all anglers fish alone. In each event, up to 150 anglers can compete for cash prizes worth up to $20,000 and a chance to participate in the annual Ray Scott Championship.

“We’ve had many requests from anglers asking about a higher payout tournament trail or possibly a singles trail,” confirmed Christopher Wayand, tournament manager for the ABA Top 150 Solo Series. “There was a big gap from the Bass Pro Shops Open Series into the next higher level of competition. The Top 150 Solo Series is designed for those anglers who want a mid-level entry fee tournament trail with a substantial payback. It costs a bit more to enter this new tournament trail, but it’s not out of range for most weekend anglers.”

Anglers pay $600 to enter each of the three divisional tournaments and will fish alone. If 150 anglers sign up to compete in an event, the winner will take home $20,000 in cash. If fewer competitors register, the top 20 percent of the competitors will each earn a portion of the prize money, based upon the number of entries. 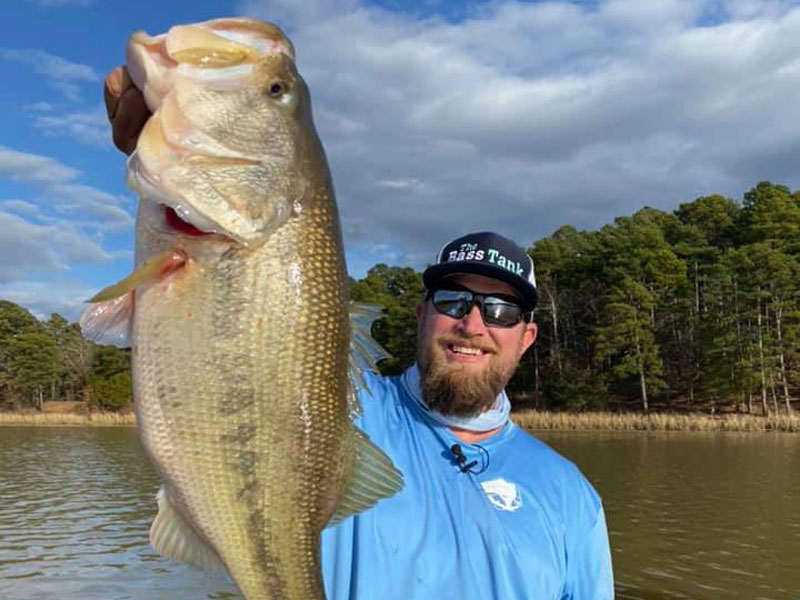 “I’m excited about fishing higher-level events that don’t require a tour mentality,” explained John Soukup of Sapulpa, Okla. “I enjoy fishing solo because I can fish the way I want to fish. I think it’s a purer format for competition that makes it fairer for all competitors. When it comes to head-to-head competition at a higher level, that’s the route things should go.”

In addition to earning major cash prizes, the winner of each tournament, plus the two-division Anglers of the Year will qualify to fish the annual Ray Scott Championship for a possible total of eight people selected from the series. Since this is the inaugural year for the ABA Top 150 Solo Series, winners and division Anglers of the Year from the 2021 events will earn slots to compete in the 2022 Ray Scott Championship.

In some tournament circuits, the same competitors fish the same lakes every time. This trail allows anglers to fish lakes outside their home areas, perhaps in a different state, without crossing the continent to do it. Many anglers enjoy an opportunity to fish different places they might not necessarily go otherwise. Anglers can register to fish events in both divisions if they wish.

“We created two regions with tournament venues inside each region,” Wayand explained. “That way, people can possibly fish a new place or a different state, but they don’t need to travel too far to do it.”

After the Southwest Division opens the entire season Feb. 5-6 at Toledo Bend on the Louisiana-Texas line, anglers then go to nearby Lake Sam Rayburn in Texas from March 26-27. The divisional season wraps up at Lake Eufaula, Okla. from April 30 to May 1.

In the Southeast Division, anglers first fish the other Lake Eufaula, the one on the Alabama-Georgia line, from Feb. 26-27. Next, the division heads to northern Alabama to fish Lake Guntersville on April 30-May 1. The Southeasterners conclude the series for the year June 25-26 at Lake Chickamauga, Tenn.

“We are excited and looking forward to these events, so everyone who wants to fish them needs to hurry and get signed up,” Wayand advised. “Priority for each angler will go to those who sign up for the entire season or put the deposit down on the entire season. People can enter individual events if there’s room.”

Slated for Feb. 5-6, the first-ever ABA Top 150 Solo Series tournament will run out of Cypress Bend Park, located at 3462 Cypress Bend Drive in Many, La. The largest reservoir in the South, Toledo Bend covers about 185,000 acres and runs 65 miles along the old Sabine River channel, straddling the Louisiana-Texas line. With numerous creeks and coves, the massive impoundment offers anglers 1,264 shoreline miles.

“The Toledo tournament could be tough,” predicted Billy Graves from Montgomery, La. “A lot depends upon the weather. Anybody can get lucky on Toledo Bend and catch a big sack one day, but not two days in a row. That’s why I like the two-day format. I try to look for a more consistent pattern.”

Known for producing giant bass, Toledo Bend regularly delivers double-digit largemouths, particularly in late winter or early spring. Spawning usually starts first in the northern part of the lake, but not all bass spawn at the same time. The spawn could continue from February until early June, peaking in March or April.

Both Texas and Louisiana heavily stocked Florida largemouths into the lake since the 1980s. Eric Weems set the Big Bend lake record with a 15.32-pounder he caught on a green and black 1-ounce Cyclone jig tipped with a watermelon-colored Gene Larew plastic Hawg Craw trailer while fishing in Six-Mile Creek.

“I have fished Toledo Bend in the winter and love it,” declared Randy Qualls from Streetman, Texas. “Often, fish will be in the grass, but there’s not much grass in the reservoir right now, so I anticipate a deep bite. People might be fishing with jigging spoons or drop-shots.”

In the fall of 2020, lake managers sprayed Toledo Bend for giant salvinia, but the poison also killed other types of grass. Some grass remains in the extreme southern part of the reservoir around Housen Bay and Six-Mile Creek.

“Not having grass at Toledo Bend might be to my advantage,” Soukup remarked. “The people who regularly fish Toledo Bend won’t be able to go to their favorite grassy spots. I’ve only fished Toledo Bend once in the fall of 2020. It’s a huge lake. I have to break it down to a few areas. I think some fish will be in pre-spawn and some will be spawning. I like to fish a lot of shallow, backwater areas. There’s always an opportunity for someone to sneak off into a backwater and find some early spawners.”

On March 26-27, the Lake Sam Rayburn tournament will take off from Cassel Boykin Landing near Zavalla, Texas. The largest reservoir entirely within Texas, “Big Sam” covers 114,500 acres on the Angelina River with more than 750 shoreline miles. The water drops to more than 80 feet deep in places.

“For Rayburn in March, people better bring their ‘A’ game every day,” Graves recommended. “That’s prime time on Rayburn. Some people in practice will be marking 6- to 8-pounders on the beds. It’s probably going to take more than 20 pounds a day to be competitive.”

Lake Sam Rayburn can also produce bucketmouth bass. Tommy Shelton caught the lake record largemouth, a 16.80-pounder, on a chartreuse and white frog. On Jan 9, 2021, an angler landed a 13.44-pounder while fishing a Carolina rig.

“Rayburn has some monster bass,” Qualls detailed. “Rayburn could have a lot of bedding fish at that time. It’s definitely going to be a shallow bite by then. I think the bass will be in full spawn mode by tournament time. Some anglers will catch bass by sight fishing. Others will throw swimming jigs or catch fish by flipping.”

The massive reservoir fishes similar to Toledo Bend, but now holds more grass. Like at Toledo Bend, the bass spawn on Sam Rayburn generally peaks from late March to mid-April but could start earlier and last longer. During late March, anglers could find pre-spawn, bedding, and even post-spawn fish together all in one cove.

“Rayburn has grass,” Soukup confirmed. “I’ve fished Rayburn in March before and have seen bass on beds. I’ve seen empty beds way earlier than I expected. With the grass and a warmer environment, surely some fish will be on the beds during tournament time. People can catch fish whether they are going for spawners, pre-spawners or post-spawners. This tournament will be about determining where to find the heaviest fish, not necessarily who gets the most bites.”

The final Southwest Division event this year takes place April 30 to May 1 and launches from South Point near Eufaula, Okla. The largest lake in Oklahoma, Lake Eufaula covers about 102,200 acres. Impounded in 1964 on the Canadian River about 27 miles upstream from where it hits the Arkansas River, the 15th largest lake entirely within the United States covers parts of McIntosh, Pittsburg, Haskell, and Okmulgee counties. Tributaries include the North Fork of the Canadian River and the Deep Fork River.

“I’m probably looking forward more to going to Eufaula than any of the others because I never been there,” Graves revealed. “I like traveling and fishing new places. Sometimes, too much history on a lake can kill a person during a tournament. I’m guessing the bite on Eufaula will be shallow with some fish on the beds. I understand it has a lot of stained, muddy water. Spinnerbaits win a lot of tournaments in that kind of water.”

Lake Eufaula averages about 23 feet deep but drops to more than 80 feet in places. It offers anglers more than 600 miles of shoreline to fish. Shorelines range from sandy beaches to rock bluffs.

“At that time of year, a person fishing Eufaula who falls out of the boat and can’t stand up is probably fishing too deep,” Qualls quipped. “Bass stay real shallow at Eufaula all year long. I fished it several times and have done quite well. I’ve put eight-pounders in the boat at Eufaula, which is quite big for Oklahoma.”

The sprawling reservoir contains both largemouth and smallmouth bass as well as spotted bass. The lake can produce some double-digit largemouths, but not as many as at Rayburn or Toledo Bend. Some Eufaula bass approach the 12-pound mark.

“Eufaula spreads out quite a bit,” Soukup advised. “I think it will be a shallow angler’s dream. Fish will be everywhere, so everybody will have an opportunity to catch bass. Some bass will have already spawned, but we might hit right at the peak of the spawn. I don’t think we’ll see the same size winning weights as on Toledo Bend or Rayburn, but it could take two 20-pound sacks to win that event. People are going to catch a lot of 3- to 5-pounders.”

When asked how they would change the format if they could, some anglers expressed interest in seeing divisional championships added to the schedule. Some would also like to see a combined series championship.

“We thought about adding divisional championships or even a single head-to-head championship for each division, but since this is the first year, we’re just going to go with the original plan for now,” Wayand commented. “This trail is new and we can reformat it or change something later if we feel that’s the thing to do in the future.”