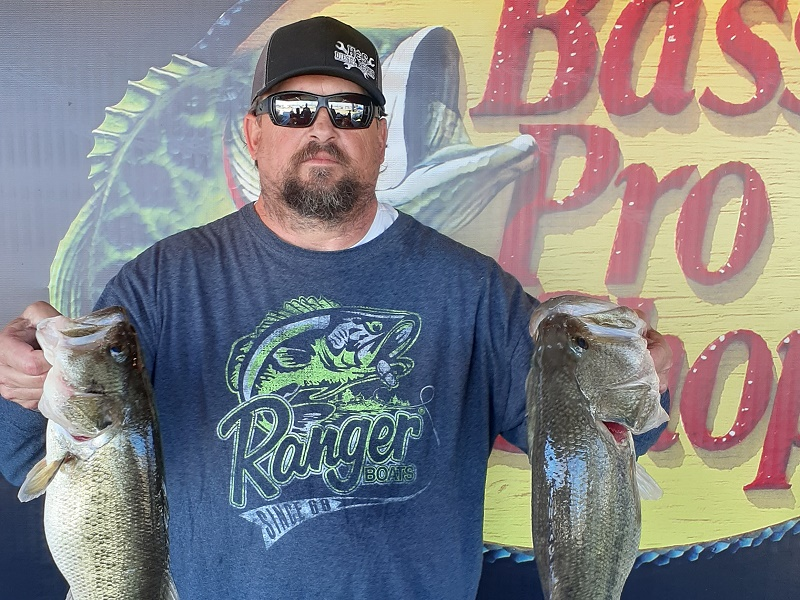 ATHENS, AL. – Robert Sparks of Heflin, LA won the Bass Pro Shops Open Series East Texas tournament, held February 1st on Lake Palestine, TX.  Running out of lake Palestine Resort, Robert caught five-bass weighing 17.90 lbs. Still raining for almost the entire week, the lake level was low and, on the rise, but the weather was warm again.  The same as the week before on Sam Rayburn, the skies broke, and the sun came out just in time for the anglers to get on the water and enjoy some good sunshine and 60-degree weather.

“This was my first-time fishing Lake Palestine.  I came over here just to learn some new water and just go fishing.  I never expected this.  I had one area I stayed in all day.  I love to flip docks so I picked an area and went after it.  The morning started off great but around 10:00 AM my trolling batteries got weak and I could barely move.  I had a limit so I went to an offshore area and started drifting.  That’s where I culled my last keeper and decided to come in early. I started to head home and you sent me a text to turn around and come back telling me I had won.  This is great.”  Said Robert.

In second for the boaters, Trent Menees of North lake, TX weighed a 5 fish limit for 15.67bs.

“I was fishing docks and some offshore structure today.  The bites have been slow this week but the fish that are biting have been good sized.  I stayed with that one area all day an caught my limit with less than 10 bites.  The fishing is slow right now and will get better, but the bites were quality.”  Said Trent.

Matthew Helsley of Duncanville, TX took third place honors right on the heels of Trent with a 5 fish limit at 15.60 lbs.

“Practice was bad.  I only had 3 keepers in 2 days of fishing, but they were big too.  Just like Trent said.  The ones we caught were quality.  I slowed way down and threw a weightless fluke on secondary points up North in a well-known area.  They were full pre spawn fish.  I think the lower water level threw a lot of guys off that generally target these shallow areas during the spawn.  I didn’t fish water any deeper than 3 feet all day and was right there.  I just needed a good kicker.”  Stated Matthew.

Finishing fourth, Randy Brewer of South Lake, TX landed a five-bass limit for 15.21-lbs. Billy Cline of Bartonville, TX rounded out the top five boaters with a limit for 15.13-lbs.  The monster bass of the tournament for the boaters was a beauty at 10.99 lbs, caught by Landon Markum. 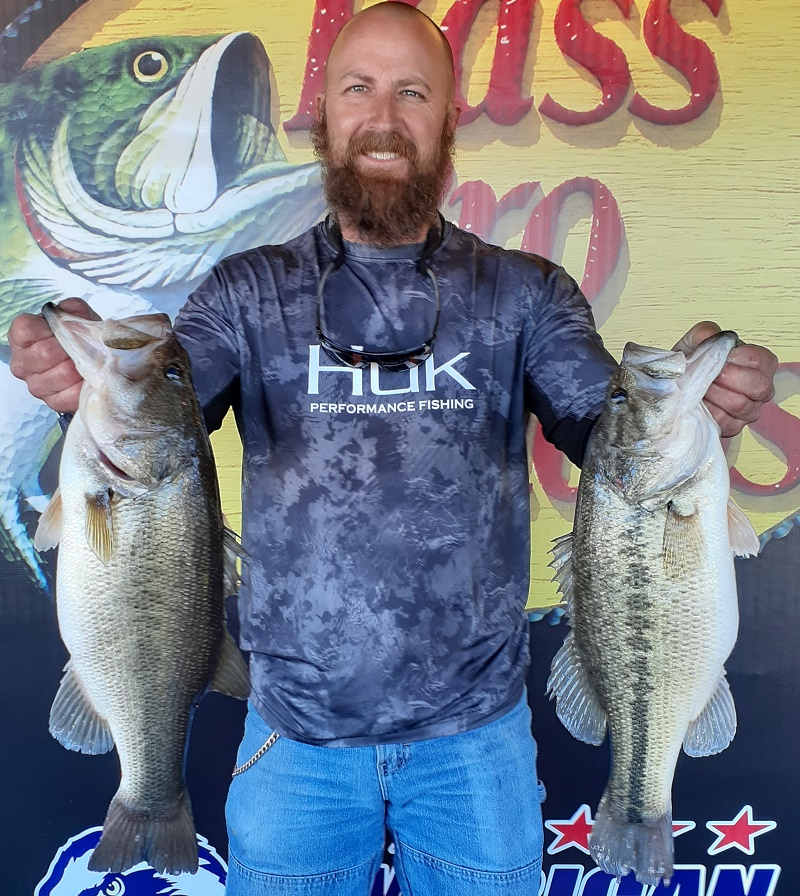 Top honors in the co-angler division was taken by Jason Prestridge of Paradise, TX when he came up on stage.  His 3 fish limit tipped the scales at 12.60 lbs.  A great limit for 3 fish!

“A couple days of practice with very few bites just like Matt said.  I decided to just enjoy the weather and have fun.  My boater started out on a rock shore off the main lake where I picked up a square bill and worked it around the rocks.  It didn’t take long and a 5 lber jumped on it.  That set my confidence to keep throwing the crankbait.  After what felt like forever and a zillion casts, I finally hooked up again.  This time the fish was not hooked well at all.  One hook was barely holding on, but we got her in the net.  We stayed near rocks and I ended up losing that crankbait.  It was the only one I had in that color. I tried everything I could with no luck.  My third fish came on a shakey head.  I felt like I had a shot at it, but I have been there before and watched it slip away.  I watched everyone come in and my big fish was beaten but I had finally won an ABA event!  Thank you ABA for giving me the opportunity to do what I love and to have the friendly competition I need in my life.”  Said Jason.

“We fished docks today.  I only had 3 bites so I’m glad I was able to land them all.  I caught one on a black and blue jig and the other two on a shakey head.  It seemed like the pattern to them for me was on the outside edges of the docks, but It’s hard to put a pattern to them when you fish all day and only catch three.” Said Michael.

In fourth place among the co-anglers, Thomas Helsley of Duncanville, TX brought in three bass for 6.62-pounds, and John Walker of Allen, TX finished 5th with 2 fish for 5.32 lbs.

Slated for February 23rd, the next tournament will be held back on Lake Texoma running out of Highport Marina. At the end of the season, the best anglers from across the nation advance the Ray Scott Championship to be held at Lake Chickamauga, TN in April of 2021.