“My day started off good, but slow.  I had one area I stayed in all day and didn’t have to run until it was time to come back.  I was throwing a Carolina rig in this area just moving around and picked up one here, one there, and eventually finished out my limit.  I was fishing in 10-15 feet of water and had the right bites.  It was a really good day for me.”  Said David.

“I just rotated between a couple of offshore spots and 8-10 shallow stretches.  I was throwing a crankbait offshore then throwing a trap up shallow and just bounced back and forth between them all day.”  Said Derek.

Albert Collins of Nacogdoches, TX took third for the boaters, right on the heels of Aaron with five bass for 19.33 lbs securing a check for $800.00

“I started out with a limit on a Mister Twister Buzz Bug Carolina Rigging on a point.  I moved to some grass around 9 AM throwing a 6th Sense Quake, culled with a 4.5, moved to some drop offs with the Buzz Bug and flipped the rest of the day.  I didn’t catch a lot of fish today, but I got some decent bites.”  Stated Albert.

Finishing fourth, Kevin Lasyone of Dry Prong, LA landed a five-bass limit for 18.46 pounds.  Aaron Johnson of Shreveport, LA rounded out the top five boaters with five bass at 18.04 pounds.  Big bass for the boaters was caught by David Beason weighing 8.74 lbs giving him an additional $690.00. 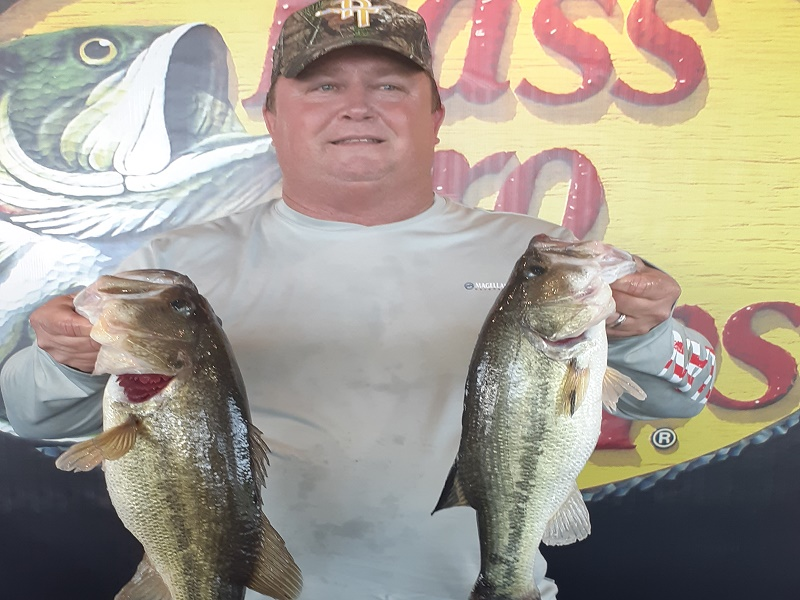 The co-angler division was a close race until Steven English of Longview, TX came up on stage.  His 3 fish limit tipped the scales at 13.80 lbs.  A great limit for 3 fish!  1st place for the coanglers earned him a check for $1400.00.

“I was just watching my boater and did the same thing he did.  I was with the winner, David Beason.  What he did was working for him so why not right?  I threw a Carolina Rig just like him and man did we catch them.  What a day.  We had a blast even though we didn’t move around at all.  The fish were there so it didn’t make sense to leave them. Said Steven.

Taking second for the co-anglers, Austin White of Lumberton, TX, brought in a solid three-bass limit weighing 12.61-pounds earning him a check for $650.00.

When Austin came up on stage for his award, I told him on any other Lake but Sam Rayburn he would have won this tournament.  12.61 pounds with only 3 fish is tough to do even when you can weigh in 5.  When I asked him how he caught his fish he just couldn’t resist… “Well, I picked up a rod, made a cast, and when I got a bite, I set the hook and reeled it in”.  I had to re-phrase my question to get a straight answer out of him.  “I caught all my fish on a Rat L Trap today.  There wasn’t a real hot spot where I caught a lot of fish, and I didn’t catch many, but they were good ones.” Austin said.

“I caught my fish on a wacky rigged Senko up shallow in the hay grass.  I didn’t catch many, only 4, but I lost a good one that may have been a winning fish.  I would have culled with it for sure.” Said Brian.

In fourth place among the co-anglers, Larry Lovell of Emory, TX brought in three bass for 11.10-pounds.  Also, a 7.16 lb lunker that took big bass honors for the coanglers. Joe Wilroy of Woodville, TX rounded out the top 5 with three bass for 10.58-pounds.

Slated for March 28th, the next tournament will be held back on Sam Rayburn running out of the Umphrey Family Pavilion. At the end of the season, the best anglers from across the nation advance the Ray Scott Championship to be held at Lake Chickamauga, TN in April of 2021.