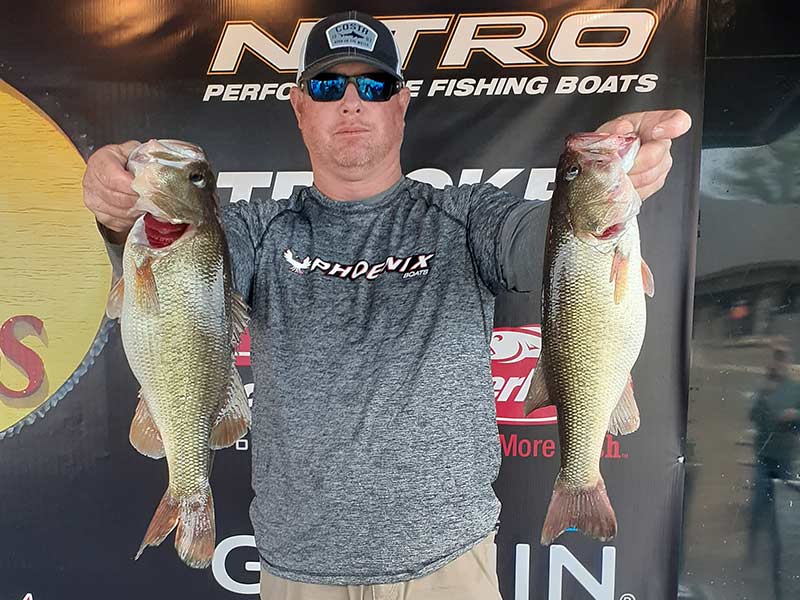 ATHENS, Ala. – Ryan Ingram won the 2019 Bass Pro Shops Fishing Tour National Championship on Lake Eufaula in Alabama this week with 54.35 pounds (just over an eighteen pound per day average).

“I caught basically all of my fish in 18-25 foot depths in the mid & upper areas of the lake. I mainly looked for isolated trees on a ledge, using a 1.5 oz Ledge Buster with a Gorilla blade attached. Most of my fish were caught early on each day,” Ingram explained. “The first day weather was not a big factor, as the biggest concern was the timing of trying to catch the fish while they transitioned between ledges and shallow beds.”

The National Championship event launched out of Lakepoint State Park in Eufaula, AL on Wednesday October 16th and concluded on Friday October 18th. The rain held off after the first day for the most part and allowed for some pretty fair-weather fishing for the majority of the event. This championship event was comprised of 321 anglers from across the country who qualified and competed in local regional divisions over the past year. Top prizes for the event included two (2) Triton 21TRX boats, one (1) Triton 19TRX boat, all of them outfitted with Mercury 4-Stroke outboard motors and select Garmin electronics, as well as a slew of cash and door prizes.

Ryan brought in a 5-fish limit bag of bass each day, with his largest weighed bass coming to 5.99 lbs on the scales. Ingram had the largest daily catch on day 1 at 21.68 lbs, and he was also the highest placing Angler of the Year from all divisions, winning one of the brand new Triton 21TRX boats (valued at $65,000) and a cash reward.

In second place overall was Scott Montgomery, locally from Eufaula, AL. Montgomery brought 15 fish to the scales throughout the event for a total placing weight of 50.16 lbs. Montgomery was averaging just approximately 14.8 lbs on the scales the first two days of the event but hammered it home on the final day with a 20.43 lb pound bag to secure the 2nd place spot overall. His largest bass of the event landed at 5.68 lbs. Montgomery earned the other Triton 21TRX boat for his high placed finish.

“I stayed down lake the whole time. I started out fishing anywhere from probably 25-30 foot, “Montgomery said. “I just ran until I found a natural tree and started to drop shot. The second day I had to come back up the lake to find my bites. I caught my fish using 6-8” finesse worm by Big Bite then switched to a 7” Suicide Shad swim bait. I was catching about 60 fish the first day, and closer to 20 the other days, but was getting limited actual bites. All I can say is that I tried!”

The third-place finisher for the event was Ethan Greene, a high school senior from Eufaula, AL. Greene also brought 15 fish to the scales during the event and, even with one dead fish penalty, totaled up a 47.87 lb weight for the event. He was also one of the youngest competitors in the event.

“I caught all of my bass this week using an 8” finesse worm made by Big Bite Baits. Most of my fishing was on ledges in 15 to 20 feet of water,” explained Greene. “It’s been a fun week.”

The fourth-place competitor for the week was Bradley Enfinger out of Colquitt, GA. Also bringing in 5 solid fish each day, his 15-fish catch landed at 45.67 lbs for the overall event. Enfinger’s largest bass weighed in at 5.53 lbs. His start on day 1 was lower than he anticipated but his day 2 weight of 17.84 lbs launched his rank upward into his fourth place total.

“I used a Ben Parker mini mag spoon while fishing in 15-20 foot range of water,” reported Enfinger. “My rod was an Impulse 7’11” heavy-moderate. I added a bigger feather hook to the spoon for some added appeal. I used that spoon because everyone else that I was sharing these ledges with were worming! I lost a few fish a day but that is to be expected with spoon fishing!”

Rounding out the top 5 finishers is Michael Smith from Andalusia, AL. Averaging just under 15 lbs per day, Smith brought up 15 fish during the event for a total weight of 44.58 lbs. Smith did not weigh a large bass but maintained consistent catches all week.

There was a secondary full-payout side pot for the largest bass caught during each of the three-day events. On day 1, Scott Sarff of Bloomington, MN caught a 6.83 lbs bass, while Donald Griffith from Robertsdale, AL caught his 6.19 lb bass on the second day. During the last day of the event, Andra Willis out of Raleigh, NC caught the biggest bass of the day at 6.24 lbs.

The awards banquet for the event was held at the Eufaula Community Center Friday evening following the final weigh-in. Further presentations and draw prizes were awarded, as well as the induction of two new members into the American Bass Anglers’ Hall of Fame. Tom O’Bryant from Cedar Grove, TN and Roger Gunsell from Derby, KS joined the prestigious ranks of the Hall of Fame this year. The top 5 finishers in the event from various service teams and groups were also announced, included the Army, Marine Corps, Navy, Air Force, Coast Guard, Department of Homeland Security, Lady Anglers, and Associate Anglers. As a final draw prize award, John Stevenson Sr. from Brooklyn Center, MN was the lucky recipient of the third boat, a Triton 19TRX (valued at $45,000).