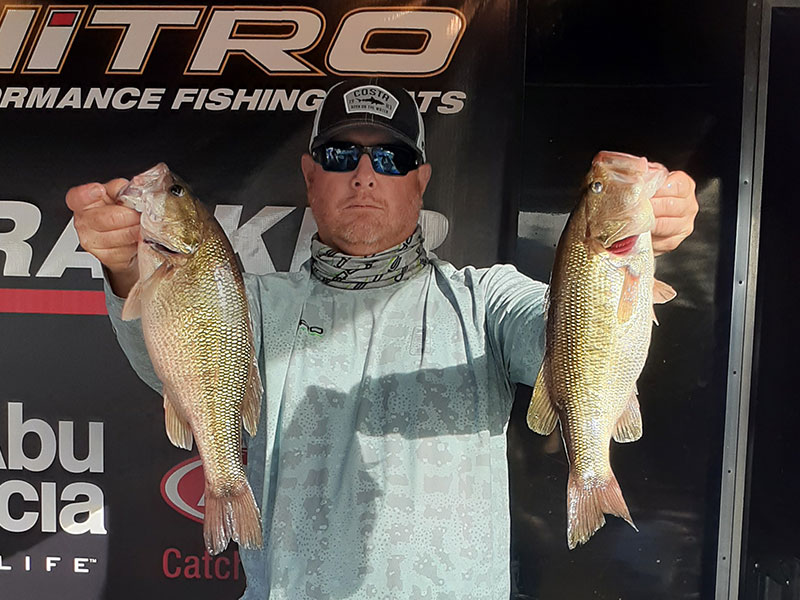 ATHENS, Ala. – Ryan Ingram of Phenix City, AL remained in the top spot with another solid day at the 2019 Bass Pro Shops Fishing Tour Championship on Lake Eufaula in Eufaula, AL. Ingram hauled in 15.47 lbs with another 5-fish limit bag today, bringing his current two-day total to 37.15 lbs. His largest bass overall was a 5.99 lb. Ryan is holding a 6-pound lead over Bradley Enfinger.

Bradley Enfinger out of Colquitt, GA. Enfinger moved up several places to second after bringing a limit of bass weighing in at 17.84 lbs. His current event total sits at 31.23 pounds going into day 3, with his largest bass so far weighing 5.53 lbs.

Remaining in third place is Michael Smith from Andalusia, AL with his current event total of 30.35 lbs. Smith brought up 14.77 lbs today to lock his place on the leaderboard after day 2, ensuring to remain as a top contender going into the final day tomorrow.

The overall top 50 after day two:

The largest bass caught overall on day one was brought in by Scott Sarff of Bloomington, MN at 6.83 lbs. On the second day, Donald Griffith of Robertsdale, AL hauled in a solid kicker at 6.19 lbs. The largest bass caught each day wins a substantial side-pocket payout regardless of finishing place in the event.

There are multiple competitions going on within this Championship. Big Bass for example could pay over $3,000 per day. The AOY Competition is ongoing, Service Team members are competing to make it into the top five nationally. There is a four-man team competition. Angler form four-man teams and put into a side pot and the top teams win cash. Also, after today’s competition the top five service team members will be recognized at the awards banquet.

Also, there will be a special drawing Friday evening for a Triton 19 TrX with a Mercury 150 XS Four Stroke Outboard Garmin Electronics, T-H Marine Hot Foot, Jackplate and accessories, and Optima Batteries.

The final weigh in starts at 2pm CST today and the weigh ins are being carried live on the American Bass Anglers Facebook page.