Starting Sunday October 13, 2019 more than 275 boats will begin practice on Lake Eufaula, AL for the Bass Pro Shops Fishing Tour Championship. The anglers will practice for three days and compete for three days with the first day of competition on Wednesday October 16 launching out of Lakepoint State Park and Marina.

How did these anglers qualify for this championship? First, it’s essential to know this championship is one of the oldest in the sport of bass fishing. Its origins come from the military as Military Bass Anglers (MBAA) organized in 1974. Anglers compete all over the country in over eighty divisions nationally to qualify. ABA Members earn points for each one-day event they compete in. No matter what Bass Pro Shops Fishing Tour divisional event they compete in they earn points. To level out the playing field, the anglers can fish as many one-day events as they wish but only their best four one-day finishes are counted toward their national standings.

Once the anglers have fished in a minimum of four one-day Bass Pro Shops Fishing Tour tournaments, they can compete in any two-day divisional championship. Their best two-day finish is added to their best four one-day finishes to give them a national point standing. This tradition also comes from those early Military Bass Anglers days where members that were in the military would travel a lot and still be able to fish local MBAA events and still earn points.

Today, this approach is great for the weekend angler, as a member of American Bass Anglers they can travel to any Bass Pro Shops Fishing Tour divisional event and compete. You can travel to your favorite lakes in the eastern US and you will find a local Bass Pro Shops Fishing Tour Division holding tournaments. Being a draw format, you can go as a boater or travel to these events as a non-boater and compete. It’s really great way for anglers starting out to learn how to tournament fish. To review, the national standings are based on member’s four best one-day tournament points plus their best divisional two-day championship points. The one-day events offer up to 200 points first place, two-day championships offer up to 400 points first place. The total best possible national points prior the Championship is 1,200 points.

Points are also tracked in each Bass Pro Shops Fishing Tour division useing the same approach that is used nationally. A member’s best four one-day events within a division and their points from that division’s two-day championship determine the angler’s divisional standings. This is very important as the division’s Angler of the Year is offered a special year-end opportunity. 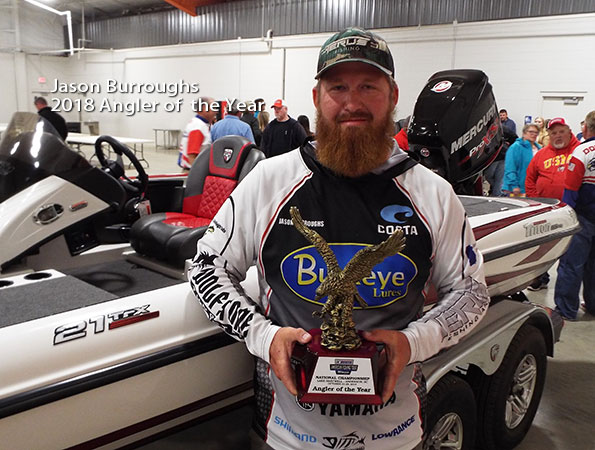 Each Divisional Angler of the Year is offered a boater slot at the Bass Pro Shops Fishing Tour Championship to compete for a Triton Bass 21 TrX completely rigged include a Mercury 200 XS Four Stroke Outboard and Garmin Electronics, T-H Marine Hot Foot, Jackplate and accessories, and Optima Batteries. At the end of three days of competition the highest finishing divisional Angler of the Year in the Championship will win this exclusive rig.

One of the cool things about the Bass Pro Shops Fishing Tour Championship is all the competitions going on within the tournament. The AOY Competition is ongoing, Service Team members are competing to make it into the top five nationally. The big bass pot is $10 per day per angler and that alone can swell to up to $5,000 per day. There is a four-man team competition that is held each year. Angler form four-man teams and put into a side pot and the top teams win cash!

The top 500 Bass Pro Shops Fishing Tour anglers from across the US will travel to Lake Eufaula for both bragging rights and the opportunity to win one of three prize boats, cash and draw prizes. The three Triton Bass Boats are powered by Mercury 4-Stroke Outboards and rigged with ABA sponsor products such as: MotorGuide Trolling Motor, T-H Marine Hot Foot and Jack Plate, Garmin Electronics and Optima Batteries.

Why does the practice period start on Sunday?

It allows the ABA members weekend travel time without taking additional vacation days.  This gives anglers Friday evening and all-day Saturday to travel into the host community and the event ends on Friday, allowing anglers two days, Saturday and Sunday, to return home.

The American Fishing Tour Championship is different than many other championships, there will be a special Awards Banquet on Friday evening following the event. This allows the anglers to go get a shower, pack up and enjoy a nice meal and an evening of relaxation before the weekend drive home. 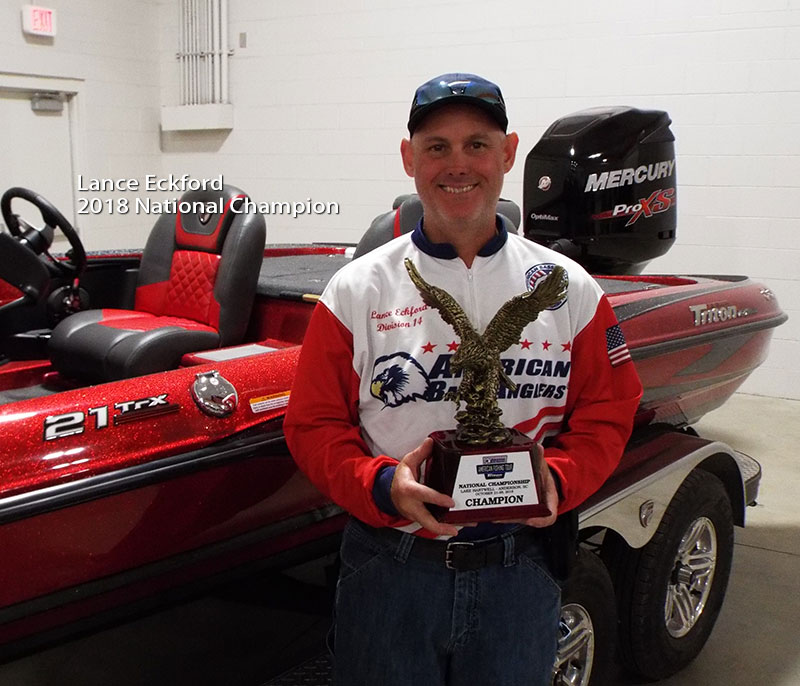 At the Championship Awards Banquet, the anglers and their guests enjoy a meal followed by the event awards presentations along with draw prizes and cash awards. ABA awards it’s highest honor with one or more ABA members being inducted into the American Bass Angler Hall of Fame.  You can read more about the Hall of Fame and its members on-line at www.drawtrail.com/HOF.php

Some ABA members have been fishing this Championship for over 30 years and would never miss it because of the top awards, draw prizes and spending time with old friends. Yes, it’s a competition but, it is also a time for lifelong friends to see each other and hang out for a week in the sport they love, bass fishing.

If you don’t have a Bass Pro Shops Fishing Tour division on your home lake, maybe you should look at getting one started. Just call (256)232-0406 we are always looking for leaders that can run tournaments for the weekend bass anglers and create a path to this championship.