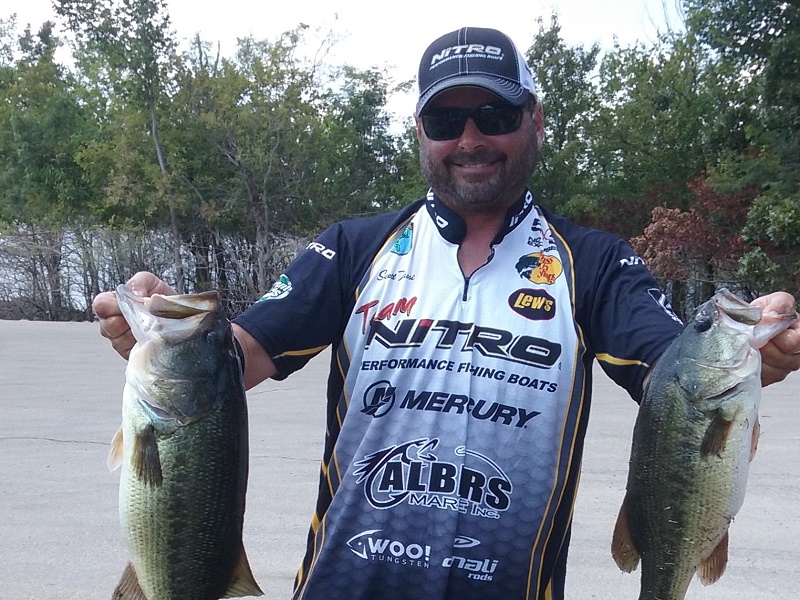 Awards were presented after the Sunday weigh-in including gift certificates to Albers Marine of Arma, Ken’s Kafe of Arcola and Moody Reel Cleaning Service of Girard, KS. Plaques were given to tournament winner, 2nd place, 3rd place and Big Bass as well as plaques for D126 Champion of the Year, D126 Angler of the Year and D126 Big Bass of the Year.

The weather was cloudy with light winds on Saturday and sunny with light winds on Sunday. The lake water level had dropped to only 7-8’ high from a record of 17-18’ high a couple of months age. Most anglers reported catching their fish with soft plastic, flipping the bushes. Some top water fish were also weighed in.

All of the 2-day tournament anglers are now qualified to fish the ABA National Championship scheduled for October 16-18 on Lake Eufaula, AL. Winner of the National Championship will win a fully rigged TR21. The highest finishing AOY at the Nationals will also win a fully rigged TR21. D126 has two anglers qualified for the AOY competition. They are Eric Craft And Justin Angel.

D126 will begin their 2020 season September 21, 2019 on Stockton Lake using Old State Park as launch site. Mark Moody and Becky Minor will be the directors for the 2020 season. The fall schedule will be posted on facebook and on the centralmidwestbass website.

D126 is one Division in the Bass Pro Shop Fishing Tour. There are 40 Divisions across the country. The circuit uses a draw format meaning anglers from age 14 can compete as boater or non-boater. Partners are drawn just before tournament take-off. Entry fee is $70 with a $10 Big Bass option pot. ABA membership is $35/year. Call Becky with any questions at 316 644-1454.