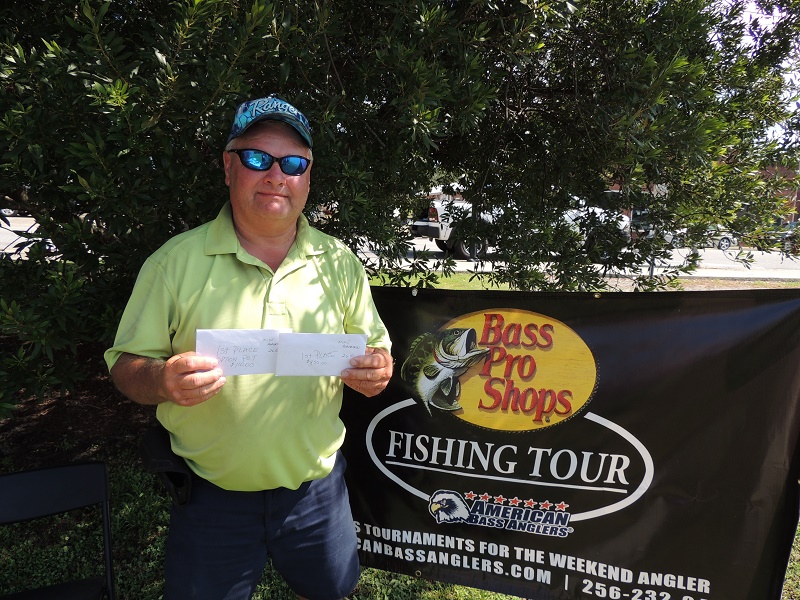 August 3rd and 4th, 2019, 13 anglers launched from Water Street ramp on the Roanoke River out of Plymouth, NC.  Day 1 was cloudy and rainy and day 2 was hot and humid.  After 2 days of fishing Mike Roberson from Battleboro, NC took the victory with 2 - 5 fish limits that weighed 26.10 lbs.  For the win Mike took home $850 in prize money.  Mike Roberson also accumulated the most points in Division 17 and earned the ANGLER OF THE YEAR title for the division.  Congratulations Mike.

Second amongst the competitors was Bobby Clark with 2 - 5 fish limits that locked in the scales at 24.16 lbs.  For his efforts, he took home $424 in prize money.  Bobby also had Day 1 big fish that weighed 4.34 lbs earning him the day 1 big fish pot.

The Day 2 and Biggest Bass of the tournament was caught by Scott McLamb.  His fish locked in the scales at 5.82 lbs earning him the day 2 big bass pot.  Scott also caught the biggest 5 fish limit of the tournament that weighed 18.94 lbs.

The next tournament in the Bass Pro Shops Fishing Tour, NC Central, Division 17 will be an early bird tournament for the 2020 season on Saturday 14 September 2019 launching from Water Street Landing on the Roanoke River in Plymouth, NC.