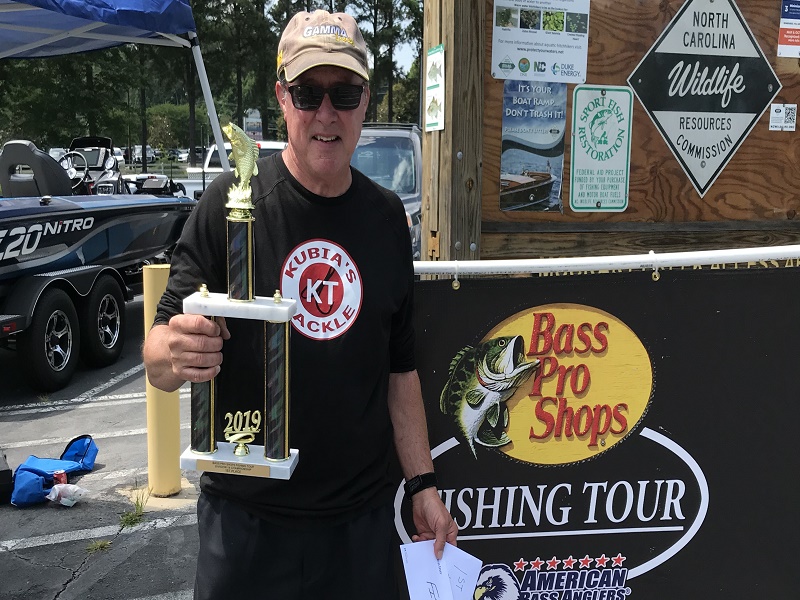 Garry Rogers’ primary weapons on days one and two where a whopper plopper and a jerk bait. He reported starting out fishing a square bill crank bait in muddy water to no avail, but once he got on the top water bite he was able to fill a limit pretty quickly. Garry started his day north of the HWY 150 bridge and progressed south toward McCrary Creek.  He reported fishing many of the same areas on day two, just in a different order.  Garry stated that he was very surprised that he was able to hold on to the lead.  He felt he had left the door open thinking he needed more weight to secure the win.

Second place was claimed by Lance Eckford with 10 fish over two days and a total weight of 18.08 lbs.  For his efforts, Lance took home $508.00 in prize money and earned Division Angler of the Year honors.

Lance Eckford fished top water early and a jig on docks later in the day both days. He fished the south end of the lake on day one and stayed near the ramp on day two fishing between Stumpy Creek and McCrary Creek.

William Sipe used a shakey head worm fished around the HWY 150 bridge to catch the majority of his fish.

The Biggest Bass of the tournament was caught by William Sipe.  He caught it up the river on a crank bait in muddy water on day two. His fish locked in the scales at 4.41 lbs. earning him $160.00.

The next tournament in this division will take place on TBD.