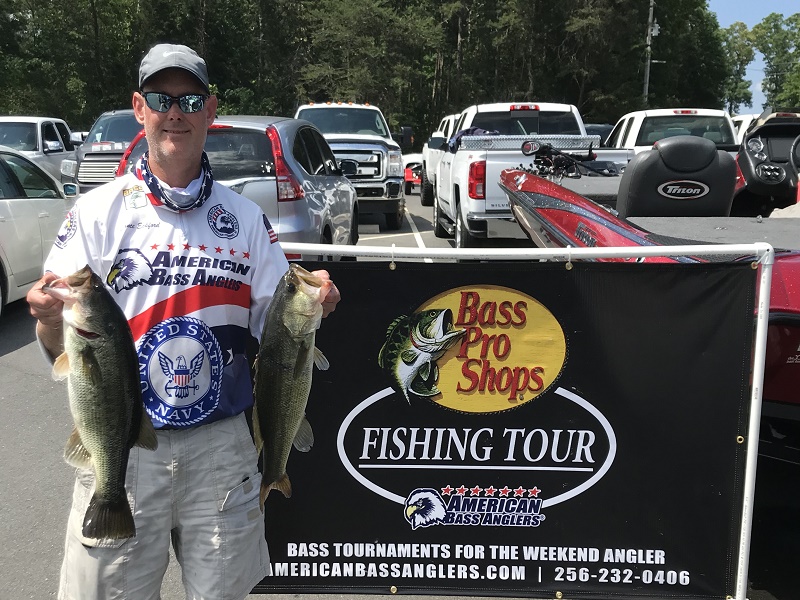 Lance caught one of his fish on a buzz bait early, then threw a 5 inch swim bait on a screw lock hook to catch the rest of his fish throughout the day.
Second place was claimed by Steve Sink with 5 fish and a total weight of 14.11 lbs.  For his efforts Steve took home $288.00 in prize money.

Steve caught his fish on texas rigged soft plastics on rocks and wood from 5 to 20 feet deep.

Don reported doing more of the same from the previous day on High Rock pitching Senkos, and straight tail worms.

The Biggest Bass of the tournament was caught by Steve Sink.  His fish locked in the scales at 5.21 lbs earning him $90.00.

The next tournament in this division will take place on June 15th, and 16th, 2019 launching from McCrary Creek Access on Lake Norman.
For more information on this event or division please contact local director Lance Eckford at (919)628-3383 or visit www.americanbassanglers.com

These anglers earn valuable points toward the divisional angler of the year title. The points champion from each division will compete in the annual American Bass Anglers AFT Angler of The Year Final Round at the Bass Pro Shops Fishing Tour Championship. In addition, the top 500 anglers from the various divisions will earn the right to compete in the three-day ABA, Bass Pro Shops National Championship tournament.