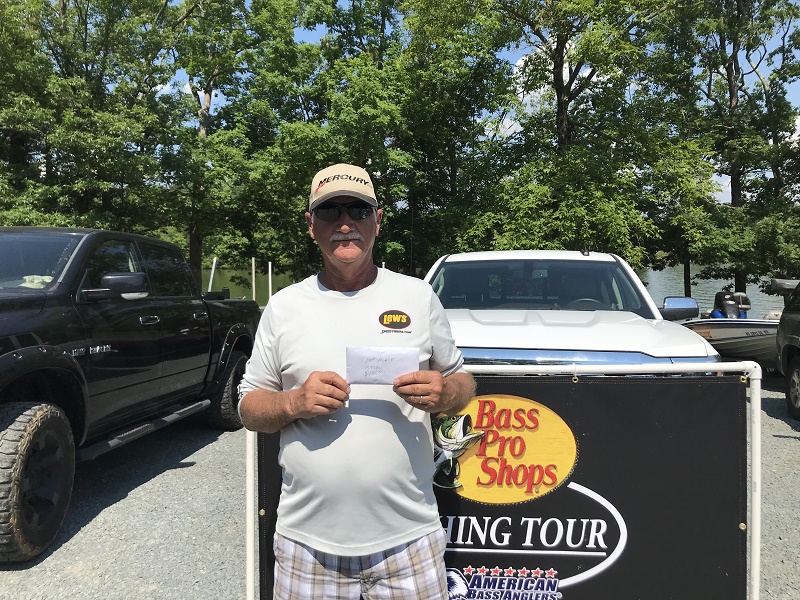 Don Sprinkle of Lexington, NC won the Bass Pro Shops Fishing Tour Divison 14 tournament presented by American Bass Anglers.  Running out of Southmont ramp near Lexington, NC.   Don Sprinkle brought back five fish that locked in the scales at 13.82 pounds anchored by a 4.54-pound kicker.  For the victory, Don Sprinkle took home a check for $432.00.

Don reported that the bite was very slow for him.  His fish came on Senkos and Trick worms in 5 ft. of water or less around docks and wood.  He tried fishing some offshore structure but was unable to get any bites doing that.

Second place was claimed by Richard Bradford with 5 fish and a total weight of 13.17 lbs.  For his efforts, Rick took home $223.00 in prize money.

Matt caught his fish shallow on rip rap banks with a Riot Baits Minima jig and flipping bushes with a beaver style bait.

The Biggest Bass of the tournament was caught by James Barber on a spinnerbait.  His fish locked in the scales at 5.25 lbs earning him $70.00.

The next tournament in this division will take place on June 15th, and 16th, 2019 launching from McCrary Creek Access on Lake Norman.
For more information on this event or division please contact local director Lance Eckford at (919)628-3383 or visit www.americanbassanglers.com

These anglers earn valuable points toward the divisional angler of the year title. The points champion from each division will compete in the annual American Bass Anglers AFT Angler of The Year Final Round at the Bass Pro Shops Fishing Tour Championship. In addition, the top 500 anglers from the various divisions will earn the right to compete in the three-day ABA, Bass Pro Shops National Championship tournament.