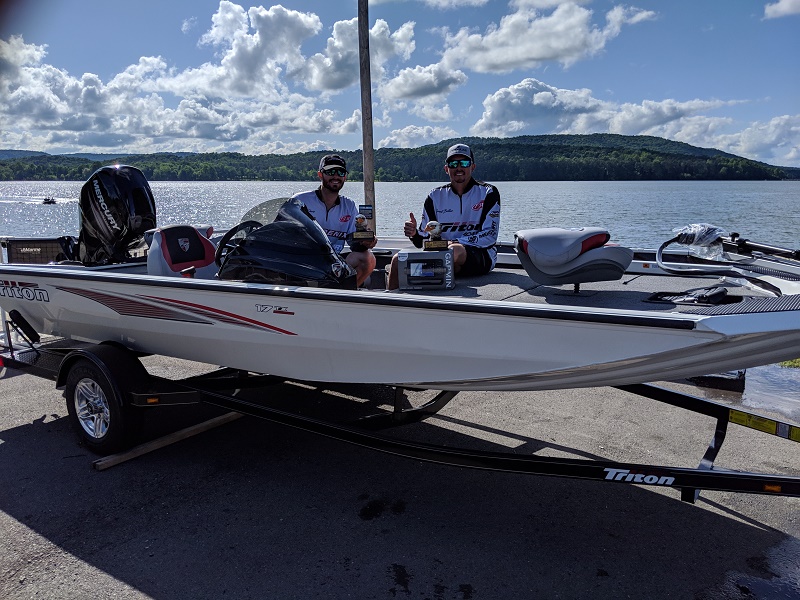 Sunday, May 5th, 2019 the ABA Triton 100% Plus Team Tour held its second tournament of the regular season that launched from Goosepond Bait and Tackle on Lake Guntersville located in Scottsboro, AL. Eighty-three teams went head to head, on a sunny but windy day, to try and win the 2019 Triton 17TX powered by a 60HP Mercury four-stroke with Garmin Echo-map plus 93SV valued at 20K. With a massive six-and-a-half-pound lead over 2nd place, Seth Davis and Brent Butler took the victory weighing in 5 fish for a whopping weight of 29.69 pounds.

"We caught our fish offshore, ledge fishing. We were fishing about 10 feet deep. We caught them on a jig and a deep diving crankbait. We wanted to thank Wieda's Marine and Mercury Outboards." said Davis and Butler.

Second place team Derek Remitz and Casey Martin brought 5-fish to the scales weighing 23.19 pounds.  They earned a check for $2500 for their catch.

“We were ledge fishing in about 8 to 10 feet of water. We were using swimbaits and jigs to reel them in. We were fishing mid lake and had great morning but as the day went on it seemed to slow down,” said Remitz and Martin.

Coming in 3rd place was the team of Brandon Craft and Shane Howington bringing 5-fish to the scales weighing 22.01 pounds.  They earned a check for $1700 for their 5 bass.

"We caught them on a Carolina Rig and a Shaky Head. We caught our bass in about ten to fifteen feet of water. We were fishing down the river. We missed a few but never got a chance to see them so we are not sure if we could have gotten that little bit of weight." said Craft and Howington.

John Rice and Paul Arnold they caught the biggest bass of the day at a massive 7.10 lbs. They had a 16.08-pound bag with 5 fish and had this beauty in the bag. They weighed in at the end of the day and surprised us. They walked away with a check for $800 for that big bass.

"We caught the big one on a Shaky-Head. We caught him down the river in about 15 feet of water." Said Rice and Arnold.