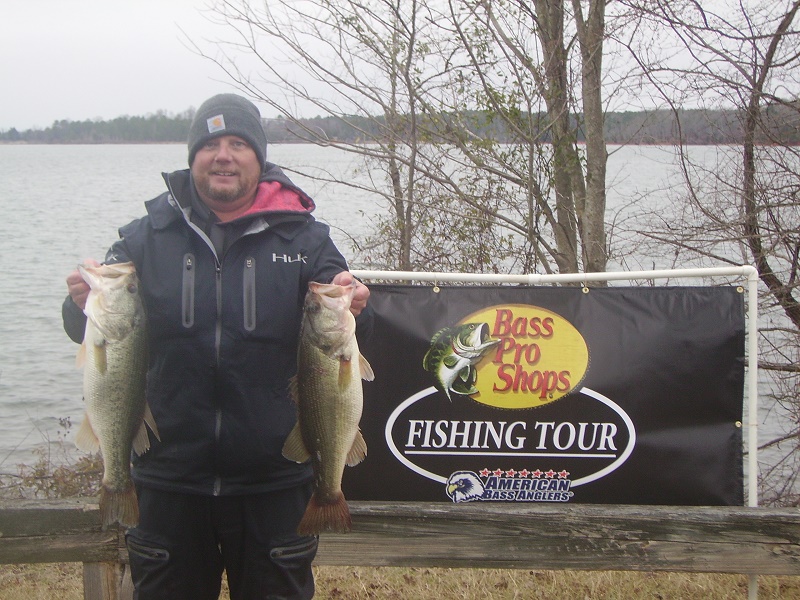 February 10th, 2019   Elberton, GA.  Twenty-two anglers launched from the Elberton boat ramp near Elberton, GA.  The temps started out in the low 40’s and only warmed a degree or so by the 3 pm weigh-in time. Water temps were in the low 50’s due to several prior days of temps in the mid-’70s before the tournament. Sixteen of the twenty-two anglers caught a five-fish limit, but when the scales closed it was Nolan Pulley of Simpsonville, SC who took the victory with a whopping 18.74lbs. For the win, Nolan took home $559 for 1st Place + $114 for 1st Place Option Pot + $105 for Big Fish for a total of $778 in prize money.

Second amongst the competitors was Darren Ashley of Calhoun Falls, SC with five fish that locked in the scales at 14.10lbs. For his efforts, he took home $331 plus $76 for 2nd Place Option Pot for a total of $407 in prize money.

Third place was claimed by Stephen Hayes of Simpsonville, SC with five fish and a total weight of 13.87lbs.  For his efforts, he took home $108.

Fourth place was Marcus Allen of Anderson, SC with a limit weighing in at 12.18lbs. Marcus took home $79 for his efforts.

The Biggest Bass of the tournament was caught by Nolan Pulley of Simpsonville, SC.  His fish locked in the scales at 5.41lbs earning him $105 in prize money.

The next tournament in this division will take place on March 3rdth, 2019 launching from the Dorn Facility on Clarks Hill Lake.
For more information on this event or division please contact local director Grover Jones at (252)-217-2893 or visit www.americanbassanglers.com