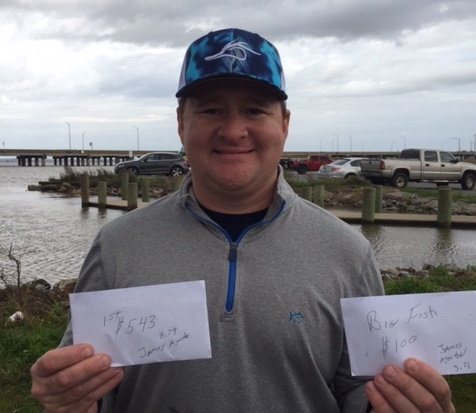 January 12, 2019 - Mobile, AL.  Twenty anglers launched from the Causeway near Mobile, AL due but when the scales closed James Agerton from Saraland, AL took the victory with five-fish weighing in at 8.79-pounds.  For the win, Agerton took home $543 in prize money.

Second amongst the competitors was Dennis Prickett with five-fish that locked in the scales at 6.87-pounds. For his efforts, he took home $329 in prize money.

Third place was claimed by Michael Hardin with three-fish and a total weight of 6.00-pounds.  For his efforts, he took home $108.

The Biggest Bass of the tournament was caught by James Agerton.  His fish locked in the scales at 3.21-pounds earning him $100 in prize money.

The launch site was changed from Live Oak Landing near Stockton to the Causeway due to river flooding.  Flooding made the fishing conditions difficult.

The next tournament in this division will take place on February 23, 2019.