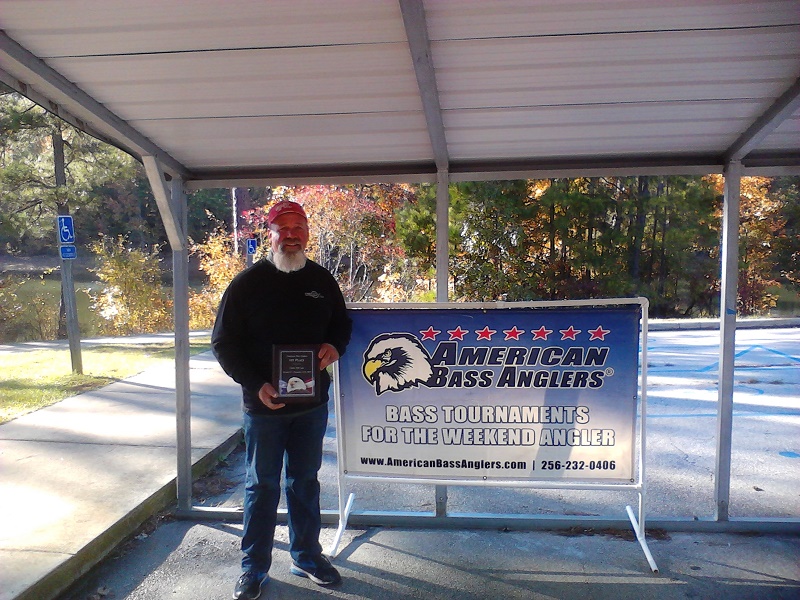 On November 11th, 2018  twenty-nine anglers launched from the Dorn Facility Landing near McCormick, SC.  The temps started out around 33 degrees and warmed up into the low 60’s by the 3 pm weigh in time. Water temps were in the mid 60’s due to several cold rains before the tournament. All twenty-nine weighed in at least one fish. Nineteen of those anglers brought back five-fish limits to the scales, but when the scales closed it was Tim Weredyk from Guyton, GA who took the victory with 12.87-lbs. For the win, Tim took home $666 in prize money plus an additional $156 for 1st Place Option Pot for total earnings of $822.

Second amongst the competitors was Jason Turner of Anderson, SC with five-fish that locked in the scales at 12.02-lbs. Jason reported catching his fish shallow on a variety of baits. For his efforts, he took home $414 plus $104 for 2nd Place Option Pot for a total of $518 in prize money.

Third place was claimed by Kim Neal of Easley, SC with five-fish and a total weight of 11.81-lbs.  Kim credited the shakey head rig for his limit. For his efforts, he took home $147.

Fourth place was new ABA member Wesley Sandifer of Chapin, SC with a limit weighing in at 11.29-lbs. Wesley took home $115 for his efforts.

Rounding out the last money spot was Russell Clark of Abbeville, SC with a five-fish limit weighing in at 10.94-lbs. Russell reported losing a 5-lber at the boat that would have made a huge difference for him. Russell collected $79 for his fifth-place finish.

The Biggest Bass of the tournament was caught by Robert Majerick of Eden, NC.  His fish locked in the scales at 4.16-lbs earning him $140 in prize money.

The next tournament in this division will take place on December 9th, 2018 launching from Green Pond Facility on Lake Hartwell.

For more information on this event or division please contact local director Grover Jones at (252)217-2893 or visit www.americanbassanglers.com