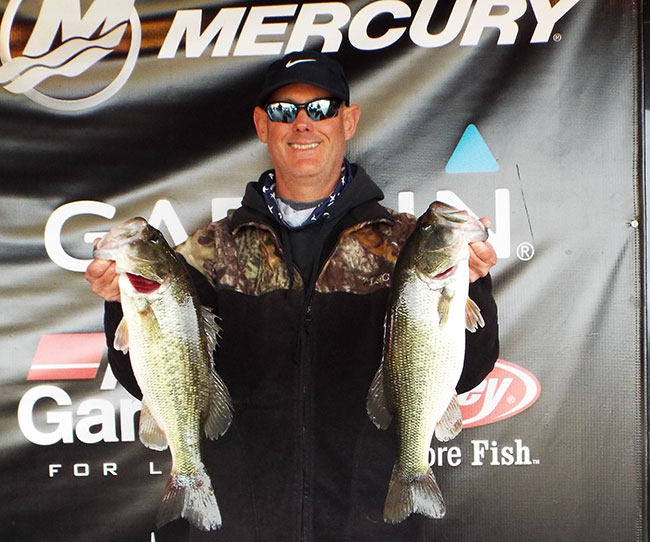 ATHENS, Ala. –  The 2018 American Bass Anglers' American Fishing Tour National Championship on Lake Hartwell near Anderson & Greenville, SC ended the second day of fishing on October 25th. The skies remained clear with a cold front coming through during the day that changed the tide for several of the competition's anglers.

Lance Eckford of Troutman, NC only brought in 8.22 pounds on day 1 but turned it around with a massive catch of 18.70 pounds with a 5-fish limit today. Eckford immediately jumped from 45th place all the way up to 1st place due to his effort on the water today that gave him a current total of 26.92 pounds. He did not have any exceptionally large bass but had a solid bag overall to give him a great advantage going into the final day.

“I caught my fish shallow on the south end of the lake,” Eckford reported. “I had zero fish until 9:30am then caught 8 keepers by 12:30. Then I went practicing to try to find more areas similar to where I caught my fish.”

For the second day, Russell Clark from Abbeville, SC ends the day landing in second place in the competition. Clark caught another 5 fish for today's total of 12.72 pounds, obtaining an overall total of 25.18 pounds.

“Today was much tougher than yesterday out there on the water,” Clark stated. “I had a limit by 9am yesterday, but it took me until around 2pm to get my first limit of fish. After 2pm I decided to start fishing shallow and caught most of my day's fish that way. I stayed in the middle of the lake most of the day.”

Coming in third place for the day is angler Jason Burroughs from Hodges, SC, who was in the lead after the first day. Burroughs also caught another 5 pounds today weighing 11.45 pounds. After today's catch, he has an event total weight sitting at 24.73 pounds and is the top angler among all Anglers of the Year from all divisions nationwide. Burroughs will look to maintain that top AOY spot on the final day.

“I continued to fish shallow but had a real tough day. I only managed to catch about 15 keepers all day which were all rather small in size. With only 20 minutes left before checking in, I picked up my frog for the first time and caught a 5-pounder that saved me from having a pretty bad day,” explained Burroughs.

The current top 10 competitors on day 2 are rounded out by the following anglers: 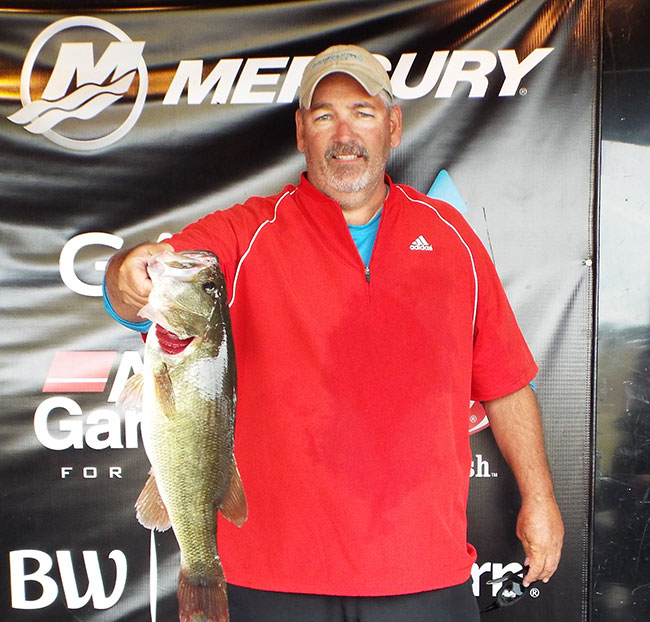 The largest bass of the second day was caught by Joe Schonhoff from Slidell, LA. His current event total is 13.18 pounds, and his big bass today weight a whopping 5.56 pounds.

Multiple prizes are up for grabs as the result of this Championship Event. Three Triton TRX boats will be given to the overall winning boater, non-boater, and top Angler of the Year from all divisions. An additional 100% side pot is also available for the biggest bass caught each day, set at a daily $2,750!

The field of championship anglers launched out from Green Pond Landing in Anderson, SC at 7:25am on October 25th for day two of the competition and began checking in for weigh-in at 3pm EST. Look forward to an interesting final day of fishing competition on Lake Hartwell on October 26h. Final weigh-in will begin at 2pm EST.