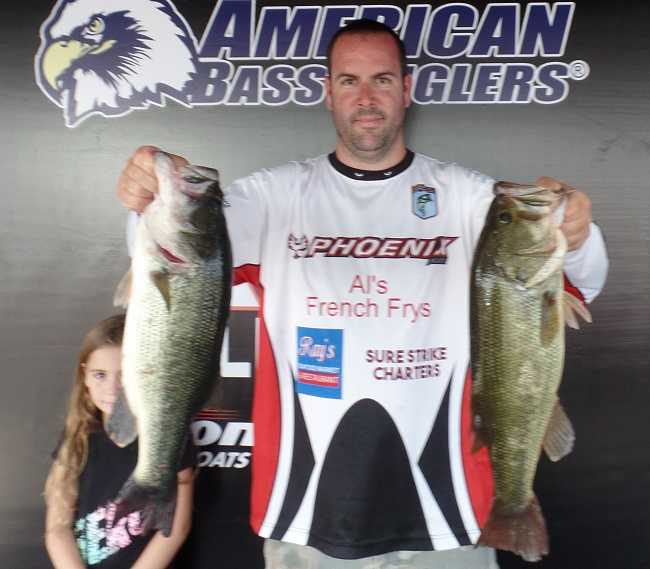 Running out of Dock Street Marina in Plattsburgh, Ny. The Hinesburg, VT angler caught five-bass weighing 20.31 pounds. He anchored his bag with a 4.50-pound kicker. For the Boater Division victory, Labelle took home a check for $5000.

“I fished Mississquoi with a dropshot using a Roboworm in morning dawn,” Labelle said.

In second for the boaters, Tylor Lahue from South Burlington, VT  landed a five-bass tournament limit going 19.43 pounds with a 4.30-pound kicker. He collected $500 for the effort.

“I fished the north end of the lake. It was all Keitechs and dropshot today for sure, the color was green pumpkin and alewife, we were fishing in 15-25 ft,” Lahue said.

Brad Brodnicki from Amherst, NY took third for the boaters with five-bass going 18.11 pounds. He anchored his catch with a 4.21-pound kicker to earn $300.

The biggest bass for the boaters was caught by Zachariah Dunham of Stroudsburg, PA that weighed 5.58-lbs and Zach pocketed $310. 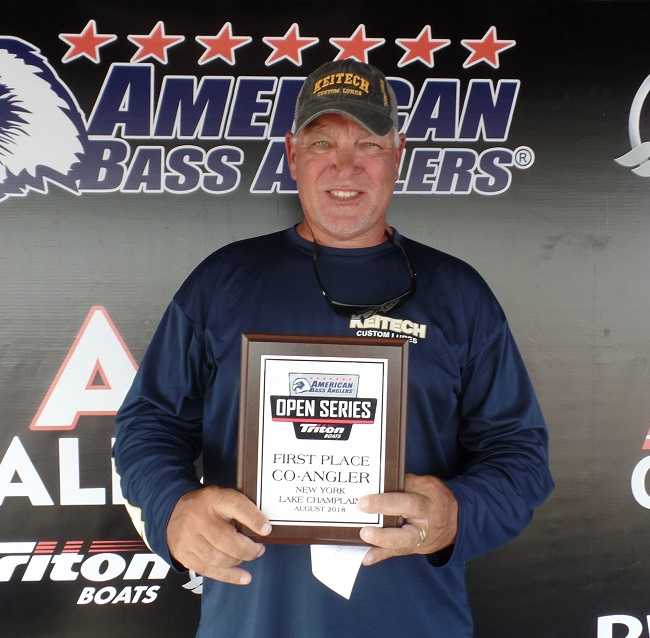 In the Co-Angler Division, Mike Czaplinski of Branchville, NJ won with three-bass going 11.05 pounds. To pocket a check for $900.

“I was fishing with a Keitech 3.8 oz swim bait alewife with 3/8 oz head off points then went to a sexy impact ½ oz dropshot with an 18” leader dragging it along a shelf. We were fishing on the main lake,” Mike said.

Taking second for the co-anglers, Mark Bilodeau from Burlington, VT brought in a three-bass division limit weighing 10.60 pounds including a 4.01-pound kicker. He collected $400 for the effort.

“I was fishing a dropshot in 12-15 ft using a mini xzone slammer in purple and gold. We ran all over the place,” Bilodeau said.

Kyle Laporte from West Chazy, NY placed third among the co-anglers with three-bass going 10.35 pounds. He anchored his catch with a 4.28-pound kicker to earn $300.

“I was fishing a peanut butter and jelly ned rig in 15 ft of water, we were fishing for smallies up north,” Laporte said.

In fourth place among the co-anglers, Sudhir Nath of Cheektowaga, NY brought in three-bass for 9.92 pounds including a 3.54-pound kicker. Julius Salley from Poughkeepsie, NY finished in fifth place with three-bass at 9.82 pounds topped by a 3.69-pound kicker.

The biggest bass for the co-anglers was caught by: Kyle Laporte from West Chazy NY that weighed 4.28 and Kyle pocketed $135.

Slated for September 29 and 30, the two-day championship tournament will be held on Lake Chautuaqua out of Mayville Park in Mayville, NY. At the end of the season, the best anglers from across the nation advance the 2018 Ray Scott Championship, slated for the first week of April 2019 on Lake Eufaula, AL.