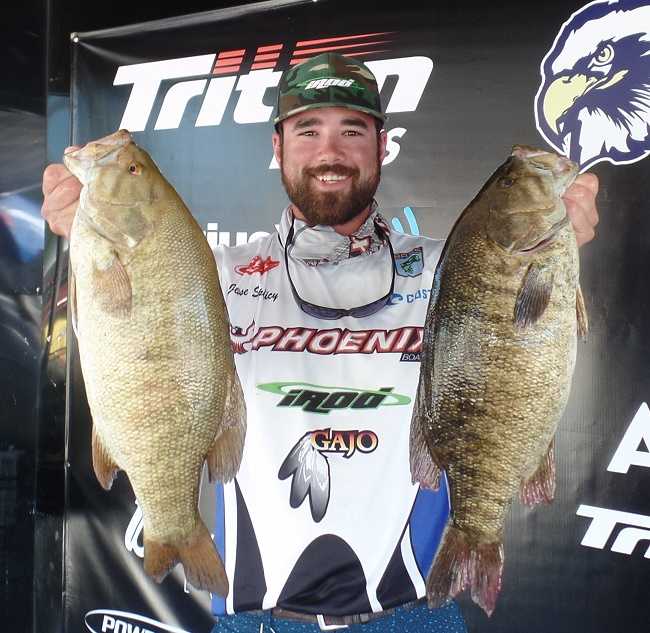 “I was drop shotting with a GaJo spirit shad, any of the natural colors were working, in the river in 25-35 feet of water. “  Spellicy said.

In second for the boaters, Christophe Ullrich of Picture Rocks, PA landed a five-bass tournament limit going 22.78-pounds with a 5.29-pound kicker. He collected $1250. for the effort.

“I fished the river in the Canadian narrows between two islands. I was fishing current in 10-25 ft of water, I used a green pumpkin ned bait all day,” Ullrich said.

Brian Bylotas of Scott Township, PA took third for the boaters with five bass going 21.43-pounds. He anchored his catch with a 5.27-pound kicker to earn $900.

“I went to the lake in the morning and ended up coming up the river. I was drop shotting in 20-30 ft of water using a Berkley Power fry in green pumpkin,” Bylotas said.

Finishing fourth, Jonathan Robla of Norwood, NY landed a five-bass limit for 21.67-pounds including a 4.44-pound kicker. Henry Fristik of Chester, MA rounded out the top five boaters with five bass at 19.92-pounds topped by a 4.07-pound kicker.

The biggest bass for the boaters was caught by Dennis Carnahan of Cazenovia, NY that weighed 6.86-pounds and Dennis pocketed $660.

In the Co-Angler Division, John Brzozowski of Dallas, PA won with three-bass going 13.49 pounds. He sealed his victory with a 5.73-pound kicker to pocket a check for $1200..

Taking second for the co-anglers, Michael Orris of Harrisburg, PA brought in a three-bass division limit weighing 12.93-pounds including a 4.73-pound kicker. He collected $500 for the effort.

“I was drop shotting in 10-30 ft of water in the river using a blackish brown 4 inch worm,” Orris said.

Chris Sullivan Voorheesville, NY placed third among the co-anglers with three-bass going 12.59-pounds. He anchored his catch with a 4.99-pound kicker to earn $350.

In fourth place among the co-anglers, James Perez Jr of Rensselear, NY brought in three-bass for 12.25-pounds including a 4.51-pound kicker. John M. Ciavaglia of Pittsford, NY finished in fifth place with three-bass at 10.87-pounds topped by a 4.08-pound kicker.

The biggest bass for the co-anglers was caught by John J. Brzozowski of Dallas, PA that weighed 5.73 and John pocketed $200.

Slated for August 17, 2018 the next divisional tournament will be held on Lake Champlain out of Dock Street Landing, in Plattsburgh, NY.

At the end of the season, the best anglers from across the nation advance the 2018 Ray Scott Championship, slated for the first week of April 2019 on Lake Eufaula, AL.