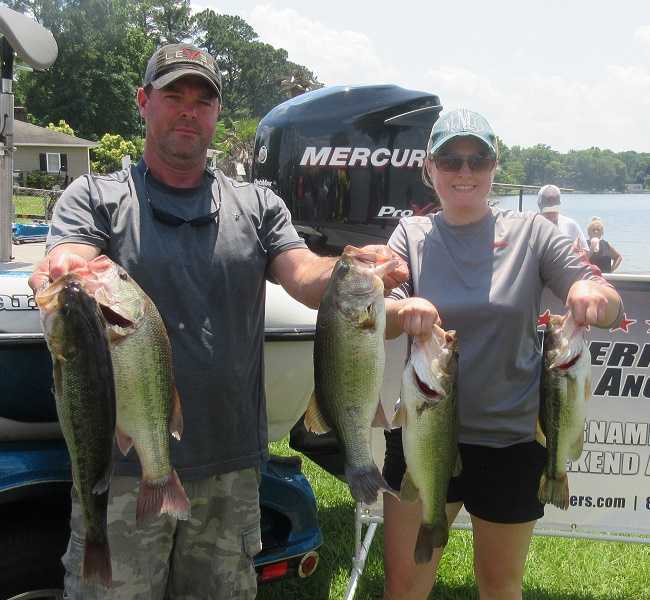 Saturday, June 9, proved a challenging day as 30 teams showed up for South Carolina’s Couples Tournament on Greenwood.  A calm 70-degree morning led to a hot and humid afternoon.  But these summer conditions did not deter Michelle and Joey Miller.  They handily won the event with a solid 5-fish limit weighing 17 pounds.  Their success came fishing deeper brush with a “big” worm.

Tricia and Bill Cain claimed fourth place with a limit at 12.4 pounds.  Buzzbaits early in the day were key to their success.

Samantha Tellock and Jason Burroughs took fifth place with 12.2 pounds.  A topwater Pop-R put their limit in the boat.

Sixth place was captured by Ashley and Ben Sutton.  They only had four fish, but they were all hefty, weighing a total of 12 pounds.  Their fish came “all day” using buzzbaits.  Ben’s 5-pounder took tournament and Men’s Big Bass.

Missy and Tom Bancroft got a $50 gift card from Angler’s Headquarters for “just-out-of-the-money” in seventh place.  They weighed 11.6 pounds in 4 fish.

Donna Branstetter got the Lady’s Big Bass with an awesome 4.3-pounder.  This fish was caught using a drop-shot.

End-of-Year awards were also presented at this event.  Special thanks to Lake Greenwood’s Harris Landing restaurant for their hospitality.  Their timely service and the air conditioning was much appreciated.  Thanks also to the One Stop Marina for opening early in the morning for “biscuits” and restroom availability. 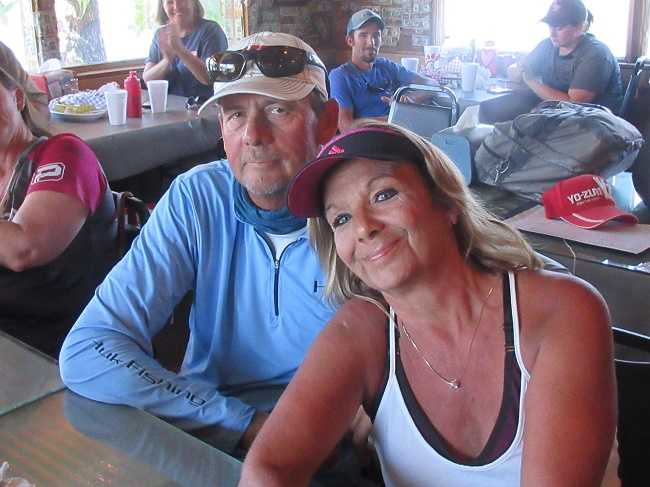 Victoria and Dale Goff are the 2018 South Carolina Anglers of the Year.  They had a truly outstanding year, finishing “in-the-money” in all 5 of the March-June tournaments.  They were presented the traditional division AOY crystal.  Victoria and Dale are also in great position in the national standings going into September’s Couples Championship.

Candace Veal won “2018 Lady’s Big Bass” for her 4.5-pounder weighed in on Lake Keowee in April.  Scotty Bartley won “2018 Men’s Big Bass” with his Lake Murray 6.8 pounder in March.  Candace receives a Lew’s baitcasting reel coupled with an ALX rod for her accomplishment.  Scotty gets a Kissel Krafts Custom Rod with his Lews reel.  Lews, Kissel Krafts and ALX are much appreciated for their generosity.  Their sponsorships add a great dimension to the South Carolina Couples fellowship and competition.

Other 2018 year-end recognitions were presented with drawing prizes.  These included 1) fishing the entire season with “no cash” and 2) smallest sack weighed.  There was also recognition and drawing prizes for those teams fishing 4 or more tournaments.

Some interesting statistics for South Carolina’s 2018 season:
- 66 teams participated in at least one tournament
- 25 new teams joined the division
- 23 different teams finished “in the money”
- 38 teams qualified for the National Championship (3 or more events)
- A record 44 teams participated in the March Lake Murray event

Thanks, again, to the many local sponsors of the South Carolina Couples.  Strickland Marine contributed 15 gallon bottles of Mercury Oil over the season.  Yo-Zuri lure gift packs have been highly valued is each of the tournament drawings.  Phantom Outdoors provided top-notch clothing for drawings in each of the 2018 tournaments.  Weeble Lures jigs and shirts have been excellent.  Elta MD’s sunscreen (offered through Greenville’s Doctor Carolina Price) has been a hit.  The Jervey Eye Group lens/electronics-screen cleaner continues to be valued.  Hallmark gifts (through Tammy Wicker) improved several gift packs over the season.  And, Anglers Headquarters provided gift certificates in several events.  These contributions made it possible to significantly expand the number of folks that went home as a “winner.”