Lawson Takes Round 3 at Sam Rayburn 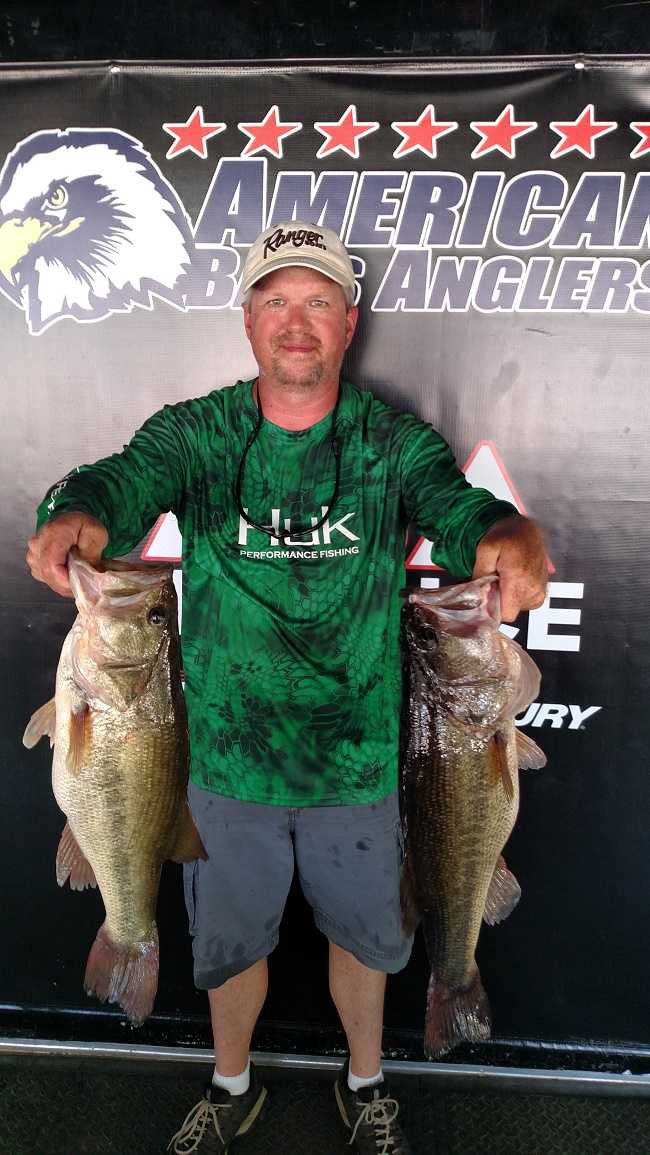 ATHENS, Ala. – Jason Lawson of Corrigan, TX won the American Bass Anglers Open Series Texas East Division, held June 9th at Sam Rayburn. Running from the Umphrey Pavilion near Brookeland, TX, the field of 71 boats and 66 co-anglers left at 5:45 AM with calm and still waters. For the boaters, 14 places took home a check with 13 co-anglers taking home earnings as well. The direct sun with little wind overall added extra heat to the day, but the anglers managed to bring through some quality fish to the scales.

Jason Lawson took the top prize home for the boater side with five fish weighing in at a total of 24.11 lbs, held down with a 5.96-pound anchor. With just over two pounds separating him from the runner-up, Lawson managed to take home the check for $5000.

“I have been here for a couple days, and Wednesday I had about 25 lbs while I was pre-fishing, didn’t touch those fish the rest of the week, went back to them this morning and never got a bite. Around 10:00 with nothing in the boat I went to a spot where I knew a big laydown was and caught the 6 lber first and managed to fill the box with good keepers.  I wasn’t expecting to catch what I did, where I did, but I’m very pleased with the outcome.” Said Jason.

In second for the boaters was Nick LeBrun out of Bossier City, LA. Nick brought a solid bag of five fish to weigh-in, settling in at 22.01 lbs. Sitting comfortably in second place, he took home a check earning him $1400 for the day.

“I haven’t been here in about 3 months so I ran some ledges I had fished before.  They were deep ledges and I didn’t get very many bites but the ones I did get were decent fish.  I only culled a couple of times but all of them came on a big jig.  I put together a good bag and for not being here in a while, I am happy with the outcome,” said Nick.

Rounding out third place was Ron Risenhoover from Lufkin, TX. Ron totaled 20.99 pounds with his five fish, including a kicker at 5.59 pounds. He earned a check for $950 for his day’s catch.

“I left out at the back of the pack this morning so I ran my Kick’n Bass Nitro to my secondary spots.  I had a few keepers early, then moved to my deeper spots.  My co-angler got his limit pretty quick.  I caught one good fish at each spot we hit using a Natural Forage 10” worm in a custom Rayburn Plum/Redbug color, with Java Kick’n Bass fish attractant.  They were really picky, and not aggressive so the Kick’n Bass was crucial to the good bites.  I want to thank RodArmorz, Steve Wright Mortgage, Natural Forage Baits, Nitro Boats, and Kick’n Bass fish attractants,” said Risenhoover.

In fourth, Justin Royal from Bridge City, TX weighed in five fish totaling 19.20 pounds for a $650 check. In fifth was Albert Collins from Nacogdoches, TX who brought in five fish at 18.53 pounds, earning him a check for $550.

The largest fish for the boaters was caught by James Davis, who landed in 12th place for the day. His largest bass weighed 6.82 pounds, earning him an extra winnings of $680. 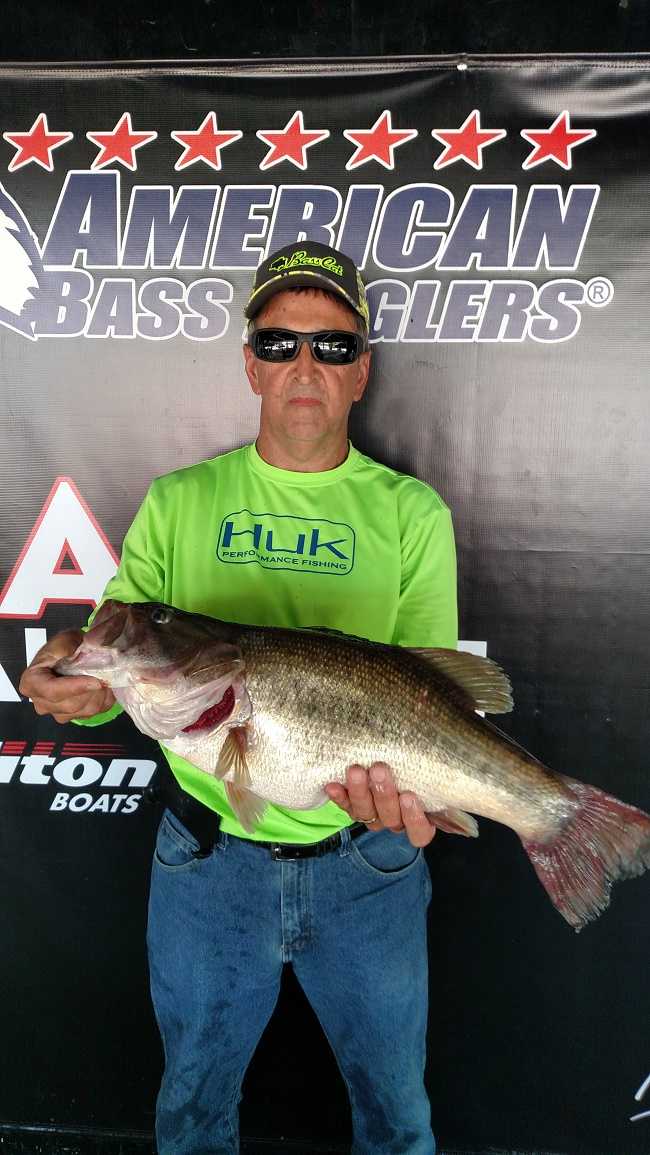 For the Co-angler side of the house, Jeff Cox from Walker, LA took the lead with a three fish bag totaling 15.21 pounds. His winning catch sent him home with a check for $1800. Jeff’s kicker was also the overall biggest bass of the event, weighing 8.88 pounds, which earned him a second check of $330 and since he caught that fish with an ABU Garcia reel he was awarded and brand new ABU Garcia Revo X.

“What a day.  My boater was on a deep bite.  We started deep and stayed there all day.  We caught all of our fish on a big worm in 20-25 ft of water.  We were casting to a ridge and dragging it off a ledge toward the boat, and most of our bites were coming almost straight under us.  I culled 5 or 6 times today.  I had a couple good ones in the livewell and one that was just over 14 inches and I culled the 14 incher with the 8 lber.  I dropped the line straight down below us instead of casting and was jigging it off the bottom when she bit.  She put up a real good fight but I won it and put her in the boat.  I had a real good day on the water and a lot of fun today.” Said Jeff.

Taking second for the co-anglers is Mason McGill from Nederland, TX. Mason brought another strong bag of three fish to the scales with a weight of 14.37. His bag was anchored with a 5.32-pound bass that kept him in the lead most of the day. Mason took home a $650 check for his winnings.

“We stayed on a deep bite today.  Crankbaits is all we could get them on so we stayed with it and the plan worked.  I caught 5 fish today and they were all keepers, so I managed to cull a couple times.  I knew I had a good chance to win but this is Rayburn and you never know where you will place, even with 3 fish for 14 lbs.” Said Mason.

Landing in third for the co-anglers is Dustin Blackout of Canton, TX, bringing another three fish bag to the scales. Totaling 12.33 pounds, Dustin held down his weight with a larger bass at 4.77 pounds. He collected a check of $450 for the day.

“This was my first time fishing with you guys and I am excited to say it was awesome.  We flipped ditches in about 2-3 ft of water today.  We stayed shallow because we were catching fish and I managed my limit.  I culled once and had a great time. I know I will be coming back.” Said Dustin.

In fourth place among the co-anglers, Jordan Preuett from Sibley, LA weighed in with 12.08 pounds for a check of $350. In fifth place was Judah Morris of Forrest Hill, LA brought a weight of 10.81 pounds for a $275 check.

Slated for Sept. 15th, the final divisional tournament will be held again on Sam Rayburn launching from the Umphrey Pavilion.  At the end of the season, the best anglers from across the nation advance to the 2019 Ray Scott Championship, slated for the first week of April 2019 on Lake Eufaula, AL.