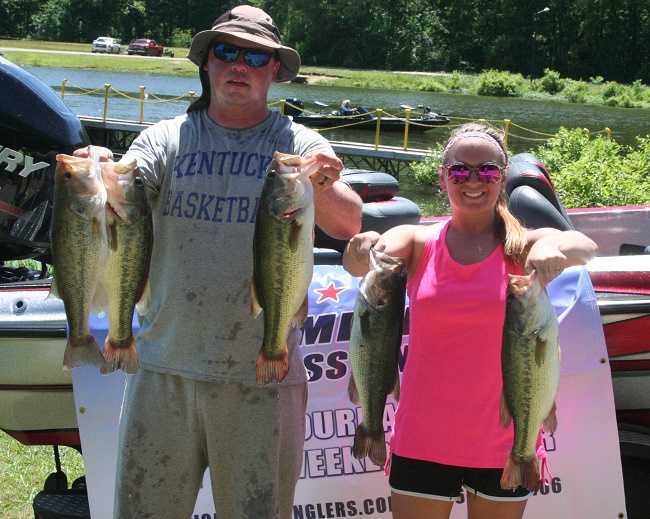 It was one rough day on Kentucky Lake, June 3, 2018 for the ABA Couples Series. The wind was in excess of 20 mph most of the day and the rollers were nearing 5 feet nearly all day.  Eighteen very good and determined teams were up to the challenge.  Other than the wind it was a beautiful day.  The air and water temperatures were in the low 80s.  The bass were in a biting mood if you could locate them!  The wind made that very difficult for many.  Thirteen of the eighteen boats weighed in a total of 28-bass for 91.19-pounds, all released alive, healthy and happy.  We paid out four places for a total of $1,530, including big bass for both men and ladies.

Cory and Meaghan York took their second win of the year by literally lapping the field.  They brought a 5-fish limit to the scales for a total weight of 20.53-pounds. That limit was topped off with the Men’s Big Bass winner of 5.10-pounds.  Cory and Meaghan were somehow battling the rough waters south of Paris Landing using a Zoom worm on ledges.  Cory and Meaghan took home $690 for their hard and successful work. 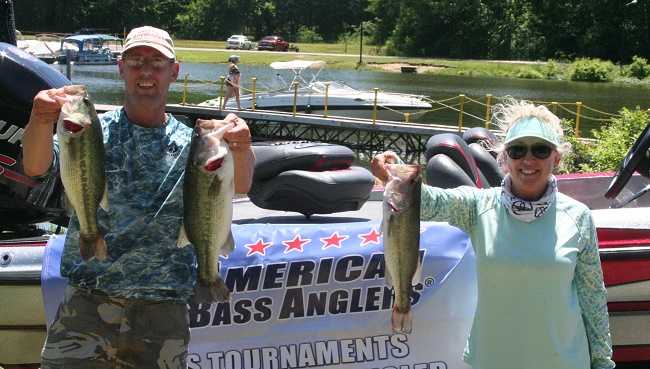 Our 2017 ABA Couples National Champions, Joe and Tracy Zalewski, visited our division for the first time this year to claim second place.  It was great to see Joe and Tracy again.  They were able to bring 3-fish to the scales with a total weight of 10.43-pounds.  Their bag was anchored by a nice 4.33-pounder caught by Joe using a big worm on ledges in the Big Sandy River.  Joe also said they caught their last fish with just minutes to go, proving that you should “always keep casting until time runs out”.  The Zalewski’s claimed $350 for their effort. 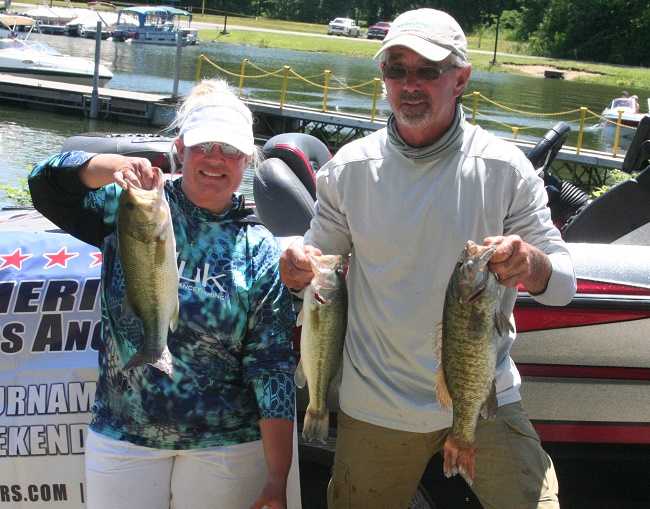 Bob and Cindy Linton took third with 3-fish tipping the scales at 8.93-pounds.  Bob and Cindy made a 15 mile run in horrific waters to get to their fish.  They were using jigs on ledges.  Their fish were led by a nice 3.92-pound kicker caught by Bob.  He was quite happy that the netting duties were handed over to Cindy this tournament, in contrast to the last one!  The Linton’s took home a well-deserved $250 for their efforts. 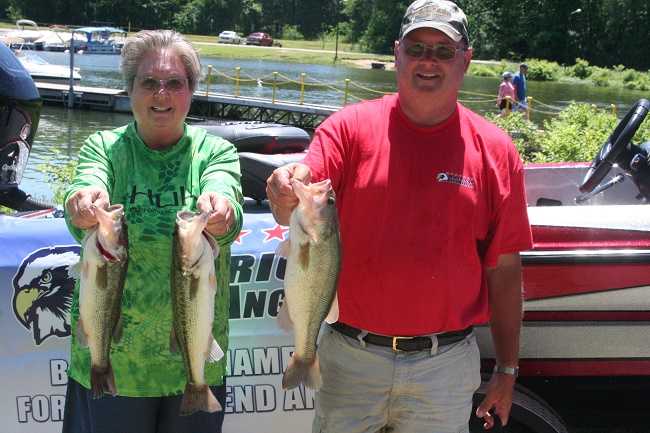 The winners of our last tournament, Jay and ShariHolsaple, took 4th place this week.  They were able to bring 3-fish to the weigh-in totaling 8.58-pounds.  Jay and Shari caught their fish on small worms and crankbaits on points inside bays south of the 79 bridge. The Holsapple’s collected $150 for their day’s work. 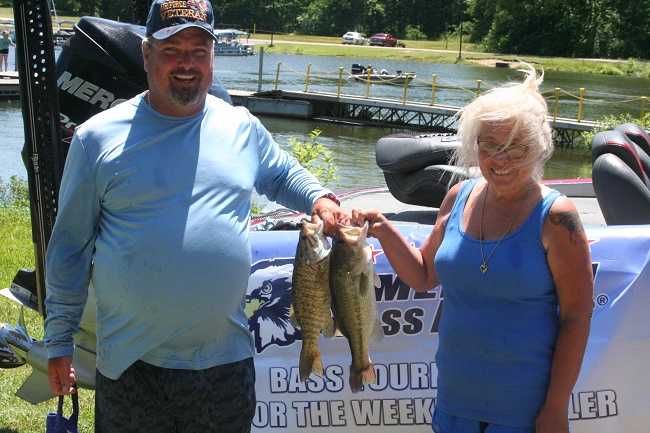 Last but not least, Ladies Big Fish was taken by Missy Steele.  She hooked up a nice 3.87-pounder to claim $90.  This is Missy’s first year to tournament fish and I believe she has taken to it quite well.  Congratulations Missy and hope there are many more winnings in your future.

We had two new teams join us this week.  We want to give a huge and sincere ABA Couples Kentucky Lake welcome Phillip and Marti Rowan of Indianapolis, Indiana.  Also, newcomers David Bowman and Paula Keller of Paducah.  We enjoyed having you and hope you join us for many more events.  Thank you!

As always, some prizes were awarded by drawing three teams that did not finish in the money.  They each received 100 count packs of soft plastic baits in the drawing.  We will be giving away much more in future tournaments, along with a great BBQ and hundreds of dollars of prizes at our last event at Big Bear.

Donna and I want to thank everyone for joining us in this trail.  We would also like to thank everyone for all the prayers and well wishes for Donna as she recovers from her unfortunate accident resulting in a fractured vertebrae.  She has a long slow road to recovery, yet hopes to be back soon. We have a great group of competitors that are great sportsmen and friends.  Everyone seems to have a great time and willing to help each other, even when the fishing and conditions are tough.  We are proud to be associated with these great fishing enthusiasts.  Invite friends and family to join us.  If we can reach the point of having over 30 boats we will be paying nearly $1,000 for 1st place!

Our next tournament will be held on Kentucky Lake at the KenLake Ramp on June 24th.  I would expect more 20 pound limits from multiple teams at this tournament. The fish should be settled into their legendary summer ledge pattern and ready to cooperate!  Please note the new tournament hours for the remainder of this season. We will launch at 5:30 AM and weigh-in at 1:30 PM.  We will be at the ramp for boat check and late registrations at 4:30 AM.