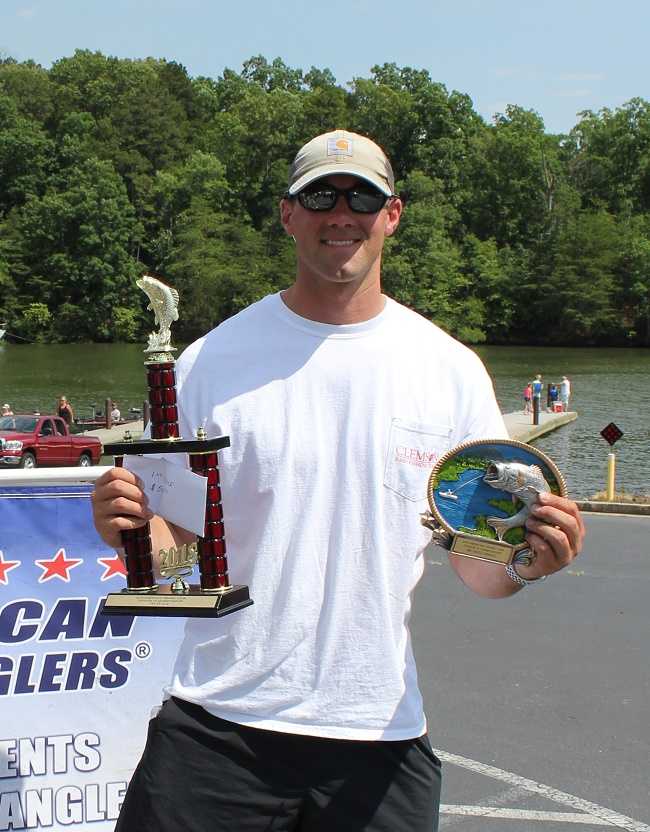 It was hot and muggy throughout the two-day championship on Lake Norman, with mostly sunny conditions and light and variable winds.  A field of 18 anglers turned out to fish and face yet another change in the weather and fishing patterns.  The heavy downpours throughout the two weeks preceding the championship had the lake level full to the brim with lots of debris floating down the lake from the effort to control the massive amounts of water dumping into the river system.

Reid McGinn of Fort Mill, SC was able to put together a winning strategy by pitching and skipping a jig on the many docks of Lake Norman and capitalizing on an early topwater bite with a POP-R.  He reported that it wasn’t easy, and he had to hit as many docks as possible each day to put together a good bag.  Reid was in third place after day one with a 10.39-pound sack.  He put together another limit on day two with 5-fish weighing in at 14.67-pounds, giving him a total of 25.06-pounds.  Reid was able to wrestle a nice 5.02-pound largemouth into the boat on day two taking big bass honors worth an additional $180.00 to add to his first place purse of $1000.00.

Special thanks to Muffin Top Jigs, and Forage Lures for providing products for all of our anglers to enjoy.

Congratulations to our top finishers.  Division 14’s next event is yet to be determined.  Our new schedule will be out as soon as it is finalized.

Next Event: The next tournament in division 14 is TBD.

For information about this division and future events visit drawtrail.com or contact the local director for North Carolina-Charlotte – Lance Eckford at (919)628-3383.

American Bass Anglers, Inc. can be contacted at (256) 232-0406 or visit AmericanBassAnglers.com