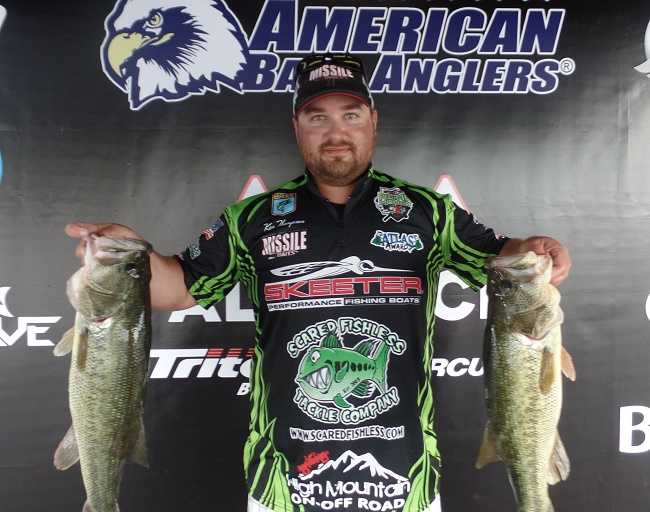 ATHENS, Ala. – Ken W. Thompson won his second tournament with the American Bass Anglers Open Series NE, Maryland Division, held June 2nd on the Chesapeake Bay. Running out of Anchor Boats Marina in North East Maryland, the Roaring Spring Pa angler caught five bass weighing 23.00 pounds. He anchored his bag with a 5.24-pound kicker. For the Boater Division victory, He also had the big bass for the boaters at 5.24 lbs. Thompson took home a check totaling $5500.

“I threw a swim jig all day,” Thompson said. “I fished some grass that I found a couple of days ago.  I threw a 3/8 oz. black swim jig all day. I only had about 8 bites, but they were the right ones.”

In second for the boaters, Steve Allender of Rosedale, MD landed a five-bass tournament limit going 19.00 pounds with a 4.16-pound kicker.

Barton Wines of Marshall, Va took third for the boaters with five bass going 18.86 pounds. He anchored his catch with a 5.23-pound kicker.

“I dragged a shaky head around all day. It was all Luck! I just stayed on the grass flats and dragged a green brush hog with a chartreuse dipped tail,” said Wines.

Finishing fourth, Timothy A. Reams of Oakland, MD, landed a five-bass limit for 17.87 pounds including a 3.84-pound kicker. Michael V. Piccolo of Croydon, PA rounded out the top five boaters with five bass at 16.10 pounds. 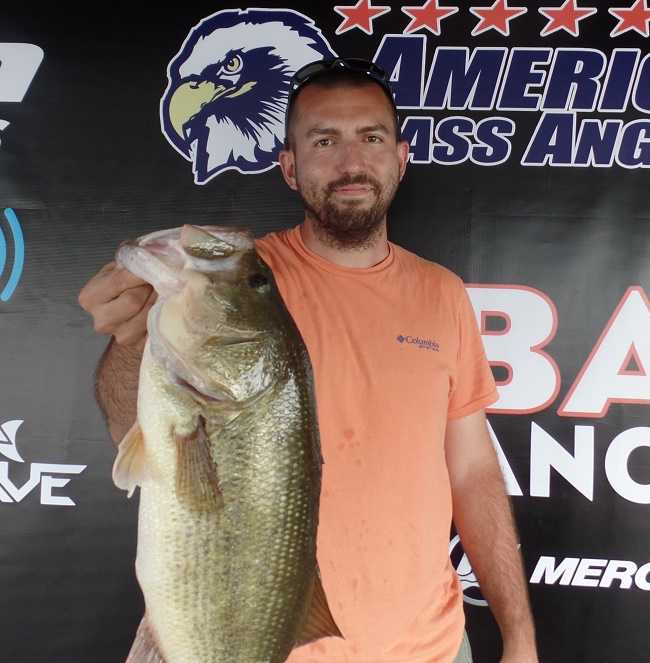 In the Co-Angler Division, Danny Moffat Jr from White Plains, MD. won with a three bass limit going 14.09 pounds. He sealed his victory with a 6.86-pound kicker, which was the big bass for the tournament. Total he pocketed a check for $1500 for the win, $250 for the big bass and he received a Abu Garcia Revo reel valued at $159.

“We were not on the flats, we moved around all day. I only got 3 bites all day but they were the right ones. I caught them in 3 different spots. We fished 3-5 foot of water.  I used a shaky head with a purple worm for all of my fish,” said Moffat.

Taking second for the co-anglers, Larry Wigmore of Smyrna, DE, brought in a three bass division limit weighing 13.37 pounds including a 4.83-pound kicker.

“I threw a 3/8 oz swim jig in black and blue. We stayed on the grass flats and moved around. I have to thank my boater Ken Thompson he put us where we needed to be,” said Wigmore.

David L. Wilt of Lititz, PA, placed third among the co-anglers with three bass going 12.86 pounds. He anchored his catch with a 4.27-pound kicker.

“I have to thank Steve Allender my boater. We stayed in one place all day away from any other boats. We just kept chucking baits. What we threw I can’t say with respect to Steve,” said Wilt.

In fourth place among the co-anglers, Karl K. Wynn of Millersville, MD, brought in three bass for 12.05 pounds including a 5.05-pound kicker. Dante Gray of Ruther Glen, VA finished in fifth place with three bass at 11.10 pounds topped by a 4.58-pound kicker.

Slated for September 22nd and 23rd, the next divisional tournament will be the2 day championship held on the Kerr lake out of Nutbush. At the end of the season, the best anglers from across the nation advance the 2018 Ray Scott Championship, slated for slated for the first week of April 2019 on Lake Eufaula, AL.