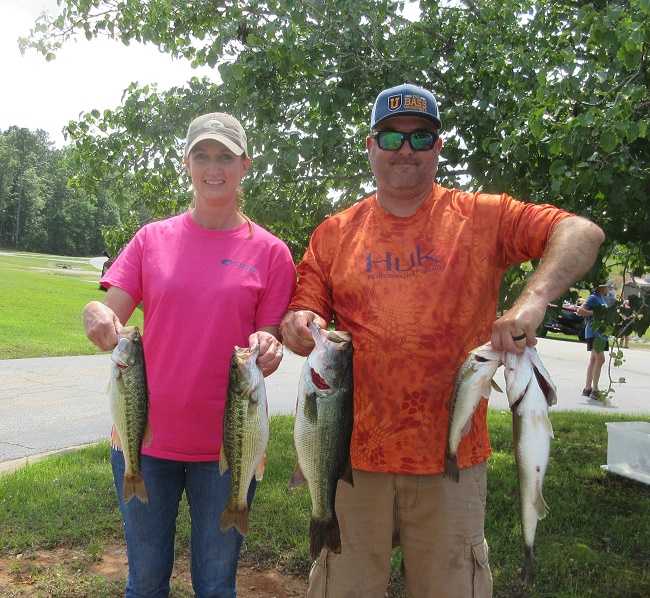 Tricia and Bill Cain took first place honors in South Carolina Couple’s May 19 Lake Russell tournament.  Twenty-eight teams chose to go fishing despite the threat of scattered thunderstorms, and the day proved pleasant and dry.  All teams at weigh-in had 5-fish limits.  They all did an excellent job caring for their fish during the day.  97% of these were released to be caught again another day. 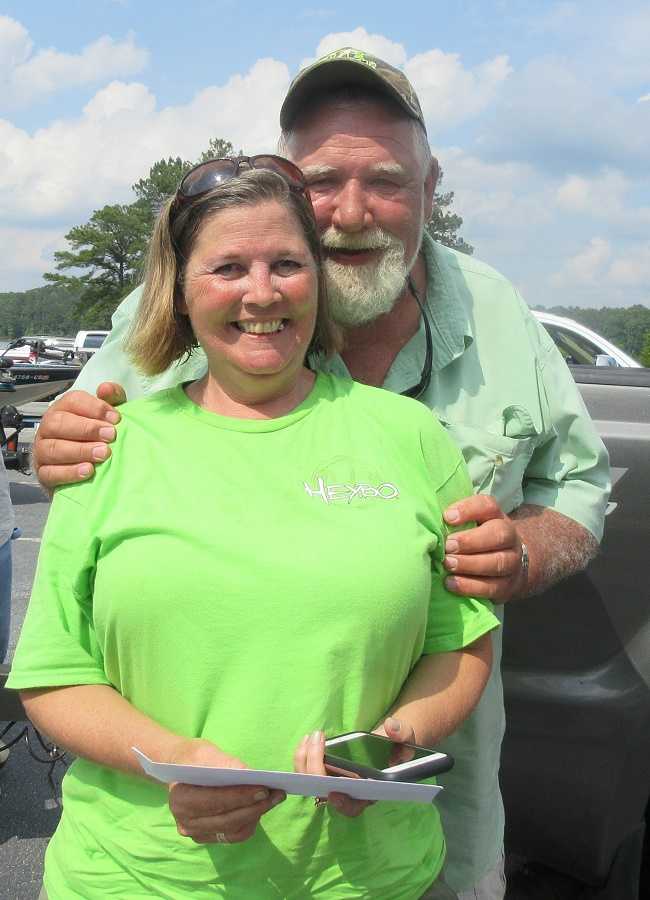 Tammy and J.B. Wicker were close behind with 12.1 pounds.  Their second place sack included J.B.’s 3.94-pound Men’s Big Bass.  Tammy also had an awesome 3-pounder.  Their fish came on topwater baits throughout the day.  This solid finish is most fitting because this was their 34th wedding anniversary.

Julie and Jim Collins took third place with 11.8 pounds.  The sack included Julie’s 2-pounder and Jim’s 3.8-pounder.   Their 5-fish limit came on topwater and spinnerbaits.  Jim noted that they were pleasantly surprised by their success because they found only small fish on their Friday practice day.

Susan and John Mills were in fourth place with 11.13 pounds.  Susan’s 3.4-pound Lady’s Big Bass anchored their catch.  Their fish came on Texas rigs and shakey-heads.

Victoria and Dale Goff claimed fifth place with 11.06 pounds.  It was no surprise to the weigh-in crowd that Zoom Baby Brush Hogs were key to their solid finish.

Mary Ann and Craig Sahms were “just out of the money” with 10.9 pounds.  They took home a $50 gift card from Angler’s Headquarters for their achievement.

Thanks to the many sponsors of the South Carolina Couples for offering drawing prizes to folks not getting a check.  Weeble Lures, Hallmark, Phantom Outdoors, Strickland Marine, Angler’s Headquarters, Yo-Zuri, Jervey Eye Group, EltaMD and Dr. Caroline Price.

Several teams got together for a fun dinner Friday night at Elberton’s La Fogata restaurant.  Several more teams had an impromptu gathering at the Red Minnow Lighthouse restaurant following the tournament.  It seems folks are enjoying the Couples Series for more than just fishing competition!

The South Carolina Couples next tournament is on Lake Greenwood, June 9, 2018.