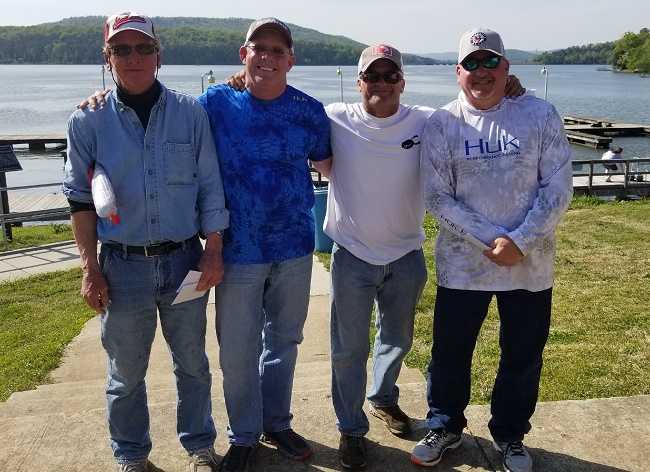 Division 29, Alabama North, Larry Laney of Bryant, Al is one step closer to the 2018 ABA National Championship with another 1st Place win during the American Fishing Tour bass tournament held at Lake Guntersville on the 21st of April. 18 anglers fished this event with four of them finding limits.  The temperature started out at 54 degrees and was slick calm during the first hours.  The wind kicked up about lunch time and seemed to kill the bite for most people.  Larry credited a crankbait bite for his 15.48-pound winning stringer.  James Stoler was blessed with a strong start on a rattle trap to end up in second with 13.86 lbs.  Ken Draskovic threw a stick worm to catch his 13.00 lb limit for 3rd.  Retired Navy Veteran and expert Co-Angler, Chuck Quann won the big fish award with a 6.82-pound giant.

These anglers are acquiring valuable points to ensure their birth in this division’s two-day championship and the American Fishing Tour 2018 National Championship on Lake Hartwell.

Their points are also being used to determine the divisional angler of the year. The top angler by points earned in this division will represent the division in the Angler of the Year final round.

Conditions Wind was calm, and the temperature started at 54, warming to 65degrees withwind increasing to 18 mph.

Next Divisional Tournament: This division’s next tournament will be held 19 May 2018 on Lake Guntersville out of Goosepond.