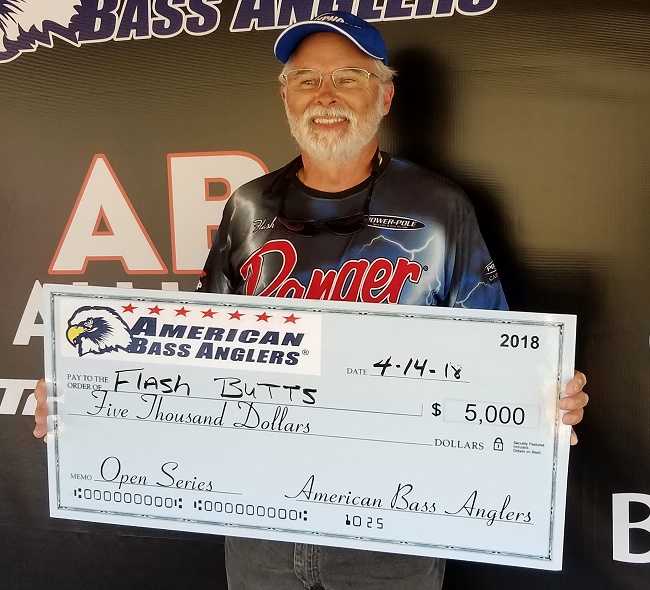 ATHENS, Ala. – Flash Butts of Roanoke Rapids, North Carolina won the American Bass Anglers Open Series event held 4/14/2018 on Lake Gaston. Running out of Holly Grove Marina in Bracey Virginia, Flash weighed in a five-bass limit weighing 15.97 pounds, with a6.25 pound kicker. For the win he took home a check for $5000.00. For having the biggest bass weighed in for the boaters Flash took home an additional $920.00.  Also, for having the biggest bass of the tournament and because the bass was caught using an ABU Garcia reel Flash took home an ABU Garcia reel valued at $160.00.

“It’s really no secret, I found a pocket I could catch a quick limit sight fishing. I caught five in about 30 minutes including the big fish. I was able to cull up a couple of times during the day,” said Butts.

In second for the boaters Jared Sasnett of Kinston, North Carolina landed a five bass limit weighing 15.61 pounds. Jared took home a check for $1700.00 for the effort.

“I caught five keepers today. I caught one on a buzz bait and the rest sight fishing a jig,” said Sasnett.

Shawn Hammack of Gasburg, Virginia took third for the boaters with a five bass limit weighing 14.72 pounds. He took home a check for $1130.00 for his catch.

“The day started slow for me. I was sight fishing but I kept losing them. I finally started getting them in the boat around 11:00. I think I caught around 15 bass today,” said Hammack 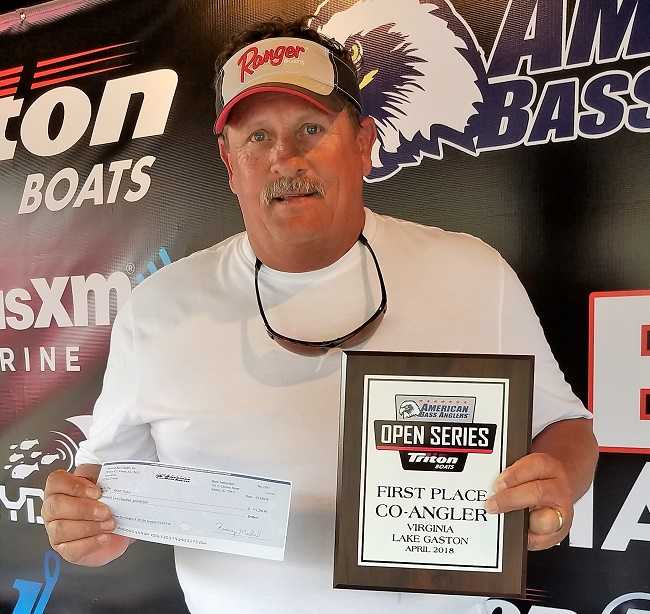 In the Co-AnglerDivision Ralph Taylor of Rockville, Virginia weighed in a three bass limit weighing 8.30 pounds, anchored by a bass that weighed 4.69 pounds. Ralph took home a check for $1200.00 for the win. He also collected an additional $110.00 for weighing in the largest bass caught by a co-angler.

“I had most of my weight in about 45 minutes on a spinnerbait. I was able to cull up on my small fish a couple of times,” said Taylor.

Taking second for the co-anglers, Michael Trivette of Blackstone, Virginia brought in a three bass co-angler limit weighing 7.63 pounds. He collected $400.00 for the effort.

“I caught three bass within the first hour and I caught them on a Neko rig,” said Trivette.

Ernest McIntyre Jr. of Fayetteville, North Carolina placed third among the co-anglers with three bass weighing 7.53 pounds. He earned $350.00 for the effort.

“I Caught probably nine fish today, all on a weightless senko,” said McIntyre.

In fourth among the co-anglers Travis Garrett of Charlottesville, Virginia weighed in a three bass limit weighing 6.62 pounds and rounding out the top five was Cameron Newhouse of Manson, North Carolina with three bass weighing 6.41 pounds.

Slated for June 23, 2018 the next Virginia Division tournament will be held on Kerr Lake Launching from Nutbush Park in Henderson North Carolina.