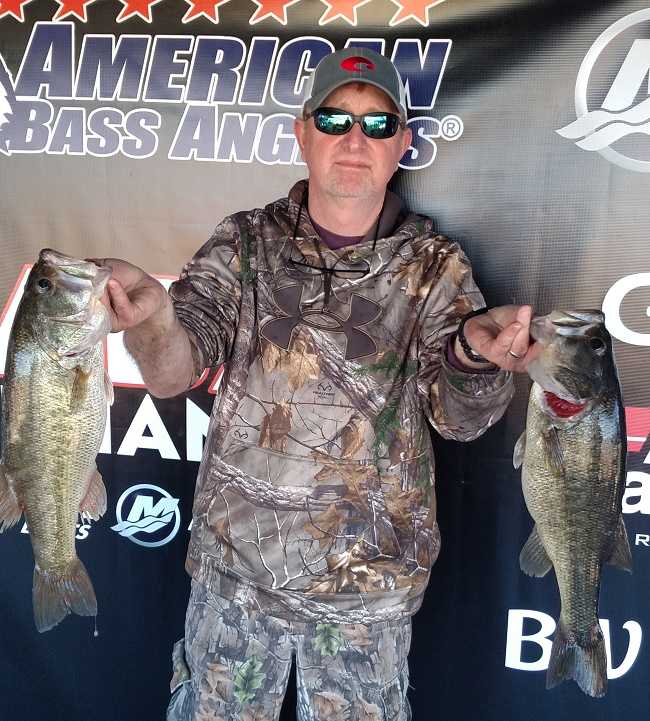 ATHENS, Ala. – Eddie Armstrong of West Point, MS won the American Bass Anglers Open Series Mississippi Division, held March 3rd on the Columbus Pool. Running out of Columbus, MS, the anglers faced a tough challenge due to large amounts of rain staining the water and making conditions extremely difficult prior to this event.  Warm temps, a beautiful sunrise, and a picture-perfect weekend to be on the water found very few anglers able to find the right bite.  At the end of the day there were only 4 boaters able to break 13 lbs.

Eddie Armstrong caught a solid five-fish limit weighing 16.28 lbs with all 5 of his fish looking like they were from the same family.  For the boater division victory, Eddie took home a check for $5000.00

“I threw a jig and a chatterbait all day.  I caught 10 keepers and a bunch of short fish.  I didn’t go more than a mile, but the bite was very consistent.  I was able to get some decent fish to get the 16 lbs that I had.  The weather finally gave us a break with the sunshine and the fishing is not near as good as it could be right now but it’s getting better.” Said Eddie.

In second for the boaters, Stephen Williams of Columbus, MS brought in a five-bass limit weighing 14.78 lbs.  He collected a check for $800.

“I kept a flipping stick in my hands all day.  I didn’t run very far.  You could have watched me most of the day from right here really.  I caught 12 keepers and culled quite a bit, probably over 20 fish for the whole day.” Said Williams

Curtis Laster of Morton, MS, placed third for the boaters with a limit of five bass weighing 13.18 lbs and took home a check for $600.00

“I started up near HWY 51 and threw soft plastics all day long, I caught a couple limits and had a great day.  No big bite but I’m happy with the results.”  Said Curtis.

In fourth, Alan Smith of Brandon, MS had a limit for 13.13 lbs, and Brandon Bolton of West Point, MS came in just behind AJ with a bag of 12.67 lbs to take the fifth-place honors.  The biggest bass for the boaters was also caught by Brandon Bolton weighing in at 5.54 lbs. for $530.00. 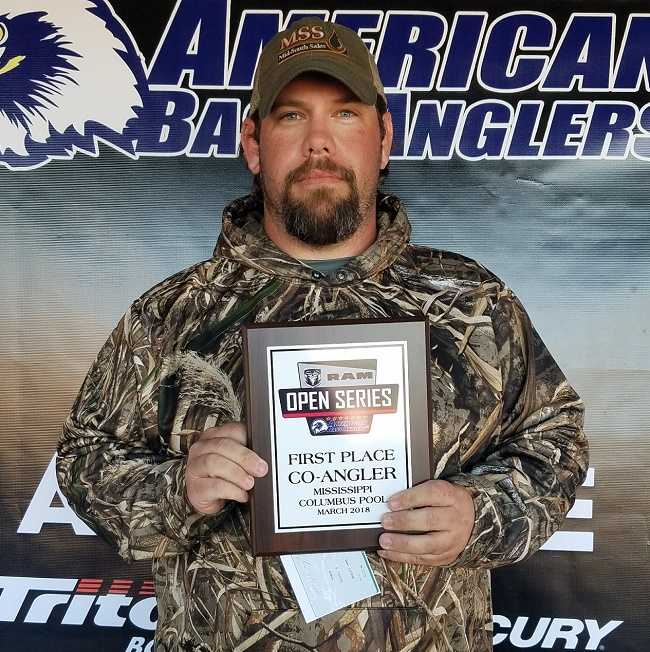 In the Co-Angler Division the top three were separated merely by ounces.  Justin McKee of Pheba, MS, topped the list with a 3-fish limit at 6.09 lbs, just .06 above the field.  His performance filled his pocket with a check for $850.00 on the win.

“It was a grind.  It took me all day to catch what I had.  I was throwing an ultra-vibe speed worm and never put it down.  I only had 3 keepers, so I didn’t get the chance to cull.  I did catch 5 fish but the other 2 were short.” Said McKee.

Taking second for the co-anglers and fishing for the first time with us as a last-minute entry by his peers was Ricko Roberts of Newton, MS.  Ricko was less than once ounce away from a victory in his first event and assured us he would be back for another opportunity.  Ricko came in weighing a 3-fish limit for 6.03 lbs. His placement earned him a check for $250.00

“My boater put us on some pretty good fish today.  We caught them all on a TX-rig in junebug color and the bite was consistent.  I caught around 8 fish, the weather was nice, it was a great day and a lot of fun.” Stated Roberts

Josh Williams of Collierville, TN placed third among the co-anglers with just 2 fish, one as Coangler big bass at 2.82 lbs, and his total weight of 5.57 lbs to earn a check for $200.00

“I caught my fish flipping and throwing a spinnerbait.  I caught about 20 fish today but only 2 of them were keepers.  The first one was early in the morning and my last one was after 2 PM.  I had a great day catching but just didn’t get the keeper bites.” Stated Josh.

In fourth place among the co-anglers, Lance Jackson of Starkville, MS had 2 fish for 5.01 lbs.  Valerie Harrelson of Glen, MS brought in three bass for 4.87 lbs.

Well done to all!

Slated for April 14th, the next divisional tournament will be held on Ross Barnett Reservoir launching from Tommy’s Trading Post.  At the end of the season, the best anglers from across the nation advance to the 2019 Ray Scott Championship, slated for the first week of April 2019 on Lake Eufaula, AL.