Russell Clark Wins a Cold One on Clarks Hill 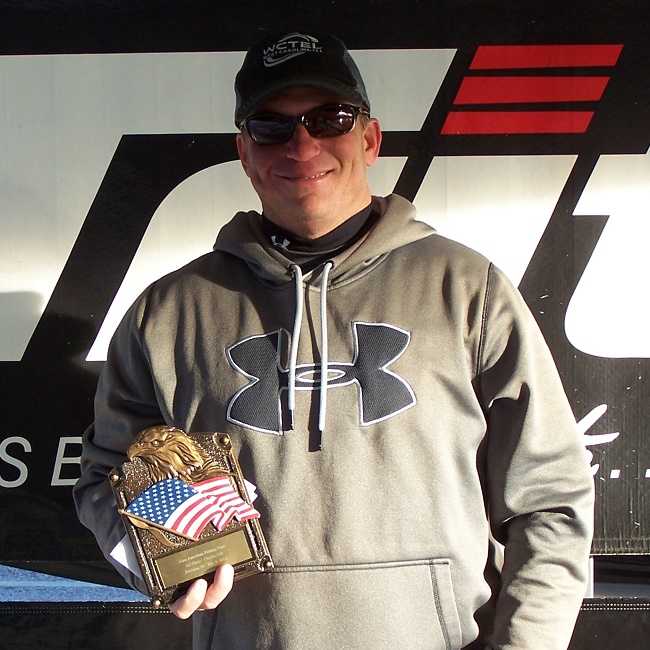 This was a cold day. Started out at 12 degrees and was at 34 degrees by the 4 pm weigh-in. Because of the cold we started out at 8am. Mostly sunny skies all day long and a wind out of the ESE at 5 to 10 mph. Clarks Hill Lake is at 9 feet below full pool with surface temp in the mid-40s. About six anglers were impacted by the cold temperature with boat problems. They ranged from battery problems to frozen shifter linkage, frozen steering and one frozen lower unit on the trip to the lake. Apparently, the seals in the foot let water in and mixed with the lube. The cold ride at 12 degrees froze it and busted the lower unit housing.

There were 18 anglers fishing this Division 96 1-day qualifier tournament out of the Dorn Boating Facility near McCormick, SC.

First place, Russell Clark of Abbeville, SC had 5 fish weighing 23.67 pounds that was anchored by a kicker fish at 5.86 pounds. His total weight takes the lead for the Level Performance Rod Big Sack Rod. Russell caught his fish on jigs fishing rocks in the middle part of the lake. The combined payback for first place and first place option pot earned Russell $610.

Jonathan Botts of Abbeville, SC was second with 5 fish weighing 22.36 pounds which included the 9.45-pound tournament big fish. The big fish puts Jonathan in the lead for the ALX Rod Big Fish Rod. He caught his big fish on a Shad Rap fishing the upper part of the lake. The rest of his fish came on a jig and a medium diver crank bait fishing creek channels. Jonathan took home $448 for second place, second place option pot and big fish.

Shane Abbott of Ninety-Six, SC took third place with 5 fish weighing 17.56 pounds which included a 4.73-pound kicker. Shane caught his fish on a jig fishing the lower part of the lake. He was targeting rocks and hydrilla. He won a total of $94 for third place.

Fourth place was Truett Hill of Laurens, SC with 4 fish weighing 9.38 pounds. Truett won a $25 coupon from Wolfstone Tungsten for his fourth-place finish.

Fifth place was Danny Ashley of Donalds, SC with 4 fish weighing 8.54 pounds that included a kicker fish of 5.45 pounds. Danny won an ALX Rod Hat and a $50 off coupon towards the purchase of an ALX Rod.

These anglers are qualifying to compete in the 2018 Ram AFT National Championship on Lake Hartwell in Anderson, SC on October 21-26, 2018.

The next Division 96 tournament for Division 96 will be on Lake Murray out of Dreher Island State Park near Prosperity, SC on February 25, 2018.