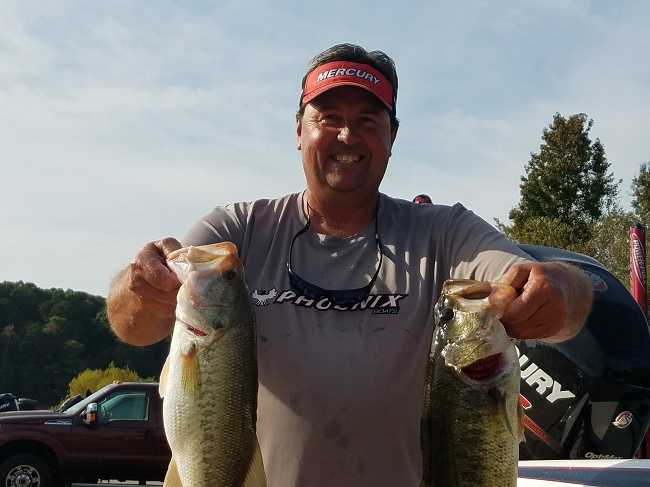 Mark Inman of Greensboro, NC won the RAM American Fishing Tour presented by American Bass Anglers Virginia Division 13 tournament held October 21st, 2017 on Kerr Lake.  Running out of Rudds  Creek near Boydton, VA Mark brought a five-fish limit to the scales that locked in at 11.30 pounds.  He anchored his catch with a 3.52 pound kicker, which also took Big Fish of the tournament.  Mark took home $451 for his victory.

“I fished top water early, then switched to a jog around 10 AM.  Surprisingly, I caught my last cull fish around 2 PM when I picked up the top water bite again,” said Inman.

Second place was claimed by Tommy Marrow of Oxford, NC with a five-fish limit that went to the scales for 10.88 pounds. He anchored his catch with a 2.94 pound kicker.  He took home $254 for his placement.

Third place amongst the competitors was James Bland of Lenexa, VA with four fish and a weight of 8.88 pounds. He anchored his bag with a 3.24 kicker.  James took home $79 for his efforts.

The next event for the Virginia division will be held on the Chickahominy and James Rivers launching from Chickahominy Riverfront Park on November 11.

For more information about this Division and future events visit www.americanbassanglers.com or contact the local Director for Virginia Division 13 Gary Conner at 757-293-8651