Danny and Myra Taylor Take the win on Oconee 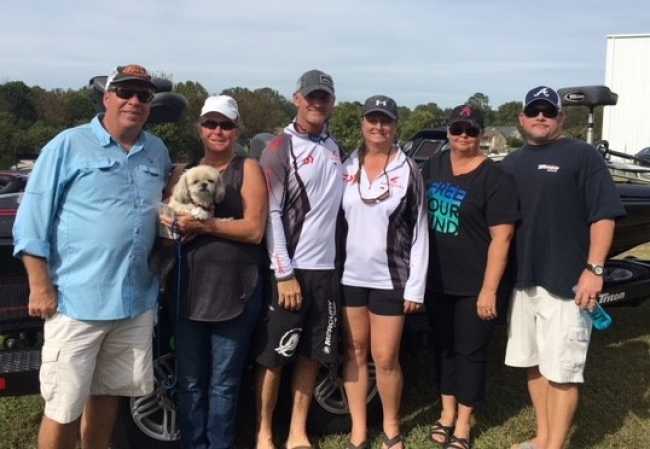 Danny and Myra Taylor of Buckhead, GA won the American Bass Anglers, Georgia Couples Division 2 tournament held October 21st, 2017 on Lake Oconee.  Running out of Sugar Creek Marina near Buckhead, GA Danny and Myra brought back a five-fish limit that locked in the scales at 10.74 pounds.  They anchored their bag with a 2.75-pound kicker.  They each took home $275 for their first-place finish.

“We fished the south end of the lake, on deep humps and flipping docks.  We caught our fish throwing jigs, soft plastics, and Carolina Rigs,” Stated the Taylors.

Taking second was Tracy Burnsed and Tara Daniel, both from Eden, GA, with a five-fish limit that went 8.61 pounds on the scales.  They anchored their catch with a 2.22-pound kicker.  They each took home $162.50 for their efforts.

“We stayed shallow all day, pitching soft plastics around boat docks.  We only had five bites today and landed them all for the five fish we brought in,” said Tracy.

Third place was claimed by Sean and Kathy Capes of Sharpsburg, GA with three fish that locked in the scales for 6.27 pounds.  They anchored their catch with 2.67-pound kicker.  They each took home $87.50 for their efforts.

“We stayed in the Sugar Creek area.  We caught some early in the day on crankbaits, then ran around and caught some short fish”.  We moved up the river a little way and caught one more on flipping plastics around boat docks,” said Capes.

We had 14 boats total.  General water clarity was stained up the river; the main lake was mostly clear but stained in a few areas.  Water temperature reported was 72-75 degrees for the day. Everyone reported that it was tough fishing for the day. Only two boats had a five fish limit.  Most boats had three or less and four boats had zeros.

We purchased some door prizes for the teams that didn’t finish in the top three.  We held a drawing for a ladies and men’s prize.  Jeff Carreker won a bottle of Keep Alive for his live well and Genevra Fields won a Turvis cup.  Everyone had a great time with fun and fellowship.

Our next tournament will be held on Lake Hartwell, going out of Tugaloo State Park on November 18, 2017 and another one at the same location on the 19th.  This will be our 3rd and 4th events for the year.