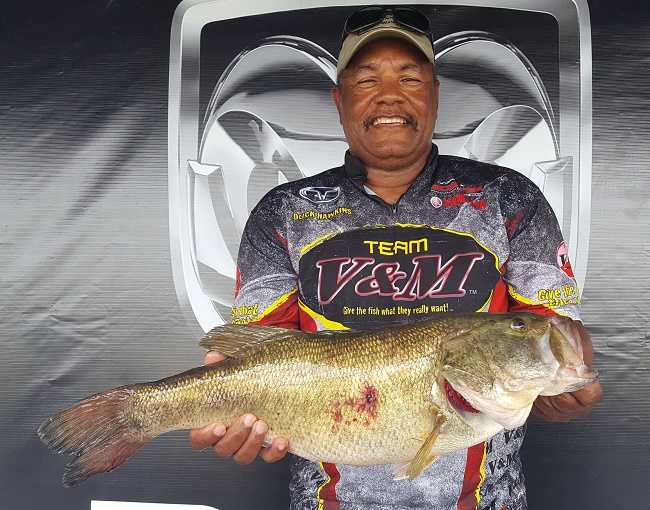 Joel Hawkins won the American Bass Anglers Ram Truck Open Series Texas East Division, held June 17th at Lake Bob Sandlin.  Running out of Public Ramp No 1 near Mt Pleasant, TX, a picture-perfect morning with a slight breeze set the day at takeoff with partly cloudy skies.  The field was able to take off right on time around 5:45 AM.  Weigh in started at 2 PM still giving the anglers over 8 hours to fish as the heat index pushed over 100 degrees and made it a welcome to come off the water.

“Man, Scott Dean and I were doing the exact same thing today with almost the same bait. I was throwing a Carolina rig with June bug but the big fish came on a 6 XD.  When she hit, it felt like I hung a stump, then it moved…  I hollered at my partner to get the net and look in the side compartment for my other pair of shorts because I may need them too!  She jumped about 3 times just like a smallmouth but I have to say this.  These coanglers that fish with us are some great anglers.  I had Jeff Grubbs with me today. He asked me this morning if I wanted him to net my fish and I told him, if I need it you will know.  He was right there and knew exactly what to do, and how.  It was awesome.  The last time I fished this lake was 1998 and I won that tournament, and 30 minutes after we took off this morning I had almost 20 lbs.  I think I may start fishing here some more.” Said Hawkins.

In second for the boaters, Carlisle Tire and ABA Pro Staff member Scott Dean of Terrell, TX landed a five-bass limit weighing 18.12 lbs held up by his 8.28 lb kicker.  He collected $700.00.

“I was doing the opposite of my buddy Jackie today, I was out deep.  I caught most of my fish on a 6XD between 14-16 ft.  A lot of the fish were suspended a bit and you just had to crank a lot to get the bites.  Most of them would hit the bait just as it came off the bottom and started to lift it back to the boat. The fish moved around a little bit and you had to try and stay with them but catching an 8 lber sure helps a lot.” Said Scott.  Scott is also going to receive a check from Triton Boats as the highest placing Triton Gold member for the event.

Jackie Jayroe of Royse City, TX took third for the boaters with a limit of five bass weighing 17.81 lbs.  Jayroe took home a check for $500.00

“It worked out pretty good.  I didn’t get the chance to practice but I found the right water and stuck with it all day.  I didn’t have to start the big motor but to run up there and come back. We were up above the bridge flipping shallow water cover.  I got to cull one time catching 6 keepers throughout the day but had a lot of fun with 3 bowfin.  They hit hard and fight good, get you wound up, then let you down when you see what they are.”  Said Jackie.

In fourth, Keith Jones of Texarkana, TX came in with a solid bag locking in at 16.93 lbs.
Finishing 5th was Owen Windham of Little Elm, TX with 16.46 lbs. 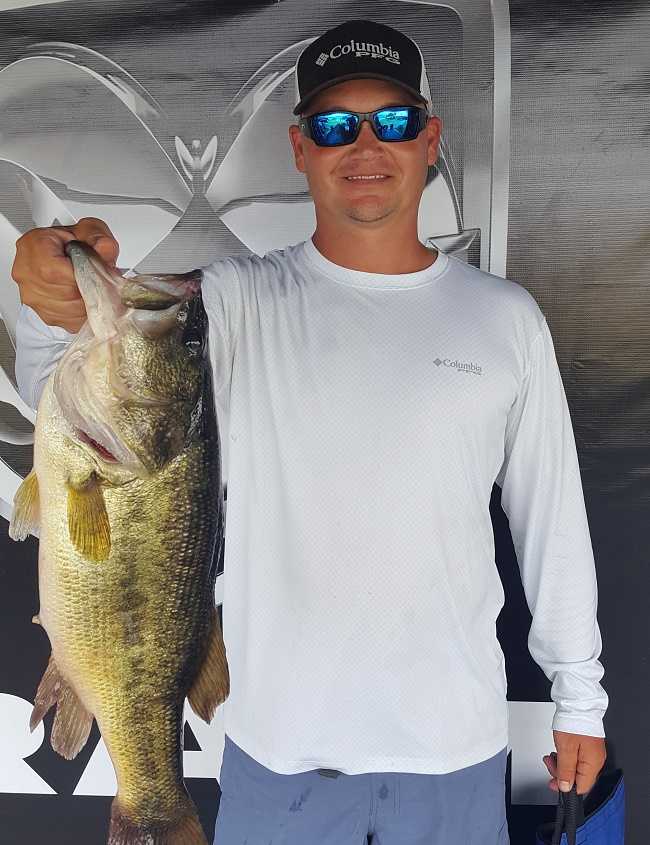 “We bounced around the lake all day long and I stuck to my one bait.  A frog. I had confidence in it and caught a lot of fish but only had 3 keepers.  The 7 lber bit right around 12:00 and that’s what sealed the deal for me.” said Michael.

Taking second for the co-anglers, JoeFrank Thomas of Forney, TX came in weighing a 3-fish limit at 10.06 lbs. His placement earned him a check for $400.

“It was really good.  I caught my fish on Berkley Power worms all day long.  We moved around the lake quite a bit too and I went through about 7 keepers, culling a few times and came in with a little over 10 lbs.  I had a lot of fun but came up just a little shy.” Thomas stated.

John Binz of Mesquite, TX placed third among the co-anglers. He had three fish weighing in at 8.71 lbs to earn a check for $350.

“The day started early for me, I managed my first keeper on a swim jig and wasn’t able to get any more bites for a while.  It wasn’t until later in the day I was able to finish out my limit.  I caught my 3 keepers and that was it.  We stayed in the same cove all day and just had to grind through them to get the better fish.” Explained Binz.

In fourth place among the co-anglers, Jeramy Marinelli of Royse City, TX brought in three bass for 8.52 lbs.

Joe Embry of Tyler, TX and Al Norman Jr of Borger, TX tied for 5th with a scale weight of 7.50 lbs.

Slated for September 16th, the next divisional tournament will be held on Cedar Creek near Log Cabin, TX.  At the end of the season, the best anglers from across the nation advance to the 2018 Ray Scott Championship, slated for the Red River in Shreveport & Bossier City, LA.