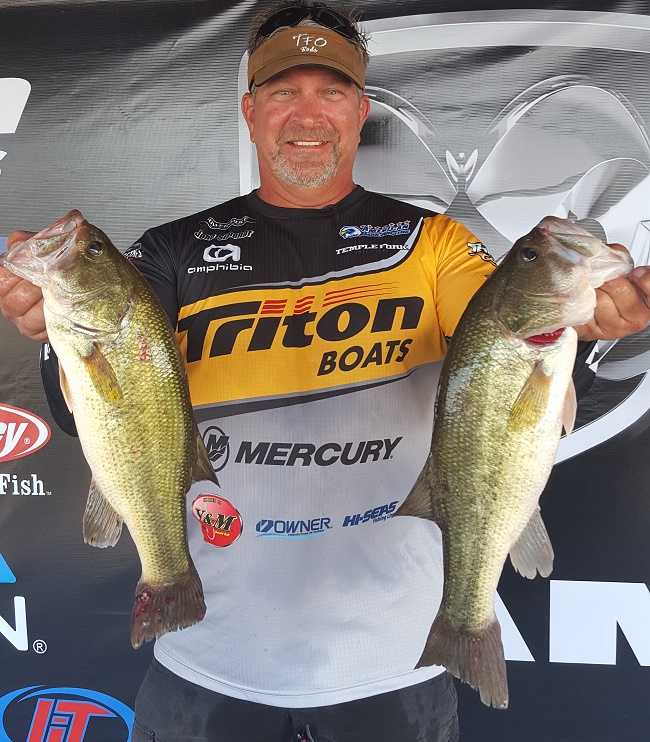 Running out of Peters Point in Eufaula Cove, Oklahoma, John caught five bass weighing 14.60 lbs.  For the Boater Division victory, Simonof took home a check for $5,000 plus more than $7,000 in contingency bonuses.

“We made a long run in the morning and I started with a solid 3+ lb keeper at the first stop” Simonof said.  “A mid-morning flurry gave me a solid limit and I continued to catch fish but only culled once.  We left them biting late morning because I knew we had a long run across some big water and the wind started blowing; I knew it was going to be a long rough ride.  We fished several places closer to the ramp but the areas were muddied up or blown out due to the strong winds.  I caught all my fish in 2-4 feet of water on a homemade bladed jig poured on an Owner hook with a V&M baits Baby Swamp Hog trailer thrown on a Temple Fork Outfitters 7’ 3” heavy action rod and 20lb Hi-Seas Quattro fluorocarbon line.”

In second place on the boaters’ side was Luke Palmer from Coalgate, OK. Palmer came across the scales with five fish weighing down at 13.35 pounds to lock him in to carry home a check for $1250.

“I burned a LOT OF GAS today.  I went from one end of this lake to the other. I was targeting spots where I could flip a Jig because that’s what I do here.  I covered a lot of water trying to stay in that 4-ft. range.  My last keeper came at 2:57 and I had to burn more gas to get in by 3:15.  It was worth it though.” explained Palmer.

Mark Teply out of Midwest City, OK came in just behind the second-place finisher with a weight of 12.16 pounds held down by an anchor fish of 3.69 pounds. His 3rd place finish earned him a check of $900.

“The fishing was tough for everyone.  You had to grind it out to get the quality bites for sure.  The lake is dropping right now which always makes for a tough bite.  This event was especially difficult for me with the loss of my good friend Jimbo the other day, so this one’s for him.” Teply said.

Finishing in fourth, Justin Phillips of Cucotah, OK hauled in five for 12.10 pounds. Closing in the top five boaters is Lee Sanders of Stillwater, OK with five fish weighing a total of 11.72 pounds.

The biggest bass for the boaters was caught by Kellen Davis of Spigler, OK. Fishing with the Ram Open Series for the first time, Davis landed a 5.30-pound fish to land him a check for $660. 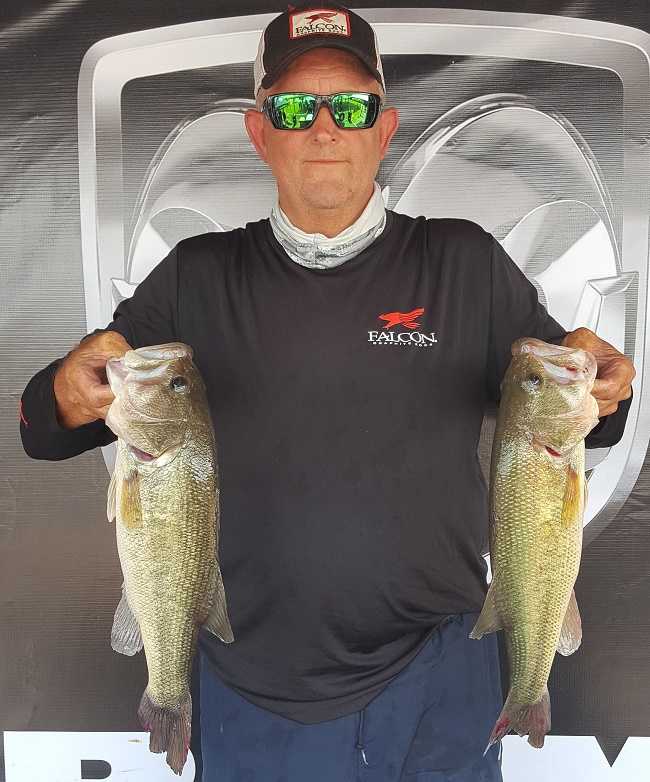 In the Co-Angler Division, Stan Forrester out of Westville, OK locked in first place well over the competition with a three-fish limit weighing 10.09-pounds.  Anchored with a 3.90-pound kicker, Forrester took home a check for $1200.

“We started out on a spot not too far from here but nothing turned up so we made a run down to the damn.  I caught my first keeper down there on a crankbait.  Nothing else happened so we made another run back up the lake, I caught another keeper there.  Later in the day we went back to the damn and I finished out my limit and culled twice to bring in what I had.” Forrester said.

Coming in second place on the Co-Angler side is Shane Cashman out of Henryetta, OK. Cashman locked in his placement with a three-fish bag weighing a total of 6.87 pounds with a 2.99-pound anchor. Cashman was unavailable for interview at the end of the event, but received a check of $275 for his efforts.

Steve Roberts of Broken Arrow, OK came in third place for the day after bringing in three fishing weighing 6.76 pounds. Roberts took home a check of $225 for his third-place success.

Roberts also managed to haul in the biggest bass for the co-anglers by snagging a 4.47-pound fish around 2:00 in the afternoon. That big bass won him an additional $180 check.

“It was a grind today.  I only had 2 keepers.  We caught a lot of fish today but I bet I threw 5 or 6 back that were short.  We made a pretty good run up the lake and were up there when the wind picked up so it was a rough ride back.” Roberts stated.

In fourth place among the co-anglers, Patrick Weir from Broken Arrow, OK brought in three bass for 6.75.  Dick Hindman of Sapulpa, OK finished in fifth place with two bass at 6.48 pounds.

Slated for August 12th, the next divisional tournament will be held on Grand Lake out of Wolf Creek near Grove, OK.  At the end of the season, the best anglers from across the nation advance the 2018 Ray Scott Championship, slated for the Red River in Bossier City, LA.